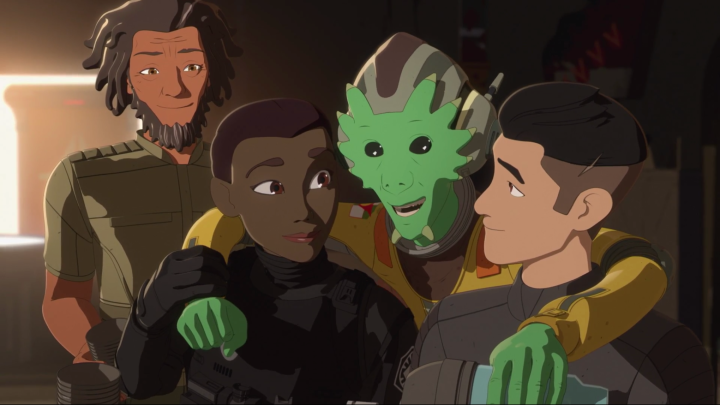 Star Wars Resistance recently came to an end after two seasons, and it wrapped up in a very satisfying way.

Throughout the show’s run I have been writing my weekly recap articles, and in those I give out grades for each episode. These grades are entirely subjective, so know that in advance, but I do compare to how other Resistance episodes have been rated and use that as an ever-evolving scale. So with the show now over, I thought we’d take a look back at my ten highest-graded episodes!

So here’s my ranking of my ten favorite episodes of Star Wars Resistance!

Sent on a mission by General Leia Organa, Poe Dameron takes Kazuda Xiono to investigate a First Order mining facility. There they encounter Captain Phasma and Major Vonreg, and Poe defies orders by engaging them in combat. Escaping and returning to General Organa, with the new intel, they realize the First Order is a looming threat.

Season one wraps up with an action-packed, emotional episode. With Kaz still reeling from witnessing the destruction of the Hosnian system (and presumably his family), he and Torra must stealthily free Yeager and Captain Doza. Together, the four put a plan in place to fight the First Order. Yeager and Kaz attempt to persuade Tam to stay, but she instead chooses to leave with Agent Tierny and the First Order. Yeager then joins Kaz and the Aces in flying to defend the station, which lifts off as they all make a desperate retreat, planning to join up with the Resistance.

Recognizing that the Aces aren’t a match for First Order TIEs, Yeager takes up the role of training them to become combat pilots, not just racers. Kaz, himself a former New Republic pilot, is officially made one of the Aces and joins them on the training missions. Meanwhile, Tam also trains as a pilot, though with the cold First Order overseeing her training. For the Aces, their training is much different, and they wind up encountering a giant monster during their training and must work together to save Yeager and make it out alive.

This episode sees Marcus Speedstar, a well-known racer, show up to the Colossus to compete in the Platform Classic. Speedstar, it is revealed, is actually the brother of Jarek Yeager, though the two are not on good terms since Speedstar was responsible for the deaths of Yeager’s wife and daughter years ago during an accident in one of his races. Speedstar is in some trouble with the Guavian Death Gang, however, which forces Yeager into the race as well. In the end, Yeager allows Speedstar to win the race, and the two make progress in repairing their relationship.

Yeager leads Team Fireball in a desperate escape from arrest at the hands of the First Order, but Tam decides to go with the enemy. The others are forced on the run in the station, but they soon come up with a plan to send a cry for help to the Resistance by disabling the First Order communications jammer. In order to do this they must sink the Colossus, which requires the help of Captain Doza. While he does that, Kaz and Yeager travel to the jammer, and they are ultimately successful in sending a message to General Organa, though Yeager is captured. Organa sends a reply to Kaz telling him that they can’t send help at the moment, leaving Kaz and the others to take matters into their own hands.

The Colossus finally makes it to D’Qar, intending to join up with the Resistance, but they find it deserted and find evidence of a major battle that had recently taken place there. With the station desperately needing coaxium, Kaz and the others (including the pirates) decide to infiltrate one of the damaged First Order ships to retrieve fuel. Unbeknownst to them, however, Tam has reported a transmission from Kaz to the First Order superiors, and they track the Colossus to D’Qar. The Aces defend the station just long enough for the coaxium to be used and allow them to escape.

The Colossus has found a new home on Aeos Prime, and Kaz decides that it is time to leave and join the Resistance. Before he can meet up with them, however, he discovers a First Order probe droid, and though he destroys it, he knows the First Order will soon find them. He manages to repair the Fireball enough to return to the station and warn the others just as the First Order arrives. The Aces must fight the First Order TIEs (including one flown by Tam), while the Colossus is forced to flee its presumed new home.

Each year on Torra’s birthday her mother meets up with her and Captain Doza, making it the one time their family is united together. Venisa Doza is a pilot for the Resistance, but she narrowly misses meeting up with the Colossus and is instead captured by the First Order. She manages to escape and encounters Tam, trying to persuade her to leave the First Order. Tam does not join in, but she does allow Doza to leave, while back on the Colossus the Aces celebrate Torra’s birthday.

Venisa Doza finally reunites with her family, and she enlists Kaz, Torra, and Hype to join her on a mission for the Resistance to escort new recruits from Dantooine to the Colossus. They easily dispatch a squadron of TIEs, but more soon arrive, including Tam’s squadron. The Aces and the Resistance fighters both attack the TIEs and defend the transports, but one of them is destroyed before the heroes can escape. In the aftermath of the battle, Tam is promoted to squadron leader, while Captain Doza officially joins the Resistance. In the series finale of the show, Kaz and Yeager get a coded transmission from Tam wanting them to meet her on Castilon. They do, and Tam takes out the other TIEs with her in order to join up with her old friends. But the First Order arrives and takes them captive, and Rucklin reveals the location of the Colossus. Yeager, Kaz, Tam, and CB-23 escape and contact the Colossus, warning them to leave, but Captain Doza and the others decide to fight. The Aces launch an attack on the Star Destroyer while the others defend the station, and Yeager, Kaz, Tam, and CB-23 manage to escape from the Destroyer just before it is destroyed. Back on the Colossus, the heroes celebrate being all together again.