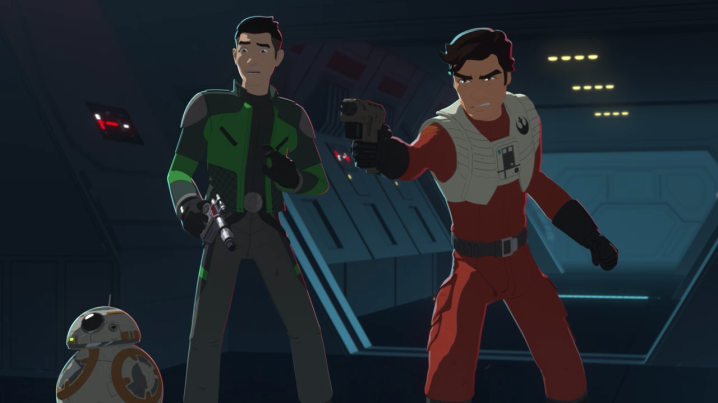 We are halfway through season one of Star Wars: Resistance, and I must say it has been pretty spectacular so far and has exceeded all expectations.  There will apparently be a midseason break coming up for the next month of so, but the final episode before it, “Station Theta Black,” may just have been the most enjoyable episode of the series so far.

There was no massive reveal or cliffhanger, but it was a very good episode.  Let’s jump in to our review!

Jarek Yeager lets Kazuda Xiono take the Fireball to meet up with Poe Dameron, which infuriates Tam Ryvora – who reveals to Yeager that she hasn’t finished fixing the ship yet.  In orbit, Kaz realizes that the ship isn’t in good shape, but Poe and the Resistance arrive just in time to save him, and promise to work on the ship.  While on board the Resistance ship, Poe takes Kaz to meet General Leia Organa, and Kaz gives the General the information that he had stolen from Captain Doza’s office in the previous episode, about what the First Order’s proposal was.  Using some information from Kaz, Leia’s team was able to pinpoint a possible First Order outpost.  Leia sends Poe to check it out, but makes it very clear that Poe is not to engage the enemy and that his mission is simply reconnoissance.  Poe takes Kaz with him, and they find a base built into an asteroid.  The droids – BB-8 and CB-23 – detect no life forms inside, so they land in the base.  Poe orders CB-23 to fly the X-Wings away and keep them hidden until needed.  Kaz continually questions Poe as to whether this is a good idea, but Poe brushes him off.  BB-8 plugs in to a terminal and they learn that the base is scheduled for demolition – meaning that the First Order likely wants to ensure their actions at the station aren’t discovered.

A First Order sentry droid then awakes and confronts Poe, Kaz, and BB-8, causing them to run before Poe fires a shot that destroys it.  He assures Kaz that no signal was sent, but at Starkiller Base Captain Phasma learns of intruders at Station Theta Black and informs Major Vonreg that the two of them will travel with the demolition team to deal with the intruders.  CB-23 detects the First Order’s arrival and informs BB-8, who then informs the others.  They decide to find the control station, and BB-8 plugs in and learns that the First Order used the facility for mining and processing dedlanite, which is what they use to make blasters.  They have farmed enough to, as Kaz says, make “a lot of blasters.”  After learning this information, they decide that it’s time to leave – but before they can get very far they encounter two stormtroopers and an explosive.  The stormtroopers order Poe and Kaz to drop their weapons, but Poe points his at the explosive as they slowly back away.  Some banter continues before Poe blasts the doors to the hallway, sealing he and Kaz off from the stormtroopers, and blasts the explosive.  The ensuing explosion alerts Captain Phasma to the location of the intruders.

Poe and BB-8 get separated from Kaz, but the latter figures out a way to get away from some troopers without using his blaster (which he clearly isn’t comfortable with), hiding from them and then sealing off the doors behind him.  Poe and BB-8, meanwhile, come face-to-face with Phasma and a few stormtroopers before taking off running another direction.  They eventually meet up with Kaz above the hangar, and Kaz operates a crane to destroy the walkway.  This sends Phasma and her troops falling, and Poe is saved by Kaz.  CB-23 arrives with the X-Wings, but Major Vonreg and First Order TIEs are waiting.  Poe and Kaz engage Vonreg and the TIEs in a dogfight by the station until Phasma orders Vonreg to retreat due to the explosion.  Poe and Kaz try to outrun the explosion, but Kaz realizes he’s not going to make it and hides in an asteroid.  Poe, however, frantically tries to search for Kaz and BB-8 and can’t find them, until he suddenly hears a response and discovers that Kaz had used an asteroid to shield his ship from the blast.

As they arrive back to the Resistance, Poe and Kaz inform Leia of what the First Order is doing: building weapons.  Unfortunately, Leia realizes that this won’t mean much, since many New Republic Senators actually profit from this, but assures Kaz that it’s people like him who make up the Resistance and make a difference.

This episode was quite exciting and significant, featuring plenty of spying and thrills and tension and excitement.  So far in the show, there hasn’t really been much direct conflict between the First Order and the Resistance.  At the very beginning of the first episode there was an engagement between New Republic fighters and First Order fighters (rescued by Poe Dameron’s arrival to the fight), and then there have been a couple of times where Kaz has come quite close to conflict with stormtroopers, but there hasn’t really been much direct conflict.  That’s very intentional, too, because they are currently in a cold war but are prohibited from open conflict and engagement against each other.  You can tell at times in this episode that there is a tension felt because of that order.  For example, Leia makes it very clear to Poe that he is not to engage the First Order, though Poe doesn’t seem to like that order too much and doesn’t end up following it.  But even when Poe and Kaz are staring down the two First Order stormtroopers with blasters, it seems that both sides are quite a bit more willing to stall and offer the other the chance to surrender – probably because they are aware of the current climate and regulations.

It was great to see both Poe Dameron and Captain Phasma in this episode having significant roles, too, and both of their characters were used really well (as always in this show).  It was also a nice touch to have them come face-to-face with one another briefly.  And I really liked that the First Order wasn’t just completely incompetent; sure, stormtroopers still have terrible aim, but the overall plan that Phasma and the First Order had was pretty good (with Vonreg and the ships waiting with support outside the station).  And even though the stormtroopers’ aim still sucks, Kaz’s was worse.  So this wasn’t an instance of the good guys being able to hit everything and the bad guys being able to hit nothing.  Really, the only one who could reliably hit anything was Poe, and that’s fair.

On the topic of Kaz, I actually found it interesting that in this episode he seemed to show more maturity.  Sure, he still makes a lot of loud noises when he’s in danger and that can get a bit old at times, but I think he’s definitely shown at least some signs of maturing in the first half of this season.  And in this episode, he actually is often the voice of reason instead of Poe.  Kaz keeps reminding Poe of what General Organa had said, but Poe kept brushing him off – eventually engaging the First Order in combat.  Poe ultimately didn’t have much choice when it came to fighting the stormtroopers, but he did have many choices leading up to that.  I think it’s interesting that Kaz is that voice of reason here, because there have been times where Kaz hasn’t exactly been the most reasonable or mature character.  So that was an interesting twist, but it also highlighted an important aspect about Poe’s character.  As seen in The Last Jedi in particular, Poe can be reckless.  He can make plans and follow them, but he’s going to do whatever he thinks is best.  But what Leia in TLJ truly wants him to realize is that leadership isn’t about looking out for what is best for you but what is best for others, too.  In this episode, Poe’s actions almost get Kaz killed – but since Kaz walks away, it probably isn’t as sticky of a reminder (that will come when Poe’s actions do get people killed in the Evacuation of D’Qar).

One of the true highlights of this episode is General Leia Organa, however, as any time we get a chance to see her it’s special.  We saw her briefly in the pilot, though she didn’t say anything.  This time, though, she gets two different scenes and plenty of dialogue (Carolyn Hennesy is now doing the voice in this show, though unfortunately I didn’t think she sounded all that much like Leia).  And in connection with that, we learn (from Leia) that there are New Republic senators who are getting rich because of the First Order making weapons.  That helps explain part of why the galaxy doesn’t take the threat of the First Order seriously; while some people likely genuinely believe the reports about the First Order are just exaggerated, there are others who seem to have far more nefarious means for downplaying the threat.  Kaz thanks Leia for the chance to belong to her Resistance, but then Leia responds, “Kaz, the Resistance doesn’t belong to me alone.  I help guide it, but everyone can play a part in it, just like you are now.”  Sounds like something her brother would say.

Overall, I loved this episode, and I found it to be the most enjoyable yet.  The spying aspects were great, there was tension throughout, the action sequences were well-done, the animation (as always) was beautiful, and getting the chance to see more of Poe, Phasma, and Leia is amazing – all while learning more about the First Order, the Resistance, and the New Republic.  It was a great episode, and it’s one that I’ll surely watch again.