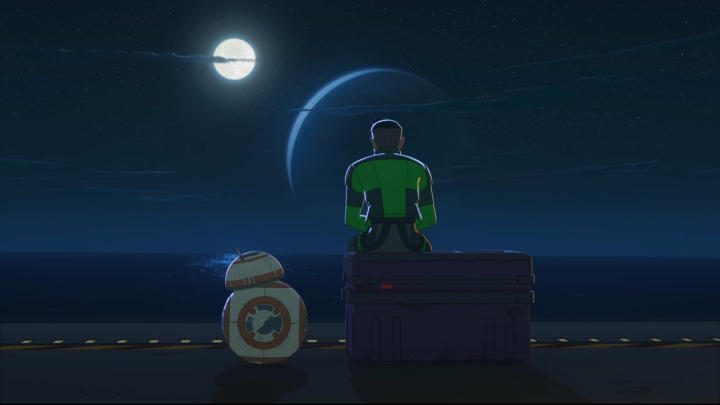 It was a terrific debut for the show, one that in my opinion rivals the premieres of the previous Star Wars animated series.  I loved the storyline, loved the introduction to the characters, and loved the animation.  All in all, I came away very impressed with the show and eager to see more.

Keep reading for my full review of the episode.  I’ll hopefully have these posted every Monday following the premiere (I know I’m a day late this week…), and as an additional note, for the time being I’m going to review weekly based on the TV schedule, even though the next several episodes are already available online. 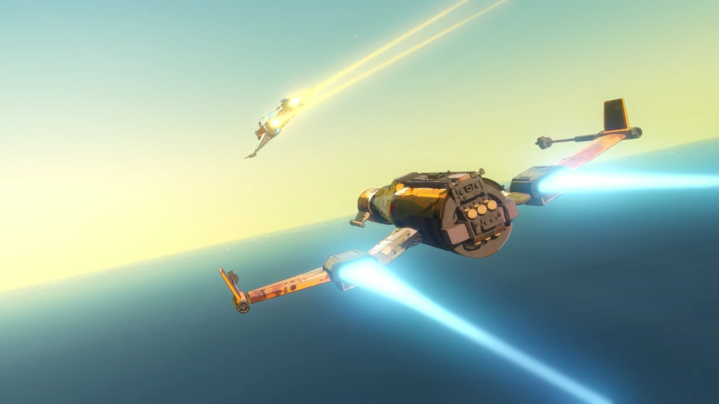 The episode begins with Kazuda Xiono and two other New Republic pilots carrying information for the Resistance, but being trailed by a red First Order TIE Interceptor, piloted by Major Vonreg.  Kaz tells the others to escape and stays behind, but his ship is disabled.  Before Vonreg can land the killing blow, however, Poe Dameron arrives.  Kaz comes up with an idea that disables the First Order fighter, which then escapes.  The maneuver impresses Poe, who brings Kaz upon a Resistance transport to offer him a spot in the Resistance.  Kaz is hesitant because of his father, a New Republic senator, but he soon joins and is given a mission by Poe: to travel to the Colossus and figure out who the First Order spy(s) is on the station.  Poe convinces an old friend, Jarek Yeager, to allow Kaz to stay with him and work as part of his crew.  Due to a misunderstanding, word spreads around the station that Kaz is actually the best pilot in the galaxy, which forces him into having to race to prove it.  Kaz chooses to race against Torra Doza – a young hotshot pilot who is the daughter of the station’s captain – while Yeager, Neeku, Tam Ryvora, and Bucket help Kaz repair their ship, the Fireball.  In the next day’s race, Kaz impresses all on the station with his flying skills, and though he doesn’t win, he does survive the explosion and crash.  Yeager tells Kaz that he can stay on the station, but that he doesn’t want to get caught up in the mission as a spy.  Meanwhile, Major Vonreg arrives at Starkiller Base and tells the First Order Star Destroyer to inform Captain Phasma of his arrival. 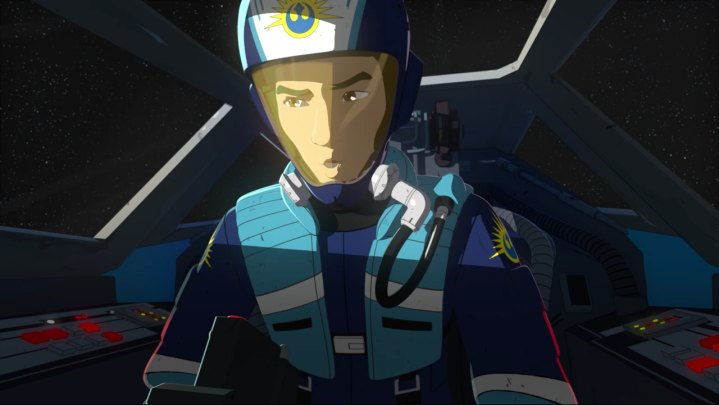 Like I said earlier, I thought this was a terrific introduction to the series and I enjoyed it far more than I thought I would (and I was excited about it in the first place).  In fact, I think this pilot rivals the pilots of The Clone Wars and Rebels (not that everything must be a competition), as it combined characters and settings that we’re already familiar with and added plenty of new elements and characters as well.

One of the biggest concerns that many had about the show before it aired was that it looked too childish.  That’s going to be the case with Star Wars, of course, but I didn’t at all find that this show overdid it.  Sure, there are elements of it that are obviously geared toward children – but that’s ok!  I thought it did a good job of incorporating all audiences, just like Star Wars has always been doing.  I though the humor was actually better and less forced than you’d expect for a “children’s show,” and I didn’t find it any more catered to children than The Clone Wars or Rebels were early on.  Remember, both shows grew as they went on.  So the Resistance start seems very much in line with those other two shows.

Furthermore, there are big looming questions that could help the show mature quickly.  At this point in the timeline, the galaxy is at peace – at least, relatively speaking.  The New Republic has been in existence for three decades, so that’s all Kaz has ever known.  Though the Resistance is in conflict with the First Order, it is very limited due to New Republic regulations.  But we know that the show will overlap with the events of The Force Awakens, which will lead to some much more difficult situations.  First of all, it will mean open warfare between the Resistance and the First Order.  But secondly, it will mean the destruction of Hosnian Prime – which is Kaz’s home.  And since his father is a New Republic Senator, it is quite possible that Kaz’s father, family, and friends will be killed by the First Order’s destruction of the New Republic capital.

Additionally, I found the animation great.  In particular, it looks great for the flying sequences (there’s a dogfight in X-Wings at the beginning, and then a race from the Colossus at the end), and the animation for the rest of the episode looks good as well.  It’s easy to get used to, in my opinion, and looks much better when you get to see the episode as a whole.

I also loved how much of Poe Dameron we got in this episode.  I know he won’t be a main character in every episode, but we got to see quite a bit of Poe in the first half of this episode, and it was great.  BB-8, too – and we even got a glimpse of Leia and heard C-3PO!  It’s too early to tell about the new characters, but I’m especially intrigued by Yeager and want to learn more about him and see more of him.  As for Kaz, I think he’s fine.  He seems to be just a newer version of Ezra Bridger, but I’m sure as the show gets going we’ll see differences between the two – namely, that Kaz isn’t a Jedi.

The thing I was most excited about with Star Wars: Resistance was the ability to tell more stories in this time period, which I’m really interested in exploring.  The first episode gave us hints of that, but it also established the characters and the series.  I’m really excited to see where the show decides to go, because there are a ton of storytelling options open for them.