The season finale of the first season of Star Wars Resistance aired on Sunday, and it provided a thrilling and satisfying conclusion to the season while providing plenty of intriguing options for season two!

Let’s jump in to the review! 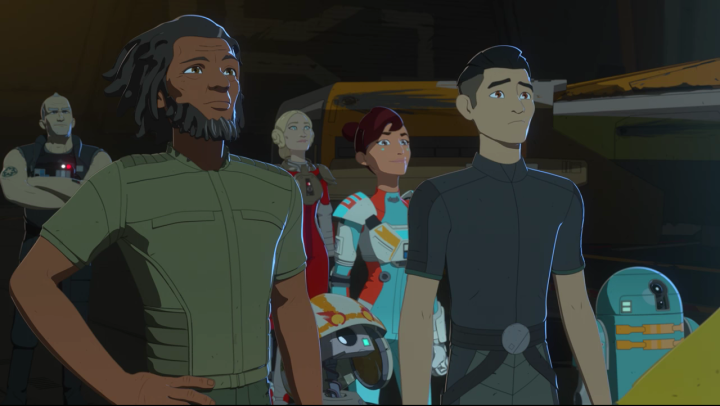 The episode picks up right where last week’s left off (since it is, of course, the continuation of the two-part finale), which briefly shows us again Kaz and Torra watching the destruction of Hosnian Prime.  Kaz is understandably distraught, but Torra reminds him as kindly as she can that they have to act now, when they have the chance.  Kaz resolves to stop the First Order no matter what, so they sneak on to the holding cells, where they free Yeager and Captain Doza.  Kaz tells Yeager about what happened and his mentor gets a chance to console him, but soon stormtroopers arrive.  They trick them and lure them into the cell, where Kaz and Torra surprise them and take their weapons, giving them to Yeager and Doza.  Neeku, meanwhile, comes up with a plan: in order to get the ship flying they’re going to need to flush the hallways, so they can flush the First Order troopers right out with it!  Kaz and Torra split up and lure stormtroopers into this trap, and Neeku sends the troopers out into the water – where they fall to the depths and/or are eaten by sea creatures.

Realizing what’s going on, Agent Tierny begins to take Tam to a ship to get her off-world.  Commander Pyre realizes that this is the right call, and they leave and call in reinforcements.  Overhearing this, Yeager contacts Kaz for help, as the two want to keep Tam from leaving.  Doza, meanwhile, prepares the station.  Outside, a First Order shuttle arrives and Tierny, Pyre, and Tam walk towards it.  Kaz and Torra arrive on the upper terrace, while Yeager arrives on a side platform.  Kaz explains to Tam who he really is, and Yeager pleads with her to trust them.  She is upset with the two of them for lying to her – particularly Yeager, whom she says was like a father to her.  Kaz, Torra, and Yeager are soon surrounded by stormtroopers, but on Kaz’s signal Neeku sends the Colossus flying.  This forces the First Order ships to temporarily break off and causes the troopers to momentarily lose their balance.  CB-23 takes out all four stormtroopers on the upper terrace and saves Torra in a series of pretty epic moves, while Yeager blasts stormtroopers as well.  The First Order prepares to leave, as Tierny and Pyre board the shuttle, and Tierny pleads with Tam to come with.  Yeager also pleads with Tam to stay, and after a long moment of consideration, Tam takes Tierny’s hand and goes with the First Order.

Yeager, realizing that Tam has made her choice, orders the pilots to get to their ships to defend the Colossus (while Doza frees the other Aces from their cells).  Upon arriving at the hangar, however, Kaz, Yeager, and Torra find TIE Fighters staring them down… until Aunt Z and Hype Fazon arrive and blast the fighters out of the air, having intercepted Kaz’s distress message.  At this the Aces jump into their ships, joined by Yeager, who leads them into combat against the First Order TIEs.  Yeager blasts several TIE Fighters, as do Kaz and Torra.  Soon, Synara San and the pirates arrive to aid the Colossus as well, fighting back against the First Order.  But the First Order forces won’t go away quietly, as Major Vonreg shows up to pursue the fighters and a Star Destroyer appears in orbit to begin firing on the Colossus.  Kaz and Yeager engage in a dogfight with Vonreg while Neeku prepares the Colossus to jump into hyperspace for D’Qar.  Using some fancy flying as Kaz flies into the station and maneuvers through it to surprise Vonreg, Kaz destroys the skilled First Order pilot – which prompts Yeager to note that Kaz sure is a great pilot.

Once the pilots are inside the station, Neeku sends it into hyperspace, while the heroes gather to watch the stars go by, having successfully liberated the station.  But Neeku explains that he didn’t exactly key in the coordinates to D’Qar and doesn’t really know where they’re going – but Kaz says that at least they’re going together… minus Tam. 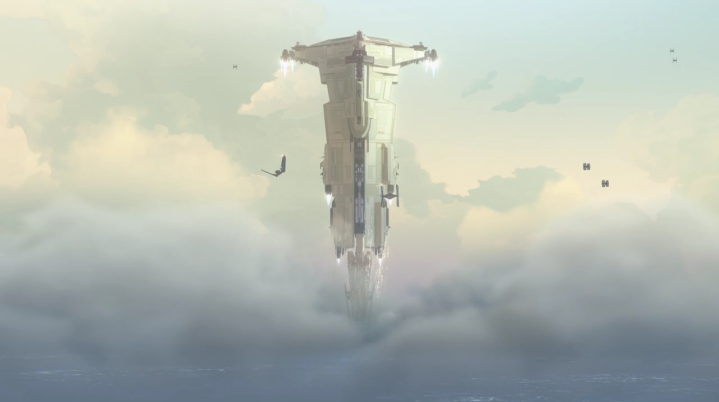 The first season of Resistance has been terrific, and this episode provided such a satisfying wrap-up to it – as well as an interesting tease as to what could come next.  The first part of this finale, which took place last week, largely dealt with the emotional impact of things, which culminated with Kaz witnessing the destruction of his homeworld while stormtroopers raised their fists in solidarity with the First Order’s actions.  This week’s episode largely dealt with the action sequences, which we knew were coming as the heroes fought to defend the Colossus.

I loved the opportunity to see these heroes working together to defend the station – Kaz, Torra, Yeager, Captain Doza, CB-23, Neeku, and more all played key parts.  It was cool seeing Neeku be the one who came up with the plan to get rid of the First Order, and it worked very well – they literally flushed the First Order out.  But I especially loved Yeager working closely with Kaz, because Yeager got a chance both to play a key emotional role for two characters but also because we got to see him flying in combat with the Aces – and he really shone.

As far as that combat goes, this show has always been tremendous at aerial sequences, and this episode is no different.  Yeager, Kaz, and the Aces take to the skies to defend the Colossus, which by this point is flying in mid-air and is continually rising into the atmosphere.  The pilots launch and begin to defend the station, and it’s immediately clear that Yeager joining them gives them an added level of credibility.  Yeager takes out more TIE Fighters than anyone, which fits with what we have learned this season – he’s the best pilot on the station.  But while the other Aces don’t do a whole lot on-screen, Kaz and Torra do get some moments to shine in the battle.  And speaking of Kaz, for any clumsiness or ineptitude that he has shown, he has always been proven to be a great pilot.  He was a part of the New Republic navy before joining the Resistance, and he has always excelled in this show when he’s in the cockpit of a ship.  So while it has been great to see him continue to grow and develop as a character outside of his ship, in this episode he once again gets a chance to fly.  And in doing so, he gets a chance to shine.  He’s obviously a skilled pilot, but it all climaxes when Kaz defeats Major Vonreg.  Coming into the episode I thought it would be Yeager to defeat Vonreg, but it turns out that it was Kaz saving Yeager.  Kaz brilliantly flies into the station, where Vonreg obviously can’t see him, and waits until just the right moment to fire and destroy the Red TIE Fighter.  It was a brilliant bit of flying (that reminded me of something Poe Dameron might do), and it prompted Yeager to exclaim, “Man that kid can fly.”  Indeed he can.

But obviously one of the biggest story beats of the episode, like it has been for the last few weeks, has been revolving around Tam.  Kaz and Yeager lied to her about Kaz’s identity, and though they didn’t do it maliciously or with ill intent, she feels hurt and betrayed – and Agent Tierny of the First Order treats her very well.  One of the key points in this episode was the standoff between the First Order and Kaz and Yeager, as the latter two desperately try to convince Tam to come with them and to not buy into the First Order’s lies.  This gets even more intense when Tierny and Yeager both plead with Tam for her to come with them, and this show does it so well by truly playing up the tension, to where viewers believe that Tam could go either way – will she choose to stay with her friends or go with the First Order whom she believes to be only trying to help?  In the end, she chooses to go with the First Order – and I think that’s the best decision for this show when it comes to storytelling potential.

I’m super excited for season two to premiere later this year, and I imagine that we will closely follow not only the exploits of Kaz, Yeager, and the others on the Colossus but also of Tam with the First Order.  This may give us a chance to see the First Order more from the inside (which would be great!), but it will also provide a much more personal and emotional tie to the fight for both sides.  I applaud the storytellers for taking this route: we have often seen people going from the bad side to the good side in Star Wars (like, for instance, in the recent Battlefront II story), but not often have seen the opposite.  There are so many things that can be done in season two with Tam and the First Order that it’s exciting to think about.  Additionally, it’s exciting to think about how the Colossus is now mobile, meaning that we’ll likely be exploring more of the galaxy in season two – which figures to be right in the middle of the First Order-Resistance war.  Remember, only this final episode technically takes place during an official war time; the rest takes place during a cold war in which conflict isn’t really allowed.  But in season two, we’ll be during a period of open warfare.  And our heroes are now getting away from Castilon and (presumably) joining the larger Resistance.

I can’t wait to see what direction this show takes in season two, but this much is clear: season one was fantastic.  I think it’s easily the strongest first season of any of the three main Star Wars animated shows, and I’m excited to see where it goes from here.