It’s crazy to believe, but Star Wars Resistance has concluded its run!

It had just two seasons and seems to have been not much more than a filler in-between higher-priority animated projects, but in the meantime it managed to create really compelling characters and tell an entertaining story. It has been continually underrated in its run, and now that it’s over, I think we can say that they saved their best for last these last few weeks.

This was an absolutely fantastic episode! Let’s dive in to our review.

Aboard their Star Destroyer, Tam Ryvora and Jace Rucklin watch as other First Order destroyers arrive and join them in wiping out the Aeosians with an orbital bombardment. Rucklin is thrilled, but Tam is horrified by the First Order killing innocents. She finally resolves to act, and she infiltrates Agent Tierny’s office with the help of a mouse droid, stealing her comlink and sending a distress signal to the Colossus. Meanwhile, Supreme Leader Kylo Ren contacts Commander Pyre and Agent Tierny, using the Force to threaten them if they prove unable to subdue the Colossus.

Back on the Colossus, Kaz, Neeku, and Yeager work on the Fireball just like old times, reminiscing and missing Tam. Suddenly Kaz’s comlink goes off, and Neeku deciphers the code as being a secret one he and Tam had created, and that this particular one was to be used in case of emergency and said to meet on Castilon. Kaz puts it together that Tam wants to leave the First Order, so he and Yeager take a First Order transport to the planet. That way, if it’s a trap, the Colossus will still be safe.

Tam, now a squadron leader, readies to escape, but Tierny seems suspicious of her and sends Rucklin with her. Tam and Rucklin take one TIE, while two others accompany them on a ‘training exercise’; upon realizing they’re heading to Castilon, however, Commander Pyre and Agent Tierny order the Star Destroyer to follow. Kaz and Yeager are waiting on the planet, but they see three TIEs rather than one. Tam takes out the other two TIEs and reunites with her family. They take an unconscious Rucklin onto their transport and ready to leave when the First Order Destroyer shows up and begins firing on the planet. Before the heroes can jump to hyperspace, they’re caught in the tractor beam and brought aboard the Destroyer.

Tam and Rucklin are taken captive, but in an attempt to prove himself innocent Rucklin reveals the location of the Colossus. Yeager, Kaz, and CB-23 sneak off of the transport after rigging it to self-destruct, allowing them to escape further into the Star Destroyer. They rescue Tam, and together they decide to alert the Colossus that the First Order is on its way.

The Colossus, meanwhile, hasn’t heard from the others yet, so Captain Doza decides they need to act and rescue their friends. But he can’t put the others on the station, so he calls a meeting with all the residents of the station to ask them what they want to do. He explains the situation, but the others don’t want to fight and want to instead flee. It is then that Neeku receives the transmission from Kaz from inside the Star Destroyer, warning the Colossus to flee. Tam appears on the transmission and apologizes, echoing Kaz’s plea that the Colossus save themselves. This moves the residents to fight in order to save their friends.

After sending the transmission, Yeager, Kaz, and Tam are taken captive and brought to the bridge, where they watch as the Colossus comes into view, which horrifies the heroes as they realize their friends haven’t fled. But the Aces spring into action, under the command of Venisa Doza, and head right for the Star Destroyer’s engines. They don’t have much success against the shields… until CB-23 deactivates the Destroyer’s shields from inside the ship. Seizing this advantage, the Aces make another run, this time successfully. Yeager also takes advantage of this, and he leads Kaz and Tam to free themselves on the bridge. They escape, heading for the transports, where Pyre is loading stormtroopers to invade the Colossus.

With the Aces dealing massive damage to the Star Destroyer, the residents on the Colossus fight back against the stormtroopers boarding the station. On the Destroyer, Yeager, Kaz, Tam, and CB-23 fight the First Order. Just when it looks like Kaz is going to be killed by Pyre, CB saves him, but is badly injured. The heroes make it on a transport and flee, just as Supreme Leader Ren contacts Tierny and kill her and as the Star Destroyer is blown up by the Aces.

Back on the Colossus, Tam is welcomed home, and she joins her family for a drink at Aunt Z’s – not just Team Fireball, but Team Colossus. 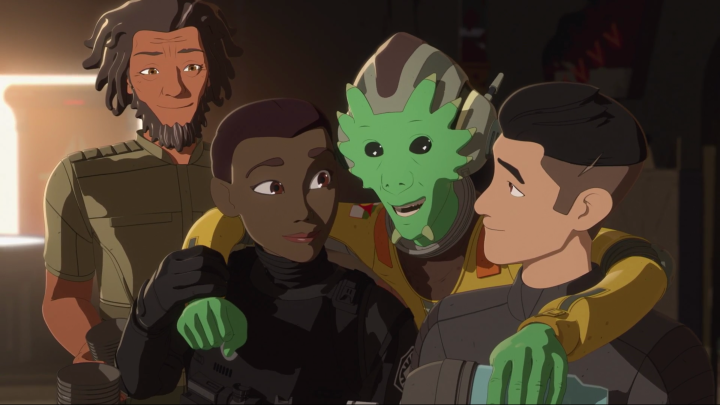 This was such a great ending to the show; it was emotional, thrilling, nerve-racking, and satisfying. Though this show had only a short two-season run, it created memorable and lovable characters, and brought their stories to a conclusion in a very satisfying way. And at its heart, it remembered that this show has always been about family. What would you do for family? That’s the heart of this episode.

All season they’ve been setting up in small ways that Tam is discontent and disillusioned by the First Order, and this episode provided the tipping point: when innocent people were killed by the First Order. It didn’t make it any better that this made Rucklin happy; Tam has been realizing that the First Order isn’t what she was looking for, and this is just the event that tips the scales causing her to act. When she’s brought before Tierny later as a prisoner with Yeager and Kaz, Tierny asks where she went wrong, as she had given Tam the chance to be a pilot she always wanted as opposed to Yeager – and Tam responds that Yeager gave her a family. At its heart, this episode was about Kaz and Yeager being willing to put themselves in danger in order to rescue Tam. And it was about Tam being willing to do whatever it took to return to her family.

[As a side note, based on what they said in this episode about Tam and the Fireball, I like to think that she might have been flying it during the Battle of Exegol; Kaz can fly an X-wing, so Tam deserves the Fireball. I think it’d be really cool if she got to fly that ship she always wanted to.]

But it was also about the larger family of the Colossus finally deciding to fight. Even though the station has been pursued by the First Order all season, and even though its leadership has joined the Resistance, that doesn’t mean the people have. And even in this episode, they don’t want to at first… until they’re convinced by seeing Tam again. They can’t give up on their friends. And this causes them to, finally, stand up and fight the First Order. And this is a theme that has been developed across the sequel trilogy as well; the way the Resistance wins is by getting the galaxy to rise up and defend themselves. In The Rise of Skywalker, the decisive turning point is provided by “just people”; and at the end we see that people have risen up to fight on Endor, Bespin, and Jakku, as well as all across the galaxy. So too did the residents of the Colossus rise up to defend themselves, owning the fight and making it personal; they’re not just fighting against an evil regime, they’re fighting for those they love. Rose Tico was right.

I was anxious all episode because I thought that something probably would happen to Yeager, and that he wouldn’t get the happy ending, but I’m happy I was wrong. Because this is a show about family, it was nice to see that the family was together again. It’s a powerful message about how it’s never too late to make the right choice, and of course about the power of family that goes beyond bloodlines.

It was also great to see Kylo Ren show up, and it was quite dark when he did. He pulled a trick from Darth Vader’s book in threatening Pyre and Tierny by using the Force to cause them to draw their blasters and face one another, and in the end it seems Ren did kill Tierny for her failure – right before the Star Destroyer exploded. It seemed to me that Ren was less concerned with the Colossus being captured than he was with ensuring that his leaders weren’t failures, and this makes sense considering his character. But I didn’t think these villains went out in a lame manner, unless you consider Pyre being bested by CB-23 lame – but if you’ve watched this series, you’d know that CB-23 is more than capable of saving the day like she did here.

This episode provided moments for Yeager, Kaz, Tam, and CB-23 to shine, and without any of them they probably wouldn’t have survived. It was a brilliant episode that was such a fitting conclusion to a show that, though not widely received, has been really impressive.