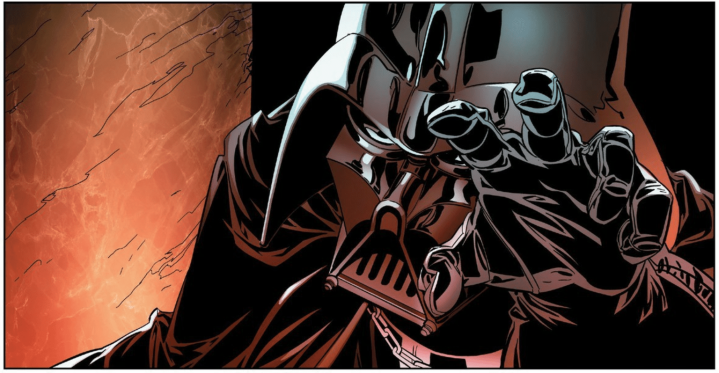 The latest issue of Darth Vader: Dark Lord of the Sith was recently released, and in it the Sith Lord was gifted a very familiar ship.

This was the second issue of the “Fortress Vader” storyline, which will see Vader getting his fortress on Mustafar that was seen in Rogue One.  The series has been terrific so far, and it will certainly be exciting to see more of his castle in the upcoming issues.  But first, there’s some problems with his Inquisitors that Vader must address.

The story in this issue picks up right where Fortress Vader: Part I left off, as Vader has discovered that two of his Inquisitors have shown weakness, and they have fallen in love.  Vader begins to fight them and the two Inquisitors see it as a chance to finally kill the Sith Lord, which results in a fight amongst the Coruscant skies.  Vader eventually bests them and, in a moment of horror, uses the Force to make them kill each other.  The issue ends with Vader meeting with Palpatine, who gifts Vader a very familiar ship.  At the end, Vader requests to have a world of his own, and Palpatine is willing to grant him it.  Palpatine suggests either Naboo or Tatooine, but Vader’s requested world is, instead, Mustafar.

It will be exciting in future issues to see the origins of Vader’s castle on Mustafar, but we aren’t quite there yet in this issue – though Vader has now requested that the planet be his world.  But while the castle isn’t revealed quite yet, there is another significant reveal: the ship that Palpatine gifts Vader has been seen before. 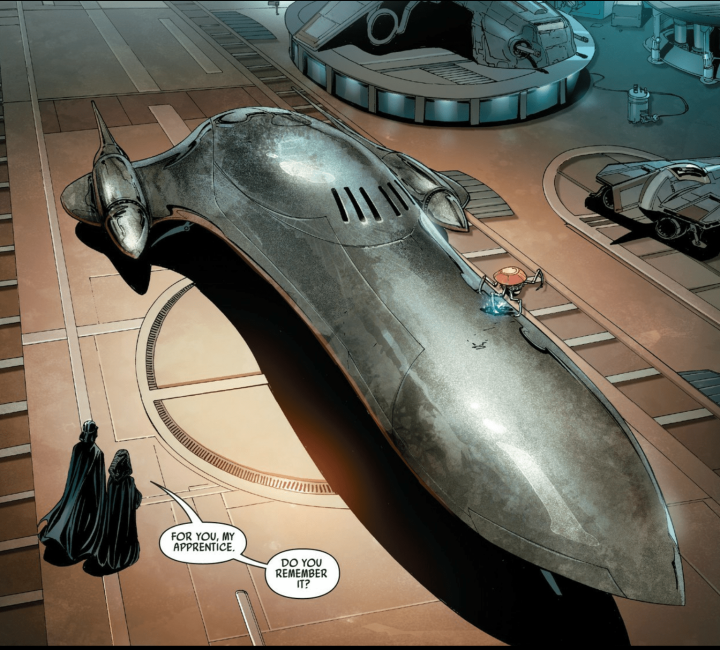 As Star Wars fans will remember, the ship belonged to Padme Amidala, as it was her Nubian-class royal starship that appeared in The Phantom Menace.  It was the ship that Anakin Skywalker left Tatooine on with Padme Amidala, not knowing that she was the queen of Naboo.  A decade later, the two of them would rekindle their relationship and fall in love, secretly marrying during a private ceremony on scenic Naboo.  After three years of marriage, Padme conceived children, and Anakin feared that she would die in childbirth.  So he turned to the dark side in order to save Padme’s life, but – at least as far as Vader knows – he had killed Padme in his anger on Mustafar.

So this is really a cruel gift from Palpatine to his apprentice, and based on Palpatine’s actions he seems to know it.  Vader acknowledges that he remembers the ship, but he is quiet.  He destroys the droid working on it, preferring to keep it from being touched up, however.  It is after this ‘gift’ that Vader requests a world – Mustafar – from his master.

As far as we know, this ship is nothing more than an easter egg given to Vader from Palpatine, but we’ll have to wait and see whether it shows up again in this comic series.  Either way, it’s a cruel gift from Palpatine that surely brings memories flooding back to Vader, who is trying to deal with his newfound life as the Dark Lord of the Sith.