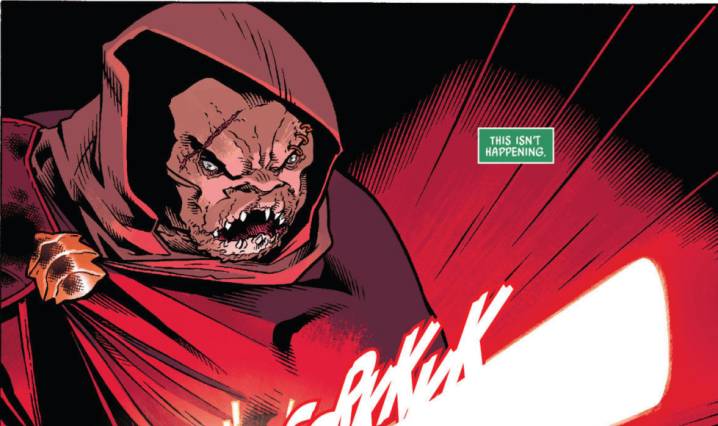 I’m a bit behind on this, but as the second wave of books from the High Republic era were released last month, so too was the seventh issue of Cavan Scott’s The High Republic comic series!

As the Jedi get ready to take on the Drengir at its root, Keeve Trennis must face an equally challenging opponent: herself. She must face her fears, especially if her friends are to be saved. And along the way, this issue also introduces the very first Sith Lord from this era… kinda!

Let’s dive in to the review!

Keeve Trennis is all alone on a mysterious world, not sure where she is or where everybody else is. She then meets Kanrii, then Bartol, then Julus, trying to figure out why and how they are all here – especially Julus, who was killed by the Drengir. Then a strange Jedi in white appears, and suddenly they all disappear again. They’re replaced by Darth Krall, who says that the others never were there, but he is. His red lightsaber blade meet’s Keeve’s blade and they duel, with Krall saying that the harvest will be theirs. He stabs Keeve in the chest, and as he’s surrounded by Drengir he shouts that the circle is complete.

In the meditation chamber aboard the Starlight Beacon, it’s revealed that it has all been a vision. She’s aboard the Beacon and being monitored by the doctors, who detected her vital signs jumping off the charts. She insists that she’s fine, all the while still being haunted by glimpses of the Drengir, knowing that it’s the result of her actions in tapping into the Drengir in the previous issue to find the location of the Great Progenitor. She heads to see Maru, who is busy communicating with Avar Kriss, who demands more Jedi for their attack on the Drengir homeworld. Maru notes that the other Jedi are busy, however, especially with preparations for the Republic Fair ongoing.

Keeve wants to help, insisting that she can make a difference, but Maru asks her if she really believes that. He gives her a mission to the Rseik Sector, where a group of workers has called for help due to a Nihil attack. The Nihil approach the workers, who are guarding the factory, and want the sprayer droids, ready to kill the workers to get them. But at the last moment Keeve shows up, holding back the Nihil to allow the workers to escape. But Keeve is distracted and gets hit, and as the Nihil storm charges her, she has a vision again of it being Darth Krall instead. Keeve is saved by the arrival of Orla Jareni, the white Jedi from Keeve’s vision, who takes the Nihil captive. Orla says that she came for Keeve, because she saw a Jedi “in danger of losing herself.” Keeve then lets her emotions flow, saying that she can’t help the others, as she would’ve gotten them killed or worse. She says that she thought she could handle the darkness that she sees everywhere, including in herself, but was wrong.

Their conversation is interrupted by Keeve saying that the Drengir root-mind just spoke to her, saying that it’s over and that they’ve already lost. As she says this, we see Avar Kriss’s skeleton overrun with Drengir.

This issue centers on Keeve Trennis, which is certainly fine with me, as she might be my favorite character from this entire era so far. In the previous issue, Keeve heroically found the location of the Great Progenitor, the root of the Drengir that controls it’s root-mind, and that set the Jedi on a course for the remote world of Mulita. But we would have expected Keeve to go along on the journey… but instead find that she’s dealing with the effects of her actions. Turns out entering the Drengir’s root-mind can have some damaging consequences, and Keeve is haunted by this. So while the Jedi are off trying to win the battle against the Drengir, Keeve is stuck on the Starlight Beacon, trying to figure out who she is.

And it all leads her to a vision through the Force, which brings together people we’ve seen in other issues to talk with her. But the most notable appearance is by someone we haven’t seen before: Darth Krall. We have heard of him before, however, as he was mentioned in Cavan Scott’s Dooku: Jedi Lost. He was a former Jedi known as Radacki who grew disillusioned with the Order and left, joining the Sith and becoming Darth Krall. He was mentioned in that story in connection to the Nightmare Conjunction, which was name-dropped in the previous issue as being connected to the Drengir as well. It seems that Krall was connected to the Drengir being trapped all those years ago, though we’ve heard nothing specific about that. And here he shows up fighting against Keeve Trennis in her vision, saying “the harvest shall be ours,” seemingly a mouthpiece for the Drengir.

With Krall’s appearance, it marks the first time a Sith Lord has shown up in the High Republic era, even if it’s just through a vision. We know that this is a period in which the Sith lie dormant, behind the scenes, in the shadows, so we’re certainly not going to be hearing much about them during this period – because to do so would contradict what the prequel trilogy told us about the return of the Sith. They weren’t active here, and they were thought to be extinct. But I do appreciate how they are still managing to pull in the Sith to the story given these constraints, and we’ve learned more about the history of the Sith through their past with the Drengir. They aligned themselves with the Drengir long ago, but they then turned on the Drengir and imprisoned them in self-preservation. It seems that this all probably happened at the time of Darth Krall and the Nightmare Conjunction as well, and I hope that we learn more about this history here. Though we might not get stories in the “present” era with the Sith, we can certainly continue to get history and backstory!

But at the heart, this issue was about Keeve. It’s about her dealing with a lack of confidence and plenty of fear and doubt. She thinks that she has failed, that she wasn’t strong enough to face the darkness, and that her being with her friends would only lead to their destruction. She doesn’t feel worthy of being a Jedi Knight, and it’s Orla Jareni who shows up at just the right time – not so much even to save the people under Nihil attack but to save Keeve Trennis. Orla says that Keeve belongs with the Jedi on the front, but instead has found her running the other direction. It is this conversation that allows Keeve to openly process her feelings of failure, since she doesn’t think she was strong enough to face the darkness. Orla does provide some words of encouragement, but it’s all cut short by Keeve’s connection to the root-mind, which haunts her again by showing her a vision of Avar Kriss’s skeleton, overrun by the Drengir, sending the message that they’ve already lost.

We know, of course, that this isn’t the end for Avar, so this cliffhanger doesn’t quite have that up in the air, but it is nonetheless a visually stunning way to end this issue. We know that Avar is in trouble, and it seems that Keeve is going to try to go to the rescue. And maybe Orla provided just the encouragement and sounding board needed to get Keeve back in the fight, giving her confidence that she can continue to stand for the light. The fight against darkness isn’t over – it’s never over – but she can continue to stand for light and life, as a true Jedi does.