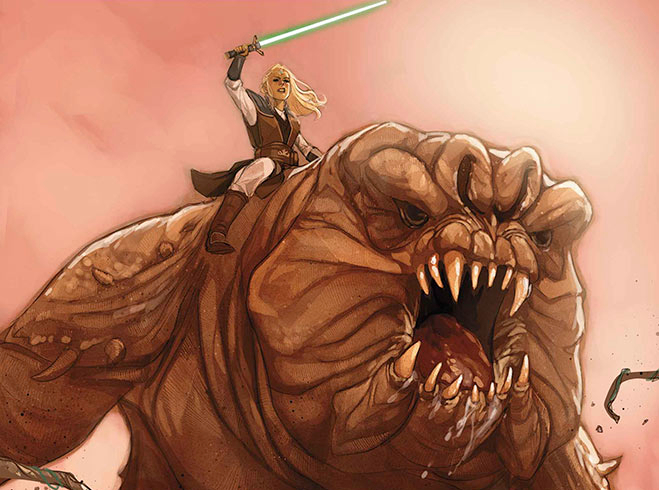 Drawn by Phil Noto, the cover shows Jedi Master Avar Kriss riding a Rancor, the creature first seen in Jabba’s Palace in Return of the Jedi.

The issue still doesn’t have a release date, but given the current pace of one issue a month it will presumably release early-to-mid June. The series is written by Cavan Scott and has focused on Keeve Trennis, Sskeer, Avar Kriss, and other Jedi. According to the StarWars.com release, the sixth issue sounds pretty interesting:

In The High Republic #6, the Jedi will clash with Hutt forces — meaning Gamorreans, Nikto, and battle rancors — while Starlight Beacon is over-run by a creeping alien horror. Plus, Keeve Trennis finally uncovers Master Sskeer’s terrible secret…

It obviously is intriguing that the Jedi will fight against Hutt forces, and that will be something familiar-looking to Star Wars fans! Plus, there’s something going on with the Starlight Beacon, which also is intriguing. But to me, the most exciting and interesting part of that release is that it looks like we’ll finally learn what’s up with Sskeer. He’s been dealing with the dark side so far in this series, but we were told before the era even started that he had a dark secret that was threatening to tear him apart. But we know some of the factors that seem to be leading to his breakdown, and it’s not secret… so there’s obviously something more. I’m really curious to find out what that is.

Anyway, without further ado, here’s the image of Kriss riding the Rancor:

It looks really cool, and this series has been great so far! I can’t wait to experience this issue in a few months!