In the first issue, written by Charles Soule and drawn by Jesús Saiz, we see the immediate aftermath of the events on Cloud City, as the Millennium Falcon regroups with the Rebel Alliance… right in the midst of a huge battle!

In the mid-rim, at Rendezvous Point Delta-Three, a Rebel cell is under attack from the
Empire, whose forces are under the command of Commander Zahra aboard the Star Destroyer Tarkin’s Will. Under Zahra’s watch, the Rebels seem to stand little chance. Kes Dameron can’t help but watch from one of the Rebel transports, hoping that his wife, Shara Bey, survives the fight in her A-Wing. Things are looking bleak when a ship arrives, with a Rebel transponder signal, and the fleet soon realizes that it’s not just a random ship – it’s the Millennium Falcon!

Leia Organa and Chewbacca pilot the ship into the fray, contacting the other Rebels to devise a plan. The plan requires the Falcon to create a hole for the others to escape. Reluctantly, Lando Calrissian takes the controls of the ship to fly with Chewie, as Leia heads for the guns. Luke Skywalker, shaken and still missing a hand, volunteers to help on the guns as well. As Luke grows more and more frustrated and despondent, unable to get the memory of what happened on Cloud City out of his head, he screams out in anger and uses the Force to reach out and turn the tide. As Leia watches, she remarks that it looks like all the TIEs just lost their pilots at the same time, and Lando tells her to shoot them down. Luke can’t believe what he’s done.

Meanwhile, Lando and Chewie fly the Falcon right toward a Star Destroyer, making their attack run and creating a hole for the remaining Rebel ships to jump to safety, which they do. Once they escape to safety, they come to the haunting realization that, should they contact any other Rebel cell, the Empire could pinpoint the location of both cells. They are, essentially, on their own.

As the first issue ends, Luke reaches out to Yoda, but to no avail. He’s lost and desperate, and he confides in R2-D2 that he’s no longer sure if he should be a Jedi. He’s struggling with his identity, with betrayal, with shock, and with an uncertain future. 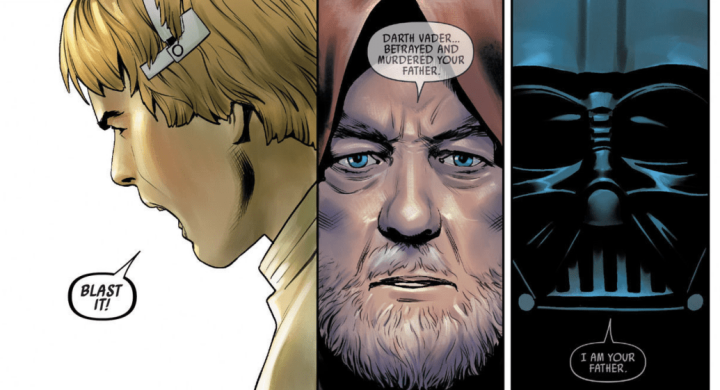 I never really expected there to be much of a story about how the Falcon re-grouped with the rest of the Alliance, but I think it works here. It makes sense, upon thinking about it now, that the Falcon wouldn’t be the only point of interest for the Empire in the wake of the Battle of Hoth. After the evacuation on Hoth to conclude the first act of The Empire Strikes Back, we leave the larger Rebellion for the rest of the film (until the very, very end) and focus just on the Falcon and on Luke. But when you stop to think about it, though Darth Vader is rightly predominantly concerned with the Falcon, the Empire surely would devote plenty of resources to tracking down the other ships and cells too. So it does make sense.

So anyway, as the Falcon regroups with the Alliance, they arrive right in the midst of a battle. It’s the first step toward Lando proving himself to the others, as he’s a reluctant hero who helps to save the day. He of course tries to milk that for all its worth afterward, but the Alliance – and especially Leia – still doesn’t trust him, saying he’s a question. I’m pretty interested in seeing how Lando goes from being a rightly untrusted question to a General in the Rebellion by the time of Return of the Jedi.

But I’m sure what will be most interesting of all in this comic series is Luke Skywalker. I mean, sometimes we’re just so familiar with that big twist in Empire that we don’t really stop and think about the devastating effect it had to have had on Luke, one that wouldn’t be resolved overnight. This issue really shows him struggling with it, and included in that is him using the Force to take over the TIEs, leading to their destruction. It’s a huge display of power that confuses and surprises Leia and Lando, and it looks like Luke is both surprised and horrified.