With The Rise of Skywalker coming THIS WEEK, I thought it might be helpful to give a brief rundown on what we know of the new characters in the film – similar to what we did in looking at the new planets.

So here’s your primer of what to know about the newcomers before you see the film. 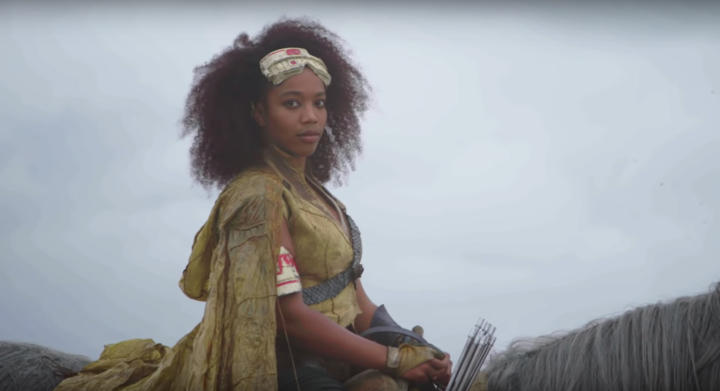 Not a whole lot is known about Jannah, but it seems that she works together with Finn in the film. Most notably, she is seen leading the charge with Finn as the Resistance rides Orbaks in their attack on the Star Destroyer. She is also seen briefly in the background when Finn runs atop the Death Star wreckage yelling for Rey, and that’s particularly interesting because it seems that Jannah is actually from Kef Bir. That’s the planet where the Death Star remains apparently are, so it’s likely that the heroes meet Jannah there.

We know a bit more about Zorii, as we know that she hangs around in the Thieves’ Quarter on the snowy planet Kijimi. She apparently has “a checkered past” and “some questionable morals”, according to actress Keri Russell, and she isn’t in the fight between the Resistance or the First Order either way; she has remained neutral. Perhaps most interestingly, she has a history with Poe Dameron that was even hinted at possibly being a romantic history. We haven’t seen much of her in material released so far, but we do know that she is with Poe, Rey, Finn, and the droids on Kijimi as C-3PO takes one last look at his friends before what I’m assuming is a memory wipe.

Rounding out the big three newcomers is Allegiant General Pryde, and that’s about all we know about him. He obviously is a General in the First Order who presumably works with General Hux and Supreme Leader Kylo Ren, but we haven’t seen him in any of the trailers or TV spots, and we know very little about him. Besides his name, maybe hte most interesting tidbit we know is that actor Richard E. Grant used Grand Moff Tarkin as an inspiration for his performance as Pryde.

Pryde is played by Star Wars newcomer Richard E. Grant. The above image is from Vanity Fair’s May preview of the film.

It wouldn’t be a Star Wars film without a new droid to get attention, and this time it’s D-O. He’s a friend of BB-8’s in the film, and he is seen with BB-8 watching as C-3PO takes one last look at his friends. Babu Frik apparently created D-O out of spare parts.

These new troopers were among the first aspects of the film revealed, as they wear slightly different armor that is red. Their name, obviously, harkens back to the ancient dark side Force users, and in some way the Sith Troopers apparently draw inspiration from the Sith. It seems they are loyal to Supreme Leader Kylo Ren, but they still remain rather mysterious as to where their utter loyalties lie. We have seen them in TV spots being deployed onto the hull of the Star Destroyer in an attempt to repel the attack led by Finn and Jannah.