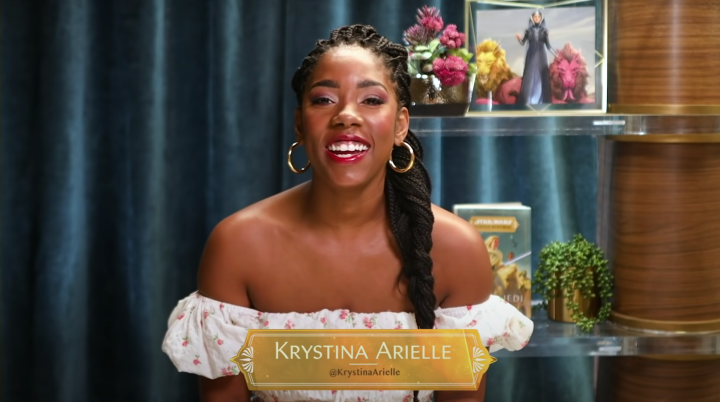 Star Wars has a problem. And no, it’s not what you think.

Over the weekend, Krystina Arielle shared some of her experiences online after being the target of racist and misogynist comments:

Arielle is the host of the new Star Wars internet series The High Republic show, which will celebrate the new era of Star Wars storytelling with interviews, exclusives, and much more. It’s nothing but exciting. Yet to some people, it’s maddening. And that’s problematic.

But it’s honestly part of a larger problem, and that’s because this isn’t the first time that something like this has happened. It’s sadly prevalent in most corners of the internet nowadays, and it’s present in most established fanbases, but it seems to happen far more frequently with Star Wars. Think about the history of just a few of these examples. Jake Lloyd, the ten-year old kid who played Anakin Skywalker in The Phantom Menace, was bullied. Ahmed Best, who brought Jar-Jar Binks to life in a massive cinematic advance, got such hate from fans that he considered committing suicide. Kelly Marie Tran, whose passion and excitement was obvious in her portrayal of Rose Tico, was harassed such that she left social media altogether – a decision previously made by fellow Star Wars actress Daisy Ridley. In a powerful op-ed for The New York Times, Tran wrote:

“It wasn’t their words, it’s that I started to believe them. Their words seemed to confirm what growing up as a woman and a person of color already taught me: that I belonged in margins and spaces, valid only as a minor character in their lives and stories.”

Sadly, it has been a segment of Star Wars “fans” who is largely responsible for perpetrating this amongst the actors, actresses, and filmmakers who work so hard to bring new stories to a galaxy far, far away. And though this hate-filled vitriol is by far the worst element of it, it’s not the only part of it. Instead, it’s a culture of entitlement and selfishness amongst certain fans that drive them to attack the creators of these films, whether that be George Lucas or Kathleen Kennedy or Rian Johnson or whoever. There’s a segment of fans out there that simply doesn’t know how to disagree with something without making it personal.

But, again, that’s not the worst of it. The worst of it was exposed yet again with Krystina Arielle’s experience, that there are so-called “fans” driven more by toxic hate than by love. Let me be clear: there is absolutely no room for this kind of discrimination and hate anywhere in the Star Wars community. There’s no room for racism or misogyny. Those who perpetrate those ideals not only fail on a basic level of human love, but also reveal that they fundamentally misunderstand the franchise they pretend to love. Sure, they may love the fight sequences and think them cool, but there’s much more to films than exciting scenes. The story of Star Wars teaches us some important lessons.

Hatred leads to suffering. That’s the path to the dark side. And the dark side, well, they’re the bad guys (shocker!). They’re not exactly worth emulating. But perhaps no one in the entire franchise has put it better than Rose Tico in The Last Jedi, when she said: “That’s how we’re gonna win. Not fighting what we hate, saving what we love.”

Don’t get me wrong, the vast majority of Star Wars fans I’ve encountered are wonderful. Hate has not won out in this fandom, nor will it. But while well-known youtubers who pretended to care about bullying a few weeks ago stay silent as actual bullying goes on, we must recognize the need to call out racism and hatred when we see it. And all the while, we must resist that pull to the dark side, no matter what.

We should emulate Rey in The Rise of Skywalker, when she said, “All you want is for me to hate, but I won’t.”

Maybe, it turns out, Star Wars fans have a lot to learn from the franchise they love.