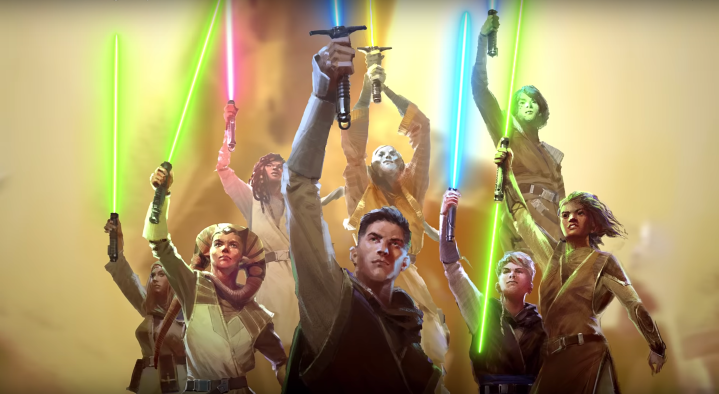 Yesterday, we finally found out what Project Luminous was all about, as it was announced that a massive publishing initiative will begin this August exploring the High Republic era of Star Wars.

There was a lot of information released, and a cool video was published by Star Wars explaining a lot of this, which you can check out here:

But here’s what we learned from the announcement of Star Wars: The High Republic!

1. This era will explore the High Republic

We had heard reports that Project Luminous would be set in the High Republic era, and it’s now confirmed. This era is set 200 years before the Star Wars prequel trilogy, meaning that things look quite different from what we’re familiar with.

This period of time was described as a golden age of the Republic, where there is peace and calm in the galaxy and where the Jedi are truly the guardians of peace and justice in the galaxy, like old Ben Kenobi said all the way back in 1977. Those working on this project wondered, “what does that look like?” And so Lucasfilm gathered them together, giving them a blank slate to work with, and asking them what stories they’d like to tell.

All of this gives the creators a ton of freedom to tell stories in a brand new time period with brand new characters (although Yoda would certainly be alive in this period and thus could possibly show up). It is going to allow Star Wars to branch out of the Skywalker saga and explore brand new territory. And that’s really important and good. According to Pablo Hidalgo, “The threat and the tension really comes from the Republic’s borders, because the Republic does not extend from one side of the galaxy to the other.” So this is a time where the Republic’s borders aren’t exactly the same as the ones we’re used to in the prequel trilogy, which means that the Jedi will be out on the frontiers of wild space.

We also can fill in a few details from what little was revealed about the High Republic previously: namely that this was a time of expansion for the galaxy.

3. The Jedi Knights of the Round Table

This period sees the Jedi at their height. James Haugh, VP for Franchise Content & Strategy for Lucasfilm, said that, “The description that we’ve used for the Jedi of this era is that they are the Jedi Knights of the Round Table.”

The Knights of the Round Table of course features prominently in Arthurian legends, and it’s cool to picture the Jedi in this kind of setting, hundreds of years before their demise, during a time in which the galaxy is at peace with the Jedi as its guardians.

Part of this includes the Jedi being out on the edges of the Republic. Haugh said that, “It’s a bit of a Wild West, new frontier. We see a different kind of Jedi, that patrols the frontiers, that is more of a Texas ranger.”

So there’s a mix of Arthurian influence with the old Westerns influence, which seems to me to be a really cool concept that I can’t wait to see explored. And though it seems that the Jedi take center stage in these stories, don’t worry: Haugh said that they will also introduce new smugglers, new scoundrels, and new bounty hunters as well.

While the story starts with the Jedi at their height, guarding a time of peace, that’s not what drove the creators in coming up with the stories of this era. As Haugh explained it, “The eureka moment was the question, ‘what scares the Jedi?’ And that made us all go, ‘ooh, something wicked this way comes.'”

That’s a fascinating question, because of course the Jedi are not supposed to give in to fear, so this likely will allow us to learn more about the ways of the Jedi. But from a story perspective, this is fascinating: probably all most of these Jedi have known is peace and prosperity in the galaxy, so something happening that disrupts that would rock their worlds and scare them. I think this is a brilliant starting place for creating these stories, because dropping something startling in this golden age can make for some fascinating stories to tell.

So what is that thing that scares the Jedi? Well, it seems that it all centers around what is being called The Great Disaster – and this is actually where the story of the High Republic era begins. “Our story begins with what we’re calling the Great Disaster,” Haugh explained. “It wouldn’t be Star Wars without adventure, and there’s definitely a series of events that will spin the galaxy into a dangerous new direction, and it’ll giveth e opportunity for heroes to rise up.”

So what is this Great Disaster? Few details were shared at the announcement event, besides the fact that it’s what jump-starts our story and is likely the thing that scares the Jedi and jolts them out of the peace. But I think we actually get insight into what this Great Disaster is by reading the official synopses of the first few books.

Light of the Jedi by Charles Soule mentions how the Jedi “must face a frightening threat to themselves, the galaxy, and the Force itself…” Into the Dark by Claudia Gray describes Jedi Padawan Reath Silas and says that “when the ship he’s traveling on is knocked out of hyperspace in a galactic-wide disaster, Reath finds himself at the center of the action.” And the synopsis for A Test of Courage by Justina Ireland begins by saying “When a transport ship is abruptly kicked out of hyperspace as part of a galaxy-wide disaster, …”

So I think that we can safely say that the Great Disaster is something that greatly impacts hyperspace travel, pulling ships out of hyperspace and stranding people in various places across the galaxy – and apparently, this is a threat to the Force itself? I’m assuming that this is all connected with the Nihil, who are going to be the primary villains of this era. Charles Soule explained at the press conference that the Nihil are able to use hyperspace in a very dangerous way, and since the Great Disaster seems to pertain to a hyperspace disaster, it may very well be the Nihil behind it all.

7. Concept artists were brought in!

A fun reveal at the press conference is that concept artists were brought in to work on creating and designing characters for this era, just like would happen in the pre-production stage for films! The video released by Star Wars showed Doug Chiang, VP and Executive Creative Director for Star Wars, working on stuff, and it was also revealed that the team brought Iain McCaig in to do some work. McCaig worked on the prequel trilogy and, as highlighted in the video, designed Darth Maul, among other characters.

So it’s pretty cool that this era is such a focus that concept artists were actually brought in to help visualize things!

8. Stories for all ages

The stories will be told across various mediums and publishers, and it was made clear that there will be stories for all ages – adults, teens, and kids – and that there will be stories for every Star Wars fan. In other words, they aren’t just going to be re-telling the same stories in different ways but are going to be exploring different stories and characters from the High Republic way in a fashion of inter-connected stories through various books and comics.

9. The Projects for Phase One 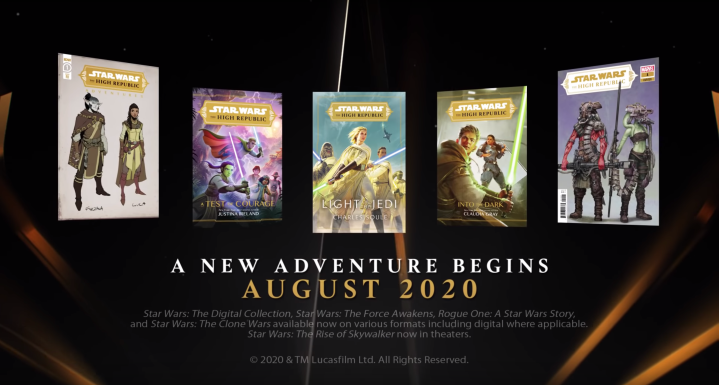 Announced last night are the projects for Phase One of The High Republic, and they include five works. The first is an adult novel called Light of the Jedi, written by Charles Soule. It releases on August 25, 2020, and kick-starts The High Republic era of storytelling. Here’s the description available:

“Two hundred years before the events of Star Wars: The Phantom Menace, in the era of the glorious High Republic, the noble and wise Jedi Knights must face a frightening threat to themselves, the galaxy, and the Force itself. …”

The next novel to be released will be a middle-grade reader called A Test of Courage, by Justina Ireland, releasing on September 8, 2020. Here’s the synopsis for that one:

“When a transport ship is abruptly kicked out of hyperspace as part of a galaxy-wide disaster, newly-minted teen Jedi Vernestra Rwoh, a young Padawan, an audacious tech-kid, and the son of an ambassador are stranded on a jungle moon where they must work together to survive both the dangerous terrain and a hidden danger lurking in the shadows….”

And then the third novel of Phase One is Into the Dark, a young adult novel written by Claudia Gray and releasing on October 13, 2020. The synopsis is as follows:

“Padawan Reath Silas is being sent from the cosmopolitan galactic capital of Coruscant to the undeveloped frontier—and he couldn’t be less happy about it. He’d rather stay at the Jedi Temple, studying the archives. But when the ship he’s traveling on is knocked out of hyperspace in a galactic-wide disaster, Reath finds himself at the center of the action. The Jedi and their traveling companions find refuge on what appears to be an abandoned space station. But then strange things start happening, leading the Jedi to investigate the truth behind the mysterious station, a truth that could end in tragedy….”

The official announcement from Star Wars made it very clear, seeking to get ahead of speculation, that the High Republic isn’t connected to the other projects currently in development at Lucasfilm.

“This period on the Star Wars timeline will not overlap any of the filmed features or series currently planned for production, giving creators and partners a vast amount of room to tell Star Wars stories with new adventures and original characters.”

Additionally, Matt Martin said on twitter that this era was developed by publishing independently. So while the era could possibly be available to future storytellers in other mediums, that isn’t currently the plan.

All this to say: it sounds like it’s currently just a publishing initiative, and that’s fine! Star Wars books and comics have greatly expanded the franchise in tons of really cool ways over the decades, and I’m excited to see an inter-connected publishing initiative that can tell important stories without having to just fill in gaps for the films (as much as I do love that too!). So while, if this is successful, I wouldn’t rule out films, series, or games also following, I think we must be clear that it doesn’t sound like that’s the plan at this moment.