After such a fantastic first season, I can’t wait to see the second season of Star Wars Resistance, presumably premiering this fall!  We will likely learn a lot of new information at the Resistance panel at Celebration, but as we wrap up season one and turn our attention toward season two, I’ve put together a list of some things that I’d love to see.

The end of the first season of Resistance literally overlapped with the events of The Force Awakens.  The season finale showed us the destruction of the Hosnian System from Kaz’s point of view, and at the end of the show our heroes intended to head for D’Qar, oblivious to the war that has broken out between the Resistance and the First Order.  So the first season ends just days before the events of The Last Jedi, meaning that the second season will almost certainly have to delve into the post-TLJ galaxy.  And since I’m assuming that the second season will be premiering in the fall, that means that our first on-screen look at the post-TLJ world will probably come from this show.  Now what I don’t expect is that this show will reveal any sort of key secrets crucial to Episode IX, but I do expect it to set the stage for the state of the galaxy we’ll be introduced to in Episode IX.  I want to see what the state of the galaxy is like.  I want to see the Resistance fighting to survive.  I want to see allies of the Resistance being recruited to the fight.  I want to see the impact that Luke Skywalker’s heroics on Crait has on the galaxy to inspire people.  And I want to see the war continue to escalate.

In season one, Resistance couldn’t really take super bold steps in the fight against the First Order until the very end of the season, because the Resistance and First Order were technically not engaging.  General Leia Organa made this very clear in one particular instance, ordering Poe Dameron not to engage.  Sure, the heroes occasionally did engage the First Order, but this show had to exhibit restraint when it came to the actual combat – something that noticeably changed at the end of the season.  Kaz and his friends don’t know that the Resistance has engaged the First Order in war, but they do begin to fight back and Kaz sees the Hosnian System destroyed.  But in season two, we’ll be in a period of open conflict.  The New Republic isn’t around to try to maintain peace this time.  The mighty First Order has seized control of the galaxy, and the Resistance fights back openly yet strategically.  I want to see the Resistance/First Order war escalate in this show.

Of course, you can’t show the Resistance growing and recruiting and fighting back without showing the Resistance’s inspiring leader, Leia Organa.  She’s the leader of the Resistance and in many ways is the glue that holds it together, and she’s obviously a beloved character both in and out of universe.  She will appear in Episode IX (with the role played one last time by Carrie Fisher), but I want to see more of Leia in season two of Resistance.  We got to see her a few times in the first season, but now in season two I want to see more of Leia as she attempts to hold this ragtag group of rebels together in the fight against the First Order.

In addition to Leia, I’d also like to see more tie-ins to the films when it comes to characters.  It was great seeing Poe Dameron and Captain Phasma both in the show, and I hope that the creators keep it up by continuing to tie-in characters from the films into this show.  Obviously that won’t happen with Phasma any more (unless they pull a Maul), but it could happen with Poe – and likely will.  I’d also love to see more of other characters from the films, though: Rey, Finn, Kylo Ren, Hux, etc.  Now, I want to be clear: I am not suggesting that these characters should become the main figures of the show.  The focus of season two should stay on its main characters, only now adding them into the larger Resistance.  But having cameo appearances from key Resistance figures in addition to Leia and Poe, like Rey or Finn or Rose, would be awesome.  And I’m hopeful that we’ll get a look at the First Order under the leadership of Supreme Leader Kylo Ren as well.

An inside look at the First Order!

I think that Resistance would be the absolute perfect place to continue to tell stories of Zay Versio and Shriv Suurgav.  These characters are from the Battlefront II campaign, and Shriv immediately became a fan-favorite amongst those who played the game.  Zay Versio, is the daughter of the game’s main character, Iden Versio, and we know that Zay is sent on a mission to recruit Resistance allies by General Organa right before the events of The Last Jedi.  I really want to see these stories continued, but J.J. Abrams has a ton to accomplish with Episode IX and that probably isn’t the best place to tell these stories.  But a show like Resistance has more space to explain to casual viewers who Zay and Shriv are, while allowing them to play supporting roles in certain missions or things like that.  The bottom line: I’d love to see Zay and Shriv show up in Resistance!

Star Wars isn’t exactly known for giving its heroes a lot of time to process grief – think, for instance, of Luke Skywalker’s reaction to the deaths of Uncle Owen and Aunt Beru, or Leia Organa’s reaction to the deaths of her parents and her homeworld.  But in a show format, the fallout has more room to be told – and Rebels did this by allowing the heroes significant space to grieve the death of Kanan Jarrus (an entire episode was devoted to them grieving and dealing with it).  I think it’s perfectly understandable why we didn’t see much of Kaz’s reaction at the end of season one, but now that the adrenaline has calmed down and the Colossus is ‘safe,’ I’m hoping that Kaz will be faced with the after-effects of the destruction of his homeworld and the deaths of his friends and family (at least as far as he knows).  I want this show to give him the space to grieve. 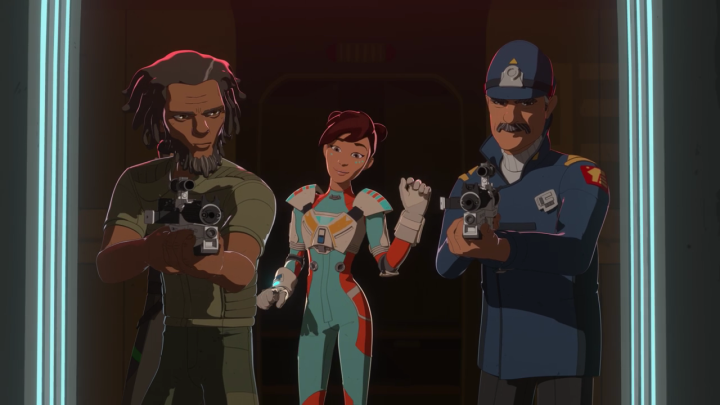 I’m really interested in the backstories of several of the characters, but probably most notably of Jarek Yeager and Captain Doza.  These two men are both veterans of the Galactic Civil War, fighting for opposite sides, and now they both seem to be committed to helping the Resistance.  We got teases and glimpses of their histories in season one, but I’d like to explore that more in season two.  In particular, as I explained in an article recently, I’d love to find out more about the Doza’s backstory.  But Yeager is my favorite character on this show, and I’d obviously love to learn more about his backstory as well.  I think there’s a perfect way to do that…

The photo in Yeager’s office of his family shows them at Black Spire Outpost on Batuu, so it’s clear that Yeager has a history on the planet (was it previously his home at some point?).  So if our heroes were to go to Batuu, it would be a great and natural way to delve deeper into Yeager’s history.  But it would also serve as another tie-in for Galaxy’s Edge, and since we know that the park’s story will include the First Order and Resistance both present on the planet, there may be a logical reason why it could come into play for our heroes as well.