The main Star Wars comic line is currently telling the stories of what happened to our heroes in-between A New Hope and The Empire Strikes Back.  One of the major moments came in the “Hope Dies” arc of the series, released in 2018, as the Empire traced the Rebellion to the Mako-Ta Space Docks.

The Rebels were betrayed by Queen Trios, and that led to Vader and the Empire launching a surprise attack.  To make matters worse for the Rebellion, Trios had also locked down their ships so that they couldn’t escape, nor could their fighters launch.  All hope seemed lost… until Han Solo and Chewbacca arrived.

And in the ensuing issues, we got to see some pretty great moments.  We’ve already talked about how the arc gave us resolution to the fates of General Draven and General Dodonna, but it also gave us some cool moments from a fan perspective: Solo dogfighting with Vader, Solo flying an X-Wing, and the heroic trio flying together.  None of this is new stuff, but it’s fun to remember these epic moments. 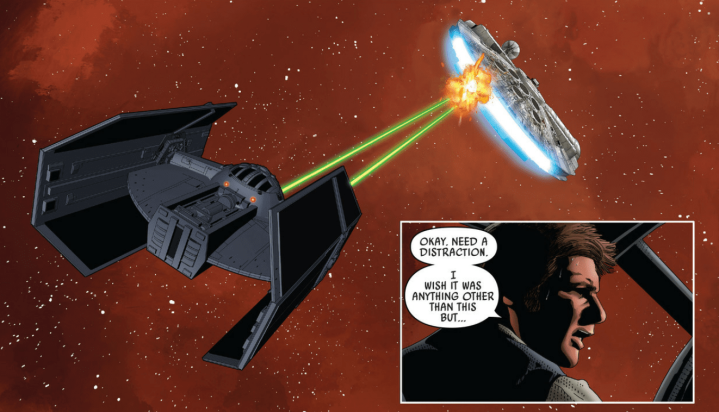 Han and Chewie arrive in the Millennium Falcon hoping to catch the end of the Rebel celebration, but instead are surprised to see the Empire is there.  With Luke Skywalker, Wedge Antilles, and the other Rebel pilots unable to launch, they can only watch as the Falcon engages the Imperial forces.  Vader, recognizing the ship, enters his TIE Advanced fighter and heads into the battle, engaging the Falcon in a dogfight.  It’s a pretty great moment to see two of the best pilots in Star Wars, Vader and Solo, fighting.  Much of Solo’s goal is to evade Vader, and he does this well.  He’s able to lose Vader to buy just enough time to launch C-3PO in an escape pod to tell Luke how to get around their ships being grounded.  There’s a fail-safe in place that, if ships fly at the doors, they will open.  Luke openly defies the orders of General Dodonna and tries it, and it works!  Wedge and the others then launch, and Luke calls their squadron “Rogue Squadron” for the first time, as a tribute to the crew of Rogue One.

But who wins between Vader and Solo?  Well, it’s hard to say.  Vader ends up shooting down the Falcon, but Han is able to crash land in a Rebel cruiser.  Han successfully evaded Vader’s TIE throughout much of the battle, but Vader did succeed in shooting Han down.  So both pilots got a chance to show off their skill.

With the Falcon damaged and the battle still very much going on, however, Han jumped in an X-Wing and took flight to aid Luke.  Meanwhile, Leia had successfully retrieved the codes from the Executrix and was fleeing in a TIE Fighter, but had no coms to alert the Rebels of this.  Han and Luke flew behind her, but Luke sensed something… and after Leia destroyed another TIE, Luke ordered Rogue Squadron to escort the TIE safely.  They later discover that it was Leia, and this allows them to escape.

But while Dodonna’s ship is able to escape, the other Rebels are not as fortunate.  So after some convincing, Dodonna heads back to the battle, and Solo launches again in an X-Wing – this time with R2-D2 as his companion.  Han helps to lead things while Luke and Leia fly a nondescript transport.

Eventually, the Rebellion is able to escape, albeit with heavy losses (with Han being saved by Luke and Leia).  And all of it was in large part thanks to the heroics of Han Solo.

But from a fan perspective, it’s just really cool to see these things happen.  They’re things that we never saw in a film, but they’re nonetheless things that many have wondered about.

What would happen if Han and Vader flew in combat against one another?  We got the answer to that, and it was great.  Neither one of them was so clearly outmatched, and both got their moments to shine.  It was handled really well.

Did Han ever fly an X-Wing?  We got to see that too, as he took to an X-Wing fighter to go aid his friends in the Rebellion.  That’s pretty great.  It also was a really nice touch seeing him partnered with R2 for a bit of it, which of course led to some pretty great banter.

And did our heroic trio ever fly together in separate ships?  We also got to see that.  Han and Luke both flew X-Wings, while Leia flew a TIE.  It gave us a chance to see Luke use the Force to sense that something was different, and they admitted that whoever was flying the TIE was a pretty good pilot.

All of this is really cool to see and read about, and I love that the comics have taken the opportunity to fill in some of the gaps and give us moments like this.