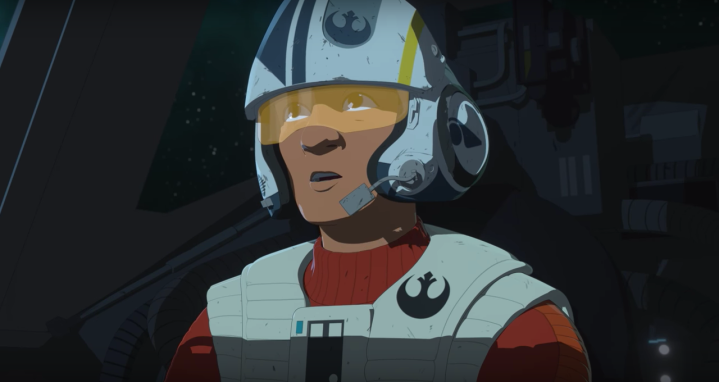 Since the start of Star Wars Resistance last fall, the show’s creators had made it clear that they would eventually overlap with the events of The Force Awakens in the first season.

When the events of the show begin, we’re about six months before TFA, but we have now crossed that period of time, and a recent clip previewing the upcoming episode – “The Core Problem” – reveals that it is literally about to overlap with the events of the film.

After the unsettling discovery of multiple cored and broken planets, Poe and Kaz must evade a series of First Order pilots in order to make it back to the Colossus alive in this clip from "The Core Problem." #StarWarsResistance is new this Sunday at 10pm ET/PT on @DisneyChannel. pic.twitter.com/7quxaTrSo0

In the clip, Poe Dameron arrives on the Colossus and is talking with Kaz and Yeager, but he says that checking in with Kaz was only part of the reason why he’s there.  The other reason is that he needs BB-8 for an important mission.  “Well, checking in with you is only half the reason I’m here,” Poe tells Kaz.  “We’ve got a big mission ahead of us.  BB-8, you ready to come home with me?  … I’ve just gotten orders from General Organa.  We’re leaving tomorrow for Jakku.  I need BB-8 on this one.”

Did you catch that?  Poe has been ordered by Leia to leave the next day for Jakku, which is where we first meet the Resistance’s best pilot at the start of TFA.  He’s on Jakku to get the map from Leia’s old ally, Lor San Tekka, hoping that it will be the missing piece the Resistance needs to find Luke Skywalker.  Ultimately, though, the First Order finds them and takes Poe prisoner, but not before he gives the map to BB-8, who eventually encounters Rey and Finn and thus the adventures of the sequel trilogy begin.  So it seems like this episode on Sunday, in which Poe and Kaz team up, takes place literally a day or so before the start of The Force Awakens.

We knew that this would happen, and thus we knew that Poe and BB-8 would be reunited soon enough.  And it’s pretty cool that the seeds of this were actually planted last year in the Poe Dameron comic.  In issue #26, which takes place after The Last Jedi, Poe tells Rey and Finn what happened to him during the events of TFA.  So we see Leia give him the mission to go to Jakku, and then Poe says, “I had to make a quick detour to pick up Beebee.”  So we’ve known for a while that Poe had to reunite with his droid buddy right before the mission to Jakku, and we now know that BB-8 was on the Colossus as part of another mission.

Overall, I think it’s really exciting that Resistance is about to cross over with The Force Awakens, and the fact that they’re doing so with several episodes left in the first season means that we should get plenty of time to focus on what happens on the Colossus.  It also means that we should be very close to seeing the destruction of the Hosnian System again and Kaz’s reaction to it, which figures to be a very emotional moment in the show.  Things have really started picking up in recent episodes with the First Order’s arrival at the station, and that looks to continue as the show will very soon officially overlap with the events of the sequel trilogy.