On Sunday the third episode of Star Wars: Resistance aired, continuing to introduce us to the characters and show us life on the Colossus.

The episode revolved around Kazuda Xiono’s relationship with his boss, Jarek Yeager, while giving us tidbits about Yeager’s past.  We were also introduced to some new characters, most notably Jace Rucklin – voiced by The Lord of the Rings star Elijah Wood.

Let’s take a look at this week’s episode! 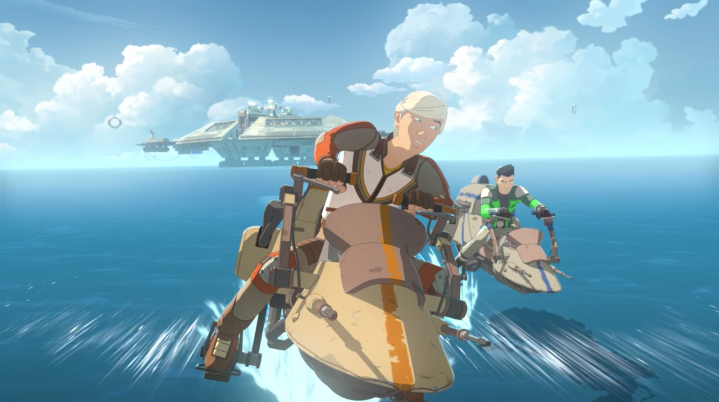 Life on the Colossus is not all it’s cracked up to be for Kaz.  He’s continuing to learn how to be a mechanic, but he’s also continuing to get distracted by his true passions: flying and spying.  Whereas in last week’s episode it was primarily the latter that distracted him, this time it’s the former.  Kaz is forced to keep working on an engine while the rest of the crew watches a race, so Kaz takes the engine outside to try to work on it while watching the race… only to not notice it rolling off the platform until it’s too late.  The engine is retrieved from the water, but Yeager isn’t happy and tells Kaz that if he blows his cover, it will put the entire crew at risk.  Kaz winds up in Aunt Z’s tavern, wondering openly whether staying with Yeager is best.

It is here that he meets a young racer named Jace Rucklin (Elijah Wood), who introduces KAz to his crew, Lin Gaava and Gorrak Wiles.  This crew is in many ways the antithesis to Yeager’s crew, as they’re mainly concerned with having fun, causing trouble, and not working hard.  Kaz befriends them, and he and Jace race speeder bikes over the water’s surface.  After an impressive move to pull out in front of Jace, however, Kaz’s bike malfunctions – only to be rescued by Jace.  We soon learn that Jace’s team sabotaged Kaz’s bike intentionally.  Kaz reunites with Yeager, who is upset about the young mechanic taking a long break.  Yeager tells Kaz to continue fixing the engine, but Kaz runs off again to meet up with his new friends.  He finds them in a hangar working on Jace’s ship, and they tell Kaz that the ship won’t ever be as fast as Yeager’s – a ship Kaz didn’t even know about – unless they get some Corellian hyperfuel.

Jace convinces Kaz to sneak him into Yeager’s private hanger to get a look at his racer, which Kaz reluctantly agrees to do since Jace saved his life.  They sneak into Yeager’s office, where Kaz discovers that Yeager was in the Rebellion, fought in the Battle of Jakku, and had a family.  That causes him to have second thoughts about breaking in, but he can’t figure out a way into the hangar anyway.  Jace secretly steals a container of hyperfuel and leaves.  It doesn’t take long for Bucket to discover that it is missing and alert the rest of Team Fireball, and they explain to Kaz that an untrained person using too much of it would create an explosion.  Kaz immediately realizes that Jace stole it, and rushes off to save him.  Jace’s ship is just about to launch when Kaz arrives, and he jumps onto the ship as it takes off.  He manages to pull Jace’s eject button right before the ship explodes, but as they’re falling Jace explains that he removed the parachute to lose weight.  BB-8 launches a cable that catches the two falling young men, but the droid struggles to hold it as he slowly slides off the platform.  At the last second, however, Yeager arrives and helps BB-8 pull them to safety.

Jace is furious with Kaz for his ship’s explosion, but Kaz is upset with Jace for stealing the hyperfuel.  Jace and his team leave, and Yeager tells Kaz that they must not attract attention as he watches Captain Doza looking over them.  Kaz apologizes to Yeager and tells his boss that he’d understand if he were fired, but Yeager tells him to get back to work: “You may not be the greatest mechanic, and you’re a questionable spy at best, but you’re a good person Kaz.  I get that.  And that kid was lucky enough to have you as a friend.”  Yeager assigns Kaz to clean some parts outside, where he realizes he can watch the race too!  Tam remarks that Yeager might like him, and Kaz agrees… all the while the cart of parts he was supposed to watch rolls off the edge of the platform while he’s not looking.

Overall, I thought this episode was fine, but perhaps it’s true value will be better determined down the road.  That’s because at this point, it simply felt inconsequential.  It was a fine episode, but whereas last week’s episode at least familiarized us with the First Order’s plan, this one was all about Kaz still trying to find his place.  This character development is needed, I have a feeling that we’ll be seeing Jace and his crew down the road again, and I’m super intrigued by Yeager’s character – so all of that, plus the fact that I found this episode entertaining enough, was good.

It seems that a main theme of these early episodes is introducing us to the character of Kazuda Xiono.  We met him in the first episode, and then these past two episodes have been showing us his struggles to adjust to life on the Colossus.  He wants to do big, important things for the Resistance, so he doesn’t want to spend time as a mechanic.  In this episode in particular, he begins to question whether sticking with Yeager is the right thing to do, as he grows frustrated with his boss.  So while last week’s episode seemingly motivated him to at least try more as a mechanic, perhaps this week’s episode will motivate him to trust Yeager more.  I’m excited to start seeing all of these things come together and start paying off, but I think the show has to start by letting us get to know Kaz, especially in regards to his duties and relationships.

But my biggest takeaway from this episode is this: Jarek Yeager continues to be my favorite of the new characters, and he’s the one I’m most interested in learning more about.  We already knew that he is friends with Poe Dameron and that the two go way back, but we get a few important details about his life in this episode.

In this image, we see Yeager in his Rebellion flight uniform celebrating with other pilots on Jakku.  We see a crashed Star Destroyer in the background, signifying that this picture was probably taken after the battle ended.  We have heard plenty about the Battle of Jakku in other canon media so far, as it was the last major conflict of the Galactic Civil War as New Republic Admiral Gial Ackbar led their forces against the remnants of the Empire and routed them.  Before the show began we had learned from some of the showrunners that Yeager was a former Rebellion pilot, and this shows us that as Kaz finds out.  I’m super interested in learning more about his Rebellion days, including what stories he has or interactions he had with people like Leia Organa, Luke Skywalker, Han Solo, Wedge Antilles, and others… including Kes Dameron and Shara Bey, Poe Dameron’s parents.  I’m guessing that this connection is why Yeager goes way back with Poe and knows him.

We also see this picture of Yeager’s family, with his wife and child.  Kaz mentions that Yeager “had” a family, which indicates that something happened to them, and that would line up with the fact that he’s now working on the Colossus with no sight or mention of them.  In other words: there must be a backstory here, and I’m incredibly curious to find out what happened.  Also, as some astute observers have pointed out, the background of this picture looks incredibly similar to Batuu… leading us to think that this probably is Batuu.  So is Yeager actually from Batuu?

I’m super interested in learning more about Yeager’s character, and I’m sure that we will soon enough.  In the meantime, Kaz is also finding out that there’s a lot about his boss that he doesn’t know, and he’s learning to trust him a little bit more as he keeps finding out that not everyone on the platform is trustworthy.  Like I said, this is a fine episode that will likely grow richer with time, but even now it’s an entertaining episode.