On Monday night, the final episodes of Star Wars Rebels aired, bringing to a close the four-season run of the latest successful endeavor from Dave Filoni and his team at Lucasfilm animation.

We know that even though Filoni is done with Rebels, he’s not done with Star Wars storytelling, and we’re eagerly awaiting the announcement for just what those next steps will be.  However, the finale of Star Wars Rebels seemed to be just as much of a beginning of future stories as it was an ending to this one.  As one chapter closes, another begins.

We’ll dive more in-depth into these episodes on Tuesday, as I’ll have full reviews up then, but for now let’s delve a bit into the ending of the series and look at how it could set up what’s next.  Obviously, ***massive spoilers are ahead*** so if you haven’t seen the episodes yet, this is your warning. 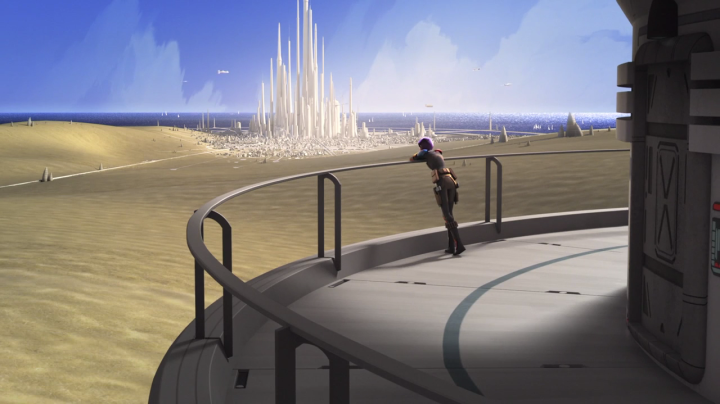 The ending to Star Wars Rebels jumped us forward a few years, to the post-Return of the Jedi era, as we learn that the Empire never retaliated for the defeat on Lothal.  Instead, they became preoccupied with a larger war that culminated in the decisive victory of the Rebellion at Endor.  It is in that setting that Sabine narrates the fate of (most) of the Ghost crew.

Perhaps the most heartwarming of all of the character fates was that of Zeb and Kallus, who journey to Lira San – where Kallus meets the surviving Lasat, realizing that he didn’t actually wipe them all out!  Kallus is accepted into the community, and he and Zeb live among the Lasat on Lira San.

We don’t actually see Rex in the epilogue, but we do hear about him: Commander Rex fought during the Battle of Endor, just like Hera did.  So this tidbit, plus his outfit in the episode, seems to confirm that Rex is in fact the soldier formerly known as Nik Sant, a member of Han Solo’s strike force to the forest moon of Endor in Return of the Jedi. 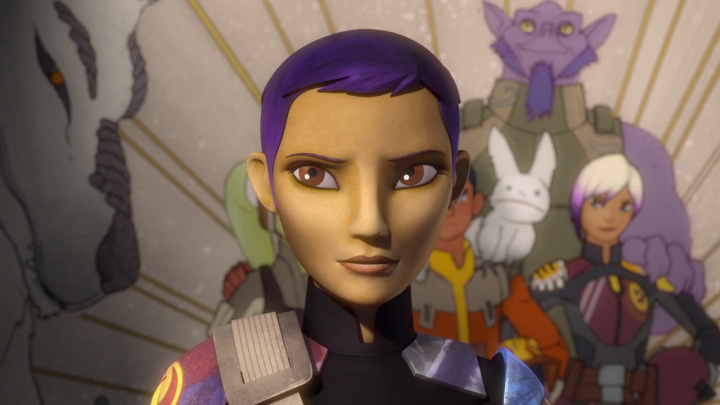 Sabine explains that she thought what Ezra meant when he said he was counting on her was to protect Lothal, but she realized that there’s more: Ezra is alive, and she needs to find him and bring him home.  So we see Sabine head off with Ahsoka the White and fly off into the sunset, off in search of Ezra Bridger. 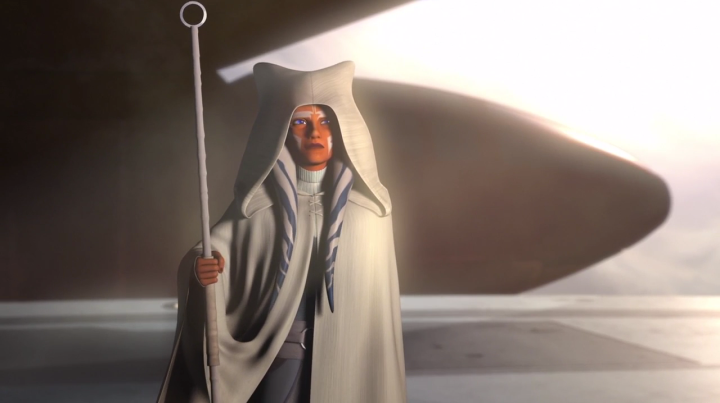 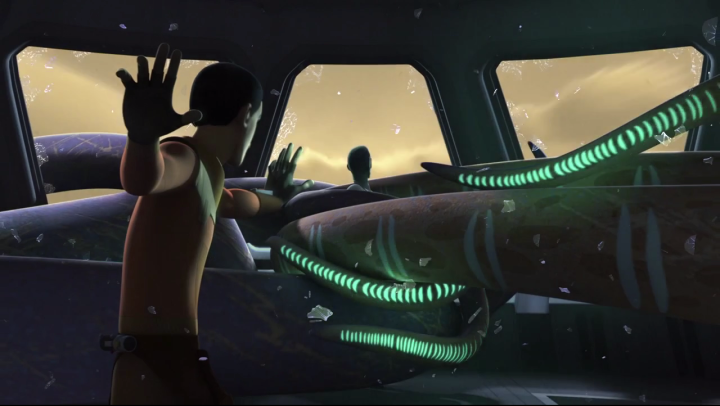 In the decisive turning point of the Battle of Lothal, the purrgil emerge with the Ghost out of hyperspace and destroy Thrawn’s fleet, and as the tentacles ensnare the Grand Admiral aboard the bridge of the Chimaera, the purril jump into hyperspace pulling the Chimaera with them, with Ezra and Thrawn on board.  So what happened to them?  We’re not told, though the implication is that Ezra is still alive, as Sabine and Ahsoka set out to find him in the epilogue. 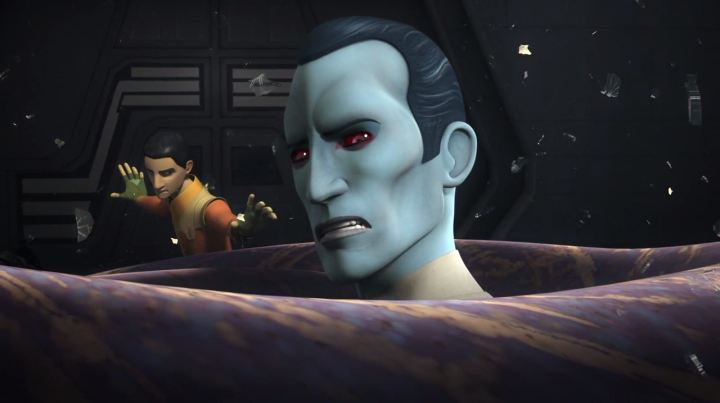 Star Wars Rebels brought a satisfying conclusion to its storyline, liberating Lothal and sending the remaining members of the Ghost crew off into the sunset.  It took the Jedi out of the picture for the original trilogy, and did the same for Grand Admiral Thrawn.  Hera and Chopper lived on to fight for the Rebellion, Zeb had a heartwarming homecoming, and Sabine seemingly stayed on Lothal to ensure that what Ezra started would be completed.  That’s how you’d expect a series finale to go.

But Rebels did something more than that: it set up a new story, with a new beginning.  Though the Rebels story is done, perhaps its characters are not.  The common expectation is that Dave Filoni’s next project will be an animated show set in the post-Return of the Jedi era, which would give the opportunity to explore Luke Skywalker’s Jedi efforts, explore Luke’s Jedi Academy (which could even include Jacen Syndulla?), show the New Republic, develop Han Solo and Leia Organa’s family with Ben Solo, etc.  There’s a ton there to focus on, and I hope that’s the direction Filoni choses to take.

But if the conclusion of Rebels has anything to say about it, perhaps there’s another storyline to focus on in that series too: Sabine and Ahsoka’s quest to find Ezra Bridger.  Filoni wasn’t afraid to bring characters from The Clone Wars into Rebels (Ahsoka, Rex, Gregor, Wolffe, Hondo, etc.), and we shouldn’t assume that it’d be different for his next project.  There’s still the chance to tell more stories about these characters in a different setting, and it seems that Rebels leaves that possibility open.

And, of course, the villain’s right there for them too.  If Ezra survived that hyperspace jump, it should be assumed that Thrawn did as well.  It seemed like Rebels was always going to have to find a way to send Thrawn into the unknown regions for the events of the original trilogy, and this seems to be the way it did so, albeit in an unexpected manner.  Having the opportunity to have Thrawn re-emerge and oppose the O.T. heroes seems like too good of a chance to pass up in a post-ROTJ series, as it would give Filoni a tremendous villain to work with while pleasing hardcore Star Wars fans who fell in love with Thrawn’s character from Timothy Zahn’s Heir to the Empire trilogy.  Leaving Thrawn’s fate open the way Rebels did would also open the door to a potential return for the Grand Admiral down the road.

In short, while Star Wars Rebels offered a satisfying conclusion to its series, it also introduced new possibilities for future stories, which in many ways could serve as the beginning to something else.

In a Q&A following the premiere screening of the Rebels finale last week, according to Entertainment Weekly’s Anthony Breznican, Dave Filoni said that while he knows whether there will be more stories told about these characters, he can’t say yet.

That silence seems to speak volumes; I expect there will be.  And the ending to Star Wars Rebels sets it up perfectly.