Ever since Ahsoka Tano’s battle against Darth Vader on Malachor ended in ambiguity, Star Wars fans have been asking the question: did she live?  Dave Filoni promised that we’d get some clarity on that before Star Wars Rebels ended, and we certainly did, as last week’s episode “A World Between Worlds” revealed what happened.

And whether you agree or disagree with the decision taken, one thing that’s really interesting to me is that Filoni was playing the long game both with Ahsoka’s fate and the situation of the world between worlds.  Let’s dive in to that long game and look at how it’s a masterfully-told and crafted story.

Obviously, there are spoilers ahead.

The journey to “A World Between Worlds” started way back in season one, when Ezra and Kanan journey to the Lothal Jedi Temple.  Ezra undergoes tests, and he eventually winds up in a strange open space to receive his lightsaber crystal.  “I started seeding in season one this idea of a place where there are stars,” Dave Filoni said on last week’s Rebels Recon.  “When Ezra’s in the Jedi Temple and he gets his lightsaber crystal, he’s in that world between worlds, he just doesn’t know it yet because he’s too naive and he’s not fully unlocked.”  Already in season one, then, there was a hint of this world between worlds, but the audience didn’t understand the fullness of what they were seeing.

The rebels had been receiving guidance from a mysterious agent known as “Fulcrum,” and after receiving help from the greater rebellion in rescuing Kanan the rebels find out who Fulcrum truly is: Ahsoka Tano.  She’s been working with the rebellion, and she takes an interest in the Ghost crew due to their Jedi.

Realizing that she’s in trouble, Minister Tua reaches out to the rebels for help after Darth Vader’s arrival on Lothal.  She offers the information of other rebel cells in exchange for extraction, but the rebels are uncertain that’s enough.  It’s at that point that Minister Tua says: “There’s something else.  I’ve discovered the true reason the Empire came to Lothal.”  Hera replies, “We know that one.  The Empire has a factory and they’re stripping the planet’s resources to fuel it.”  Tua responds, “No.  There is another reason.  Known only to a few, and ordered by the Emperor himself.”  The Emperor has had his eyes on Lothal for a while, then, and while it’s unlikely that he actually knows the details of what the Lothal Temple contains (if he did, he’d likely be much more eager to take care of it and to do so personally), he knows there’s something there.

With Vader on the offensive in his TIE Advanced, Ahsoka joins the Ghost crew in an effort to protect the fleet.  She and Kanan use the force to try to discern who this Sith Lord is, but Vader realizes who she is too, as he exclaims, “The apprentice lives!” before Ahsoka faints.

Ahsoka sends the Ghost crew to recruit an old friend of hers, Captain Rex.  Kanan obviously has trouble trusting Rex and his fellow clones initially, but after fighting alongside them the Ghost crew brings Rex back to meet up with Ahsoka and join the fight. 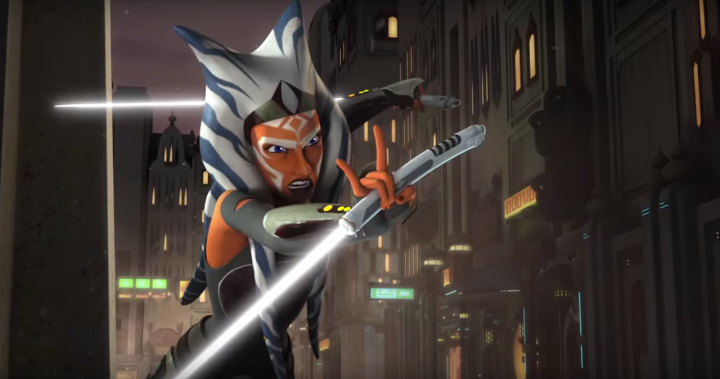 Brandishing her lightsabers for the first time in the series, Ahsoka arrives at just the right time to rescue Kanan, Ezra, and Zeb – who were on a mission to save a force-sensitive child from the clutches of two Inquisitors.  Ahsoka fights them off and bests them, but as Imperial reinforcements arrive she escapes with the rest of the rebels. 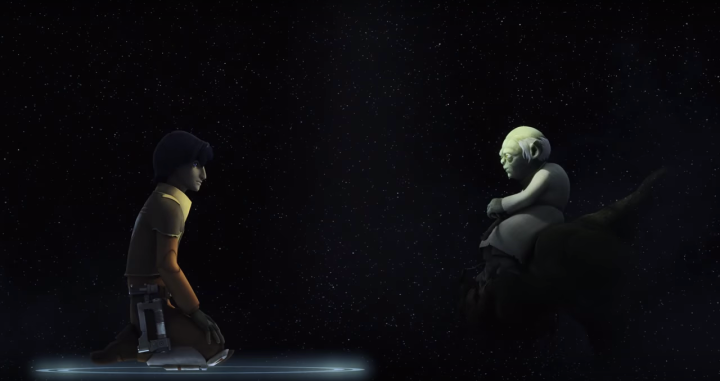 Ezra, Kanan, and Ahsoka journey to the Lothal Jedi Temple in season two and all experience visions: Kanan has a vision of the Grand Inquisitor as a Temple Guard, Ahoska has a vision of Anakin and Vader, and Ezra has a vision of Yoda.  As Dave Filoni told Rebels Recon last week, Ezra’s actually once again in this world between worlds, only without knowing it and without having full knowledge of what it is: “The next time he’s there with Yoda.  And Yoda obviously knows about because Yoda’s talking to him through this, it’s some kind of conveyance where they can both exist in this place.  But they probably aren’t very far from where they are physically.  This doesn’t have anything to do with the physical, it has to do with kind of where they believe they are and where they are mentally.”  So Yoda is obviously aware of this, which is very interesting, but does he know the full secrets contained or is it, like the Emperor, simply a knowledge that there’s something mystical there?

Vader discovers the entrance to the Lothal Temple (Season 2, Episode 18)

The Inquisitors managed to infiltrate the Lothal Jedi Temple in pursuit of Ezra, Kanan, and Ahsoka (who had previously opened it), and though the Inquisitors didn’t capture them they did find the Temple.  So when Darth Vader arrives, he says, “My master will be most pleased with this discovery.”  In light of what Minister Tua said earlier and in light of what we now know, it makes sense why the Emperor would be pleased about the discovery of the Jedi Temple – because he now knows the location to focus his interest.

In what is perhaps still the most popular and well-known scene of Star Wars Rebels, Master fights Apprentice as Ahsoka confronts Darth Vader on Malachor.  Ahoska proves to be quite the test for the Sith Lord, holding her own and fighting him off long enough for Kanan and Ezra to escape.  Before Ahsoka can escape, however, she hears Anakin Skywalker’s voice – muffled through Vader’s broken mask – say her name.  “I won’t leave you,” she tells him.  “Not this time.”  Vader’s response: “Then you will die.”  The temple closes as Ahsoka continues fighting Vader, and Kanan and Ezra presume she dies.

Though Ahsoka is presumed dead, the end of “Twilight of the Apprentice” leaves it vague: after we see Vader leaving the ruins, we see Ahsoka descending into the Temple.  But was it a force journey after life, or was it actually her? 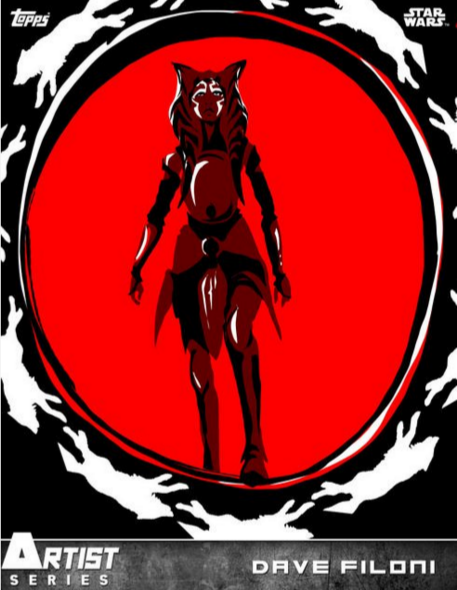 As fans wondered what happened to Ahsoka, Dave Filoni gave mysterious hints through a series of Topps trading cards that were released a few years ago.  People attempted to guess what it all meant, as it showed Ahsoka walking through this passageway and featured the convor and the wolves.  That led to speculation that perhaps Ahsoka was the convor or was the wolf seen in this season of Rebels, but nobody could have guessed what the actual reality was.  But in hindsight, Dave Filoni actually hid Ahsoka’s fate in plain sight: one of the trading cards showed Ahsoka walking through a doorway that is the same doorway Ezra enters on Lothal to enter the world between worlds (the episode is even called “Wolves and a Door”).  It was a genius move by Filoni, because he put it out there for everyone to see knowing that nobody would understand it until Rebels explained it.

In “A World Between Worlds,” Ezra (and the viewer) finally gets to see what happened to Ahsoka after the temple closed in “Twilight of the Apprentice.”  Ahsoka continues her face-off against Vader, and as the temple starts to destruct Ahsoka stabs the floor with her lightsabers, causing it to crack underneath Vader.  He swings to kill her, but at that moment Ezra reaches through the portal and pulls Ahsoka away, as Vader falls through the collapsing floor.  The answer to Ahsoka’s fate was finally clear: Ahsoka lives. 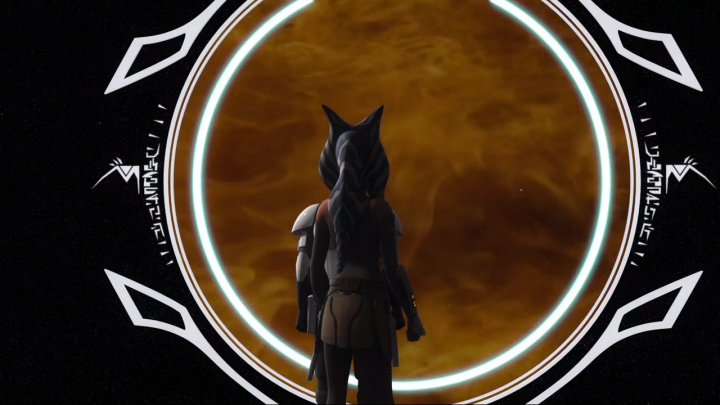 As Ezra realizes that he might be able to save Kanan like he saved Ahsoka, she cautions the young Jedi against it.  She explains that Kanan sacrified his life so that others might live, so Ezra can’t just change the former without impacting the latter.  “You don’t understand what you’re asking me to do,” Ezra responds.  “Yes, I do,” Ahsoka answers.  “You can’t save your master, and I can’t save mine.  I’m asking you to let go.  This is a very significant moment in Ahsoka’s story, because she finally admits that she can’t save Anakin Skywalker.  We got hints in season two that Ahsoka still believes Anakin can be saved, but here she acknowledges that she won’t be the one to do it, if indeed it’s even possible.  This is also Filoni’s way of making it possible for Ahsoka to still be alive in the original trilogy era, if he wishes: first because she’s not a Jedi anymore, but more importantly because she realizes she can’t save Anakin.  There’s only one (or maybe two) that can do that.

After Ahsoka helps teach Ezra that lesson, the Emperor arrives, saying, “Ezra Bridger and Ahsoka Tano, mine at last!”  Ahsoka and Ezra try to push back the blue force smoke that the Emperor throws at them, and Ahsoka manages to sever its grasp on Ezra at one point.  But ultimately, they’re fortunate to just escape from the Emperor’s clutches and prevent him from gaining access to this world between worlds. 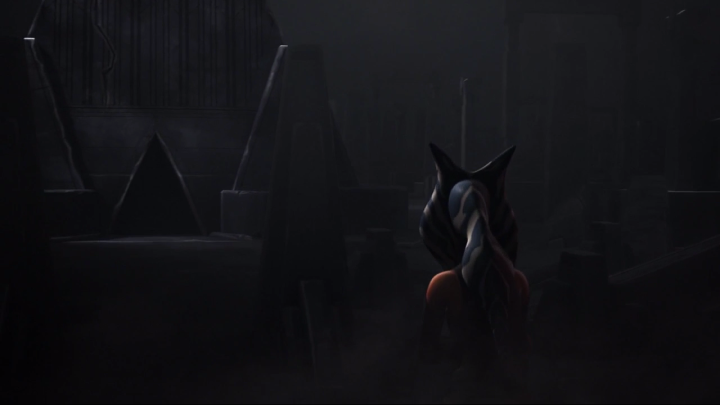 At the end of “Twilight of the Apprentice,” we saw Ahsoka descending into the temple on Malachor.  That’s exactly where we see her at the end of “A World Between Worlds,” too.  We know now that she was saved from Vader’s wrath by Ezra Bridger, and that she spent time in this world between worlds, and that the reason she’s clutching her arm is because of the Emperor’s attacks… but we still don’t actually know anything further about Ahsoka’s journey.  What we know is filled-in gaps, but we don’t know new knowledge.  We still see her descending into the temple, with a journey still left ahead of her.