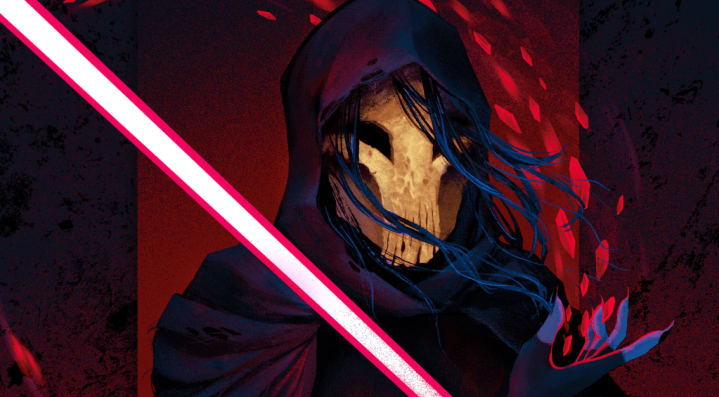 Coming this summer is a Star Wars novel that is likely to be pivotal to setting the context of the sequel trilogy, Adam Christopher’s Shadow of the Sith.

The book will tell the story of Luke Skywalker and Lando Calrissian searching for Exegol, which was first mentioned in The Rise of Skywalker. That means the Sith assassin Ochi of Bestoon will play a role in it, as will other Sith loyalists and mysterious villains. One such figure was recently revealed in an excerpt of the book released by io9, about an unknown masked villain. Not much is revealed about her, but it is clear that she is loyal to the Sith, wields a lightsaber, and is implied to be Pantoran.

Furthermore, io9 added this when introducing the excerpt: “Who is this strange, lightsaber-wielding figure? We don’t know for sure yet, but io9 can confirm that if you’ve been reading the canon Star Wars novels, the true identity of this masked figure will be a familiar face to you.”

So there’s another piece of information, as this is a character that will be familiar to those who read the books. That means that while this character will be familiar (meaning we’ve seen her before), it will have come in the books (and likely not at all on screen). Based on all of these factors, both from her description in the excerpt and from the tidbit from io9, I have a guess as to who it is.

In the Aftermath novels by Chuck Wendig, set in the year following Return of the Jedi, there are interlude chapters that break away from the main story to explore what’s going on across the galaxy in the wake of the Empire’s defeat at Endor. One such interlude deals with the Acolytes of the Beyond, a group of Sith worshippers who are active in this period (and even acquire what they believe to be Darth Vader’s lightsaber). In both Life Debt and Empire’s End, one member of the Acolytes that is directly mentioned is Kiza. She participated in a rebellion on Corellia (where she grew up) and an attack on a New Republic outpost on Devaron, and she was recruited by the Acolytes to join them. Of note, she is a Pantoran female loyal to the Sith who wields a lightsaber.

Furthermore, there are two other aspects worth highlighting. First, the books do note that she wears a mask of an old Sith that has a dark effect on whoever wears it (though this mask belonged to Exim Panshard, it seems to function very similarly to the mask of Momin, for those familiar with that from the comics). The image that was released of this mysterious villain in Shadow of the Sith also wears a mask that might fit this. Second, the books explain that the Acolytes of the Beyond speak much about the “shadow,” and reading this excerpt the theme of shadow is prominent as well.

Given the fact that the description of these two seems similar, and that there seem to be further connections with the Acolytes of the Beyond, I’m going to guess that we’ll see Kiza show up in Shadow of the Sith. That would be a pretty minor connection in the sense that most fans wouldn’t know, or remember, who she is, but it would be a very cool one nonetheless. Instead of just creating a new character for this role, they’re taking someone who has appeared previously and using them instead. I think that’s great! It’s a small connecting tie to the Aftermath novels, and each one of these steps helps the whole timeline feel more and more unified.

We’ll find out whether this really is Kiza soon enough, when Shadow of the Sith releases on June 28.