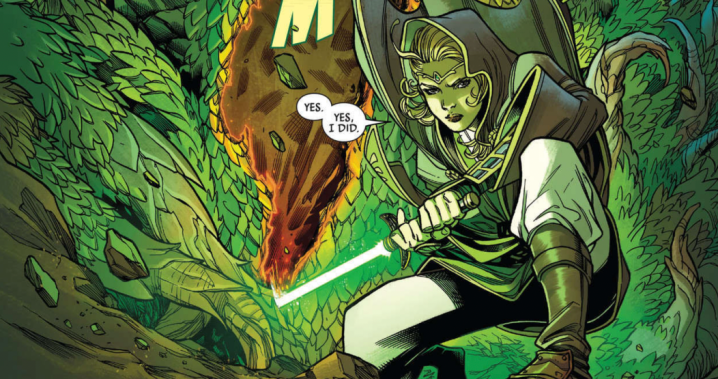 There’s a lot happening in the third issue of Cavan Scott’s Star Wars: The High Republic comic series, including the introduction of a dangerous villain: the Drengir!

But that’s not the only problem they face, and there’s a lot to talk about. So let’s dive in to our review!

At the end of the previous issue, the Jedi Ceret mysteriously vanished, seemingly taken by a creature in the fields on Sedri Minor. Ceret’s twin, Teret, senses this, and the other Jedi travel to the planet to meet with Sskeer. That’s where this issue picks up, and Teret and Sskeer get into a fight aboard the ship while Avar Kriss tries to maintain control. Meanwhile, Keeve Trennis stands outside the ship talking with the locals, when an authority figure shows up and insists they don’t need any help. But Keeve learns from the locals that four of them have also vanished.

Keeve senses their fear betraying their insistence that they don’t need help, and so she heads off alone into the field to investigate. Before long she finds a boy named Bartol, who is looking for his friend. She tries to stop him, but he trudges along through the field, with Keeve following, until they come across a giant sinkhole in the ground. Bartol jumps in, while Keeve follows and uses the Force to slow the kid’s fall. As they do, Keeve senses a shadow and says that there’s something down there that knows they are coming.

Back aboard the ship, Avar Kriss mentions that she is surprised Sskeer didn’t sense the dark side when they arrived. She contacts Maru aboard the Starlight Beacon, where he is overseeing an autopsy of the Hutt the Jedi found (in the previous issue). Avar heads off to find Keeve, while Sskeer stays behind to watch Terec.

Exploring further the cavern through the sinkhole, Keeve and Bartol soon find the missing people, including Ceret – having been taken captive by the Drengir! The others are dead, but Ceret is still alive – but under the influence of the Drengir, which attacks Keeve. Back on the ship, Terec wakes up, apparently under some sinister influence, and breathes something on Sskeer, who runs out of the ship in distress.

Keeve tries to fight off the Drengir while Ceret takes Bartol… and then Avar Kriss slices through the roof, and as she falls gracefully into the room she also slices the Drengir in half. She uses the Force to get through to Ceret, but by then the Drengir have healed – and now there is two of them, readying to strike. And in their control stands Sskeer, lightsaber ignited, ready to fight.

There is a ton happening in this issue! But let’s start with Sskeer. He was a central character in the first two issues, and in each of them, we came away really wondering what was going on with him – the dark side was growing within him. That continued in this issue, as at the beginning he fights against Terec, and Avar Kriss points out that he brutally attacked a Nihil and lost Ceret within minutes. Sskeer doesn’t react well to this, punching Terec. Sskeer continues to descend toward darkness – and he gets there at the end of the issue, but not willingly. It appears that through the inseparably-linked bond shared by Terec and Ceret, the Drengir are able to take control of Sskeer even though he’s still aboard the ship. This leads him to the point where, in the last page of the issue, he’s being controlled by the Drengir. So that doesn’t appear to be his doing, but nonetheless he continues to turn to the dark side in some concerning ways.

I suppose we should now move on to the Drengir, which is revealed to be the culprit behind the disappearances. In case you’re unfamiliar with the Drengir, they were introduced in Into the Dark, and they are a species of sentient, carnivorous plants strong with the dark side of the Force. They are able to control and eat any meat, and they represent a formidable foe for the Jedi. In Into the Dark they take the Jedi Dez Rydan, and here they take Ceret (and then Sskeer). They are not to be taken lightly, and as we’ve seen in both Into the Dark and this issue, they are very hard to kill, because they are able to regenerate and heal very quickly. When we saw the tentacle arm appear from the field right before Ceret disappeared in the last issue, we suspected the Drengir – and now it’s confirmed. One cool aspect of this is that this issue gave us some new illustrations of the Drengir, helping us to better visualize them. But we don’t know how they got to this planet, nor do we know how the Jedi will defeat them.

Speaking of Jedi, Avar Kriss gets a pretty epic entrance in saving Keeve and (seemingly, at the time), defeating the Drengir. That was great. I’m a big fan of Avar so far. But she’s also balancing a number of things in this issue, as not only does she have to try to constrain Sskeer and then rescue Keeve, but she’s also keeping tabs on the autopsy of the Hutt – which from the sounds of it, is most definitely not standard procedure. She’s trying to figure out what the Nihil are up to, but there’s quite a bit going on.

And of course, this issue ends on a cliffhanger, so we’ll have to wait until next time to see how the Jedi manage to escape (presumably) from the Drengir, and see further what’s going on with Sskeer. But I’m loving this story so far, and this was another strong installment.