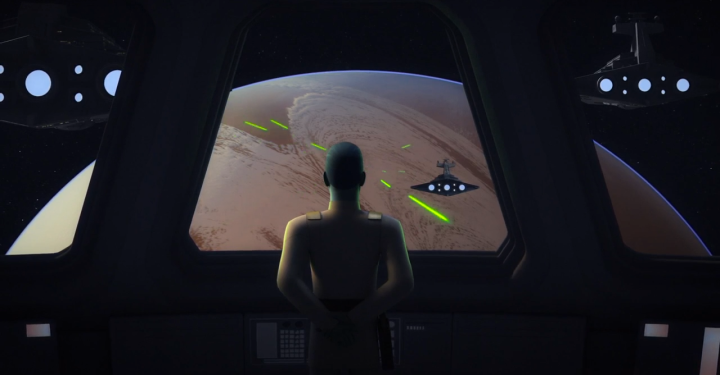 All it took was one line.

In Chapter 13 of The Mandalorian, we saw Ahsoka Tano come to live-action for the first time ever, rightfully drawing most of the attention. But another fan-favorite character was mentioned for the first time ever in live-action, and I don’t think it’s overstating things to say that one line blew the possibilities and potential for future storytelling in this era wide open.

That line, of course, came as Ahsoka interrogated the magistrate, Morgan Elsbeth. “Now tell me: Where is your master?” Ahsoka asked. “Where is Grand Admiral Thrawn?”

Most immediately, that just tells us that Ahsoka is on a mission to find an Imperial. She needed to have some purpose in what she was doing, and this provides it. But any random Imperial could have filled that role; by name-dropping the blue-skinned Grand Admiral, it becomes so much bigger.

Firstly, as I have already written, I think that this strongly connects with the future of Ezra Bridger. Star Wars Rebels ran for four seasons, and in the finale, as the Rebels fought to liberate Lothal from the Empire and Thrawn fought against it, Thrawn and Ezra were taken away into hyperspace aboard the Chimaera by purrgil (space whales). They disappeared, and no one knows where. All we know is that showrunner Dave Filoni confirmed that they both survived the hyperspace jump. The epilogue of Rebels, then, showed Ahsoka Tano and Sabine Wren heading off to find Ezra, sometime after the Battle of Endor.

So the ending of Rebels left the door open for future stories to be told about the search for Ezra and Thrawn, and a sequel series about that has been rumored. I would be shocked if that story isn’t explored in the near future by Dave Filoni.

In fact, my opinion of this name-drop in the episode is that it’s setting up exactly that. Here’s my guess on what’s going on: Thrawn has returned, and Ahsoka has heard about it. She hasn’t been able to locate Ezra, so she thinks that tracking down Thrawn would give her a lead. After (presumably) finding out some information from the magistrate, Ahsoka heads off to get Sabine to begin their search. So, in other words, I am of the opinion that the end of the epilogue to Rebels probably takes place after this episode of The Mandalorian. And if that’s the case, then name-dropping Thrawn could be a lead-in to the sequel series to Rebels.

So it sets up that series, but it’s so much bigger. Because with this one name-drop, there is the potential – should Lucasfilm choose to go this route – to have a major story to tell on a galaxy-wide scale post-ROTJ. To understand this, we need to first understand what has come before. In 1991, Timothy Zahn wrote Heir to the Empire, the first of three books commonly known now as the “Thrawn trilogy.” This trilogy had a massive impact on starting and shaping the expansive Legends material, as it told the story of a Chiss Imperial Grand Admiral named Mitth’raw’nuruodo (Thrawn, for short) re-emerging from the Unknown Regions five years after the Battle of Endor. He brougth together the Imperial remnants under his rule and threatened the very existence of the New Republic, drawing Luke Skywalker, Han Solo, Leia Organa, and other with the New Republic into another war. Through his brilliant tactics and calculated moves, Thrawn came incredibly close to overthrowing the New Republic, but in the end was betrayed and killed.

Here, in The Mandalorian, is the closest we’ve come to that in canon material. We know a lot about Thrawn’s story before the Battle of Yavin, up until he was mysteriously jettisoned to an unknown location. But we know nothing about what happened after that. However, this episode definitely gives off the impression that Thrawn has returned. The magistrate, Morgan Elsbeth, is working for Thrawn, and that doesn’t seem to be an old allegiance. Her HK assassin droids bear the markings of the Seventh Fleet, which was under Thrawn’s command. It seems that somehow, Thrawn has returned.

So think about it: if that’s true, it means that Thrawn has returned (presumably from the Unknown Regions) five years after the Battle of Endor. Sound familiar? Now, let’s be clear: Lucasfilm will not be re-telling Heir to the Empire. There are plenty of parts of that trilogy that don’t fit in with the new canon, and plenty of parts that shouldn’t fit in either. But this all does open the door to a potential Thrawn crisis for the New Republic that tells a new story but bears some similar plot points to what so many Star Wars fans came to love in the 1990s. What if Thrawn has returned and is secretly pulling together the Imperial remnants (those that didn’t flee to form the First Order) to strike against the New Republic, pulling them into conflict? After all, some New Republic pilots know that there’s something mysterious going on in the Outer Rim.

I have a hard time believing that there was just thirty years of uninterrupted peace in-between Return of the Jedi and The Force Awakens, and there’s a very large period of time that remains completely unexplored. By name-dropping Thrawn in this time period and implying that he returned, Star Wars has opened up a whole era of storytelling possibilities.

I’m not sure if any of this will be picked up in The Mandalorian or not, but I really do hope it’s picked up somewhere. Telling canon stories of a Thrawn crisis in the years following Endor would be a dream come true for me.

Whatever the plans may be, I think Timothy Zahn is right when he commented on this mention of Thrawn by writing,

“So what will happen next? Your guesses are as good as mine. One thing I do know: Good writers/producers/directors don’t drop a bombshell like that without some kind of follow-up somewhere down the line. I’ll be sitting right there with all the rest of you, eagerly waiting to see how the saga unfolds. Hopefully, it will be artistically done.”

One thought on “With one line, The Mandalorian blew the possibilities for future Star Wars storytelling wide open”