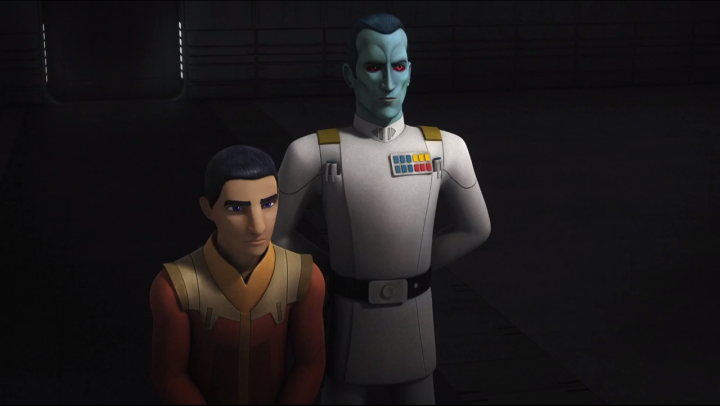 The show concluded with a thrilling ninety-minute finale on Monday night, sending the show out on a high note and explaining the fates of the remaining members of the Ghost crew.

Of course, there’s still some mystery remaining around what exactly happened to some of the characters in the show; so much so that I view the ending of the series as not just a satisfying conclusion to this show but as a possible beginning for future stories to be told.

If you haven’t seen the episodes yet you’re surely wondering what I’m talking about, but before we go on any further, this is your warning that ***major spoilers are ahead.***

As you know if you’re reading this far, the decisive twist in the Battle of Lothal happens as the purrgil arrive with the Ghost as reinforcements, part of Ezra’s backup plan.  The purrgil destroy Thrawn’s fleet and attack the Chimaera, and after a brief battle on the bridge between Ezra and Thrawn, the Imperial Grand Admiral is trapped by the purrgil tentacles.  The purrgil then jump into hyperspace towing the Chimaera, with both Ezra and Thrawn still on board.

The epilogue clearly indicates that Ezra is still alive, as at some point after the Battle of Endor Sabine and Ahsoka set off to find Ezra and bring him home.  But in case there was any doubt that Ezra and Thrawn survived the encounter, Rebels boss Dave Filoni confirmed as much in this week’s episode of Rebels Recon.

“Oh I’ve thought a lot about that, yeah,” Filoni said when asked what happened to them.  “I wonder.  And it’s one of those things where you go, ‘boy, I’d love to do an end credits scene,’ but as tempting as that is, I go, ‘well, if I ever cover that, then I want to do it right.’  And I don’t want to commit to things right now, becasue things might change.  So I have a lot of theories about it and what I think happens and where they are.  I’ll say this much: they’re not dead.  Both of them survive it.  Both Ezra and Thrawn I would say survive it.”

So there you have it: confirmation that Ezra and Thrawn both survive the purrgil hyperspace jump, which was expected and implied but now confirmed.

But how?  Some pointed out that the windows of the Chimaera’s bridge were broken and that the two couldn’t possibly survived a hyperspace jump exposed to open space, and that’s true… but that ignores what Ezra was doing on the bridge.  He positioned himself and was using the force, and there wasn’t really any reason to do so unless he was using the force to keep them alive in a hyperspace jump.  It’s not a stretch to think that’s exactly what he was doing.

This is a tremendous narrative decision by Filoni too, because it keeps two key characters alive for potential stories down the road in a post-ROTJ era while explaining away their absence in the original trilogy.  It always seemed likely that Thrawn would have to be sent to the unknown regions, and that’s seemingly what happened – only it was against his will and wasn’t at the Emperor’s command.

I’d expect that we’ll see future tales about Ezra and Thrawn in a post-ROTJ world at some point, which would be a very cool and good thing.