Star Wars Resistance is back!

The second and final season of the terrific animated show premiered on Sunday, and typically I’ll have these reviews up on Mondays – but this week is an exception. Nonetheless, let’s dive in to the first episode of season two, “Into the Unknown”.

After the events of last season’s epic finale, Commander Pyre and Agent Tierny talk to Captain Phasma via hologram. They inform her that the Resistance has proved to be more difficult than they anticipated, and Phasma counters by saying that the Colossus is a valuable resource to General Organa and that the First Order can’t let her get it. She orders Pyre and Tierny to find it and destroy it – or she will see to their execution personally. After this transmission, Tam arrives on the bridge and talks with Tierny. The First Order agent questions Tam’s loyalties, and upon being assured that Tam wants to be a part of the First Order, Tierny says that she needs Tam to be totally loyal – which includes helping them find her former friends. Tam agrees.

Meanwhile, the Colossus emerges from hyperspace at an unknown location and out of coaxium, which is revealed to not be far away from D’Qar. Kaz assures Yeager and Captain Doza that he’s confident that there is a Resistance base on D’Qar because Leia told him personally, and this is good enough for Yeager. First, however, they have to get the ship operational. Kaz feels responsible, but Doza assures him by reminding him that he isn’t the one who brought the First Order on the station.

Kaz, Torra, Neeku, and CB-23 head down to fix the artificial gravity system and the transmitter relay for the Colossus. They float through the station to get to the lower levels (where the find that the Chelidae have retreated into their shells and thus must be afraid), but the other residents of the Colossus are enjoying their time in Aunt Z’s floating around and partying. As Kaz, Torra, Neeku, and CB-23 get to work fixing things, they send CB-23 to check on something. Lurking in the shadows, however, is the First Order BB droid from the first season… and he sneaks up on CB-23. Before long, Neeku goes to help CB-23, but finds that the droid has been disabled… and he is attacked as well.

So Kaz and Torra go to investigate, presuming that Neeku is trying to do more than they asked him to, but they find Neeku tied up against the wall. The First Order droid reveals himself, and Kaz distracts it while Torra tries to untie Neeku. In reality, however, Torra puts up more of a fight, and Kaz is stunned by the droid. Torra pulls Kaz to safety, but htye soon realize that the First Order droid was just waiting for them to get the communications relay online so that it could transmit a message to the First Order. Doza and Yeager on the bridge see this but can’t stop it, but Kaz does. He pulls the droid away from the socket, while Neeku (still tied up) manages to turn CB-23 back on, sending the droid to help. Just when Kaz is cornered by the First Order BB unit, CB-23 arrives and fights the other droid.

Kaz opens the air lock to suck the First Order droid out, but in the meantime Kaz is nearly sucked out as well, saved only by CB-23. The First Order droid is sent floating off into space, while the Colossus is saved. Still feeling guilty about Tam, however (he even calls Torra “Tam” accidentally), Kaz decides to send a message to her in spite of all the risks.

He transmits the message, but Tam doesn’t even listen to all of it. She throws her personal comlink down on her bed and puts on her First Order TIE Pilot helmet as the episode ends. 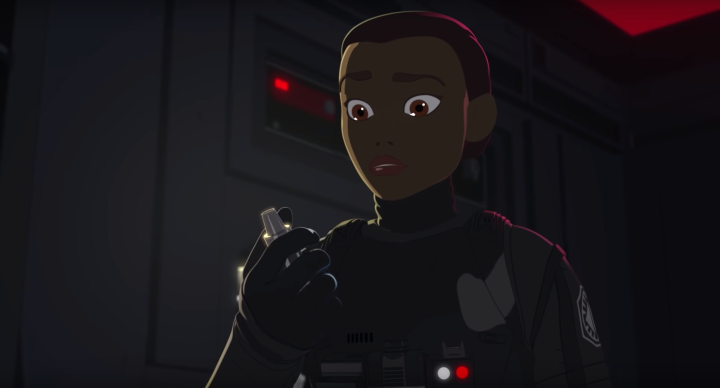 This was a solid episode. It was nothing spectacular, but it was nice and fun in and of itself. I loved how they worked the First Order BB unit into it, as they played up the intrigue and horror of it by slowly introducing him while making it threatening. It has that horror vibe to it, especially as Neeku finds CB-23 and then as Kaz and Torra find Neeku.

Of course, I did find it a bit odd how terrified Kaz got of this First Order BB droid when right before these events he was flying in the Fireball taking on TIE Fighters and an entire force of First Order troopers. He did so confidently and capably… yet now he is scared and can’t handle a single damaged droid? I think part of the intention there is that Kaz is a much better pilot than he is a spy or fighter, and that’s very true. But I guess this ties in to my biggest problem with this episode: it felt like a bit of a let down after the end of season one. I would have thought that season two would open with a bang – maybe not with a huge action sequence, but surely something very significant. After all, where were they going? It turns out… they arrived in the middle of nowhere. And so this story was fairly self-contained within the Colossus itself as they tried to fix it to head to D’Qar. I’m sure that soon enough we will arrive at D’Qar, and that will really set some things in motion as they will surely discover that the Resistance has fled.

So by itself, this was a fun episode, and it had some good moments. Like I already said, I enjoyed how the mystery and horror of this First Order droid slowly and ominously kept building, and I think that was really well done. Also, I thought it was quite funny when Neeku was being all brave in sending CB-23 to save his friends without worrying about him… only to then later add to please come rescue him if they survived. A bit later, after the action, we see Neeku tied up alone in this hallway calling out to see if they won and whether they forgot about him. I thought this was a funny exchange.

Of course, though, perhaps the big narrative driver in this episode was, as expected, Tam. We began the episode with the First Order, and we ended it with the First Order. We didn’t get a whole lot of them in-between, but we are reminded of just how resolute Tam is in her decision. She feels betrayed by her former friends and sees the First Order as just trying to help bring peace tot he galaxy, and she wants to be a pilot for them. She assures Tierny that she will have no problem betraying the location of the Colossus, because the people there aren’t her friends any more. As this transition happens, Commander Pyre then refers to Tam by her stormtrooper number, whereas previously he called her by name. This is a small tidbit, but it says a lot: now that they have recruited Tam to the First Order, she is just a number to them – albeit a number that can help them get what they want. They won’t have to deal with Phasma much longer (as she dies not too long after this), but I wonder if that’s where the clip of Kylo Ren seen in the trailer comes in?

The end of the episode really drives home all of this, as Kaz tries to contact Tam to explain and apologize. He is clearly affected by this all episode, as he feels responsible for what happened to the Colossus and as he decides that contacting Tam’s personal comlink is worth whatever risks come with such a transmission. But we also see Tam’s mindset: she feels betrayed by her former friend, and she doesn’t care to hear any attempt at an explanation. She turns off the comlink without finishing the message and puts on her First Order helmet.

So in all, I thought this was a solid episode. I would have preferred to start of the new season with stronger and more compelling episode building off of the end of last season, but I am sure that is coming. It’s a bit strange that they decided to slow things down for the start of the season, but I expect it to ramp up significantly very soon. But for what this episode was, I thought it was a nice immediate follow-up to the Colossus escaping at the end of last season. It might not be the best way to start a season, but it’s a logical continuation of the story – and that’s ultimately what matters most.