In The Force Awakens, it is revealed that Han Solo lost the Millennium Falcon, his beloved ship, and that he and Chewbacca had been searching for it.

They of course find it, but in doing so they find a whole lot more: they find a look into their past and into their future, as they discover that those who had most recently stolen the ship were carrying a droid vital to the Resistance… and to the location of Han’s dear friend, Luke Skywalker.

Since that conversation in TFA, people have been interested in knowing just how Han lost the Falcon, and how Ducain had stolen it from him.  And we recently got the answer, though it’s surprisingly normal for Star Wars.

In the most recent edition of Star Wars Adventures, issue #18, one of the stories included is “Flight of the Falcon, Part 5: Grand Theft Falcon.”  This continues the Flight of the Falcon series, which has traced the iconic ship on many adventures leading up to its prominence at Galaxy’s Edge.  And in this issue, we are introduced to Ducain and see him steal the ship. 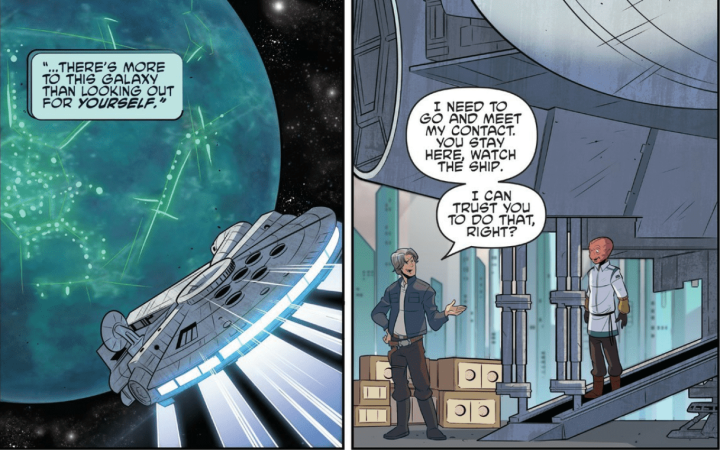 Ducain was a worker at Maz Kanata’s castle on Takodana for as long as he could remember, and he listened to stories of smugglers and pirates and dreamed of having adventures like them.  And one day, he got that chance.  He overheard Han Solo talking with Maz Kanata, explaining that things are more difficult without Chewbacca around.  Maz tells Han that Chewie is with his family and that Han should be with his, but Solo explains that it’s just one mission.  Ducain overhears Han mention that he’s short-handed and volunteers to help.  Maz vouches for him, so Han takes Ducain along as his crew.  Ducain is in awe os being in the legendary Millennium Falcon, and Han explains that he used to be just like Ducain – wanting to make a name for himself – but that he’s learned that the only thing that matters is doing what is right.

Arriving at their destination, Han leaves and trusts the ship with Ducain to watch over it.  Ducain, however, took the opportunity and stole the ship, taking off and flying away in the Falcon.  He traveled across the galaxy, now with the reputation as the guy who stole the Millennium Falcon from Han Solo, and ran guns across the galaxy for his employer while visiting many places (including one that looks a lot like the Canto Bight Casino).  One day, though, he was confronted by his employer, who seemed to be a member of the First Order, and Ducain realized that Han was right: doing what was right is most important.  So he resolved to give the ship back to Solo… only to have it stolen from him by the Irving Boys before he got the chance.

And at the end of the issue, as he gets done telling this story to Bazine Netal, he explains that he’s going to do the right thing and is headed off to join the Resistance.

There you have it: that’s the story of Ducain stealing the Millennium Falcon from Han Solo.  And in many ways, it’s actually pretty refreshing to realize that it’s a quite normal story.  There was no elaborate heist planned, no long-time evil plotting, no fight, nothing.  It was just… normal.  Han hired a guy for his crew, entrusted him to watch over the ship for a moment, and the temptation proved too much for Ducain.  Now, granted, it probably wasn’t the wisest thing for Han to do, trusting his beloved ship to this guy he just met, but perhaps that’s the reason the comic had Maz Kanata vouch for Ducain – to give him at least a bit more credibility in Han’s mind.

So yeah, it probably wasn’t a smart thing for Han to do.  But it’s a normal explanation for what happened.  Han was betrayed by his crew member, who stole the ship from him.  I think it also goes to show how Han was struggling a bit without Chewbacca.  The two pals went their separate ways after the Liberation of Kashyyyk, with Chewie going to live with his family and Han going to live with his.  Maz even tells Han that, imploring him that he should be with his family.  But Han couldn’t help but smuggle, even if it was viewed as a one-time mission.  Either way, though, things were a lot more difficult without Chewie, which I think goes to show you how it wasn’t easy for Han to be away from his longtime friend.

But I also like how the issue shows us that Han taught Ducain a lesson: that it’s not about making a name for yourself but rather doing what is right.  So by the end of the issue, Ducain has realized that Han was right and therefore heads off to join the Resistance.  That part is seemingly set in the post-The Last Jedi world, so it’s just the latest example of people joining the Resistance or being allies to them.  I think that’s a theme we’ll continue to see: that as the Resistance keeps fighting against the First Order, more and more people will join them.  Including, it appears, the guy who once stole the Millennium Falcon from Leia’s husband and Chewie’s best friend, both of whom are with the Resistance.  That might be awkward.