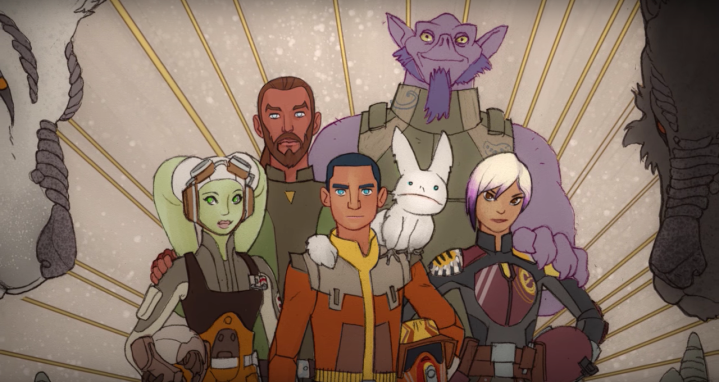 One year ago today, the series finale of Star Wars Rebels aired.

Many people on Twitter have been sharing their favorite memories of the show with the hashtag #RebelsRemembered, and it’s a fitting tribute for a show that became so tremendously good at telling Star Wars stories.

Like with any show that’s worthwhile, Rebels took some time early on to develop its characters and let the audience get to know them – which, of course, meant that some dismissed the show as being childish or boring.  I’ll admit that I didn’t love Ezra early on, as while I liked the others of the Ghost crew I didn’t really like the kid.  But it’s a testament to the show’s writers and creators that, by the end, I had grown to greatly like Ezra as a character, and I even named him the best character of the year from Star Wars in my 2018 end of year awards.

As the show began to get its footing and as the audience began to know the characters, things really began to take off.  The end of the first season and beginning of the second season was a massive turning point, as it was when the show finally seemed to find its footing and become a legitimate force for Star Wars storytelling.  “Fire Across the Galaxy” was terrific, and then it was followed up by the introduction of Darth Vader in “The Siege of Lothal” to begin season two.  Vader was handled absolutely perfectly, and in the midst of that stretch as well Ahsoka Tano was brought back into the fold.

With Tano and Vader immediately bolstering the show’s status, things began to pick up in season two, leading up to perhaps the greatest moment of Star Wars animation ever: Vader versus Ahsoka.  Master versus Apprentice.  In the stunning “Twilight of the Apprentice,” that duel takes center stage, and it planted threads that would be picked up on late in the series.  But that episode also gave us a defining moment, one that tied together The Clone Wars and Rebels in such an inextricable way that it now seems impossible to truly know The Clone Wars without seeing the continuing stories of Ahsoka, and likewise it seems impossible to truly understand the intricacies of Rebels without seeing The Clone Wars.  They became tied together with this beautiful, brilliant, breathtaking moment.

But that also introduced Maul into the fray, dealing a blinding blow to Kanan Jarrus and reminding us of this one hard truth: since we knew none of these characters before, they all could die before the series ended.  Maul tempts Ezra while the Phoenix Squadron gets more involved with the larger Rebellion, and we get some tremendous moments from season three as well.  We see the beginning of the Rebellion with Mon Mothma; we see Obi-Wan Kenobi face off against Maul one last time; we see Sabine train with the Darksaber.  And, of course, we get the introduction of a fan favorite: Thrawn.  The character who had been so influential in the Expanded Universe was brought back in a dramatic reveal in the season three trailer at Celebration, and he became the primary antagonist for the final two seasons.

The fourth season really shifts the attention to Lothal and to the Ghost crew, and rightly so.  As it does so, we come to see so many truly amazing moments.  Hera leads the Rebellion in an attack on the planet, but she is captured… leaving Kanan (aka Caleb Dume) to rescue her.  He sacrifices his life to save the others, and Ezra picks up the mantle and continues the mission.  He ventures into the stunning world between worlds, where he’s again faced with Kanan’s death, where he reunites with Ahsoka, and where he encounters Emperor Palpatine.  Eventually, Ezra leads his friends in an attack on the city, liberating Lothal and taking Grand Admiral Thrawn and the Chimaera into hyperspace with him to some yet unknown location.  The epilogue then gives the show a truly satisfying ending – while leaving the door wide open for future stories yet to be told.

All in all, Star Wars Rebels is about as good as it gets.  It has tremendous characters, a ton of heart, breathtakingly emotional and exciting scenes, great action, and a terrific score by Kevin Kiner.  The story that Dave Filoni and company weaved together through the four season run is tremendous, and I strongly encourage anyone who hasn’t yet given the show a chance to watch it.  You won’t be disappointed.