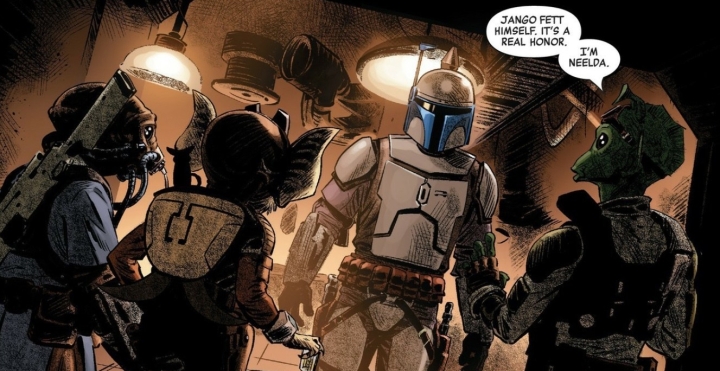 I have really enjoyed the Age of Republic comics so far, written by Jody Houser, and each issue focuses on a hero or villain from the prequels.  The most recent issue, which was the fourth overall, tells a story about the infamous bounty hunter Jango Fett.

This issue tells of a mission Jango Fett takes sometime prior to Attack of the Clones, and it shows us both a flashback of him being hired by Darth Tyranus and a current picture of him working with his son, Boba.

The issue begins with some bounty hunters (Neelda, Tiver, and Rinn) who have been hired for a job by Jango Fett, and as they sit in a cantina waiting for him, they wonder why he’d even take this job since the rumors are that he reached a very sweet deal with a mystery client.  When Jango shows up, he informs the others that his son Boba will be helping them on the job as part of his training.  While they’re flying Slave I later, Boba expresses frustration with working with this crew, asking his father why they aren’t working with Cad Bane or Aurra Sing or Zam Wesell.  Jango explains that the reason is because they know those people and how they work, whereas they don’t know the same about these bounty hunters.

Boba realizes that his father can now just take the jobs he wants, so he doesn’t get why Jango took this one.  Jango explains to his son that it took a lot of time and work to get to that place, earning his reputation.  We then get a flashback to “The Moons of Bogden” “some time ago,” where Jango Fett meets with a cloaked figure.  The figure (soon shown to be Darth Tyranus) offers a lucrative package to Jango Fett in exchange for complete access to his genetic template.  Tyranus says that Jango will be expected to reside on Kamino when he’s not taking other jobs, but that the pay should be enough for him to retire if he wishes.  Tyranus tells him that the reason Jango is the bounty hunter desired is because of his reputation, skills, and discretion – and Jango also adds in the fact that he’s a human.  Tyranus explains that the desired result is a Grand Army of the Republic, and Jango agrees – with one additional condition regarding compensation.

The comic then cuts back to the current day, on Ord Mantell, where a couple in love secretly meets.  The girl’s father wants her back, and that’s why Jango’s crew shows up to retrieve her.  She refuses to go with, and she accidentally falls off the balcony… only to be caught by Jango Fett flying through the air, revealing that he knew it was a possibility she would fall and he had to account for that.  After the fact, two members of Jango’s crew – Tiver and Rinn – jump Boba and threaten to kill him unless Jango gives them the girl and his ship.  There is then another brief flashback, of Jango watching the young clone cadets (including a young Boba) on Kamino.  Back in present time, Jango says he won’t give up the girl to save his son, which surprises the bounty hunters long enough for Boba to get the upper hand.  Boba kills Tiver and Rinn, but Jango leaves the decision on whether or not to kill Neelda up to his son.  Boba decides that Neelda should forfeit his share of the bounty (since he didn’t do much to stop the others) but can escape with his life (since he wasn’t in on the rebellion).  Later, Boba tells his father that part of his reasoning for letting Neelda go was also so that word of what happened could spread, as the young Boba Fett begins to earn his own reputation in the galaxy. 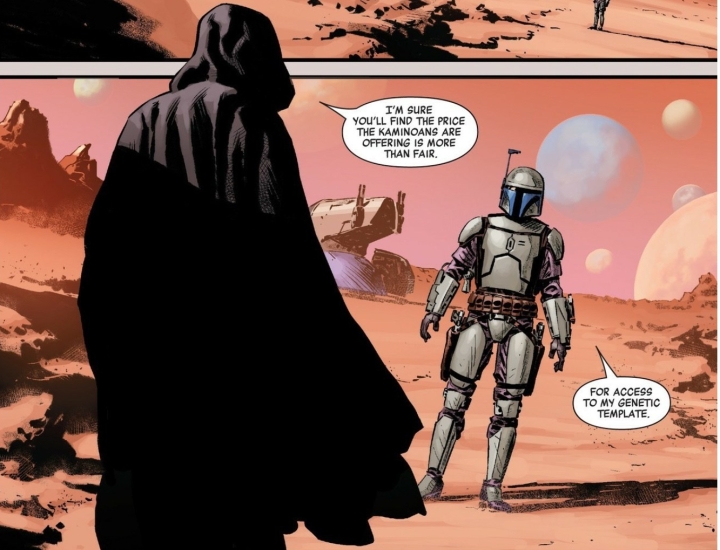 I like Jango Fett and think that we need more stories about him, so I really enjoyed this comic.  There wasn’t anything really in terms of huge revelations, but there were some significant and enjoyable moments.  Primarily, the two main things of note in this comic were relative to the cloning program and Boba Fett.

We obviously know from Attack of the Clones many of the basic details: Jango Fett reveals that he was approached by a man named Tyranus on one of the moons of Bogden to become the genetic template for this army of Clone Troopers, making up the Grand Army of the Republic.  In this issue, we got a chance to see that conversation with Tyranus.  The reason Tyranus (whom many Star Wars fans probably know as Count Dooku) wants Jango Fett for the job is because of his reputation (a notable theme in this issue), his skills and discretion, and it seems also because he is a human (that is Jango’s reasoning, at least).  Additionally, while Tyranus doesn’t appear to tell Jango the whole plan, he does tell him a significant amount: this is for a Grand Army of the Republic.  There’s no mention of the ultimate, far more nefarious, purpose for this army, but I wonder whether Jango ever began to wonder about whether there was more.  But as a bounty hunter, I’m sure he was fine with whatever so long as he was getting paid.  And it’s clear in this issue that the pay Jango received from this deal with Tyranus was sizable, enough for him to retire comfortably to Kamino.

That seems to be something that has been added to his reputation around the galaxy, too, as these three bounty hunters joining Jango Fett on this mission talk about how the rumors are that Jango doesn’t need to take these jobs any more.  So it sounds like Jango Fett simply takes the opportunities he wants to take now, which includes this one and then later one to assassinate Senator Amidala (working with Zam Wesell).  Throughout the issue, I wondered whether some of his reasons for continuing to take these jobs were at least in part because he wanted to train his son and because he was a bit uncomfortable with the cloning stuff.  In another flashback, he is seen with the Kaminoans looking over a batch of Clones, and Jango says, “What do I have to be proud of?  Livestock bred as cannon fodder?  Like you said, they’re your creations.”  He doesn’t seem to have an intimate involvement or responsibility with these clones.

It’s also cool to see more of Boba Fett, as we know he would one day become the galaxy’s most feared bounty hunter, just like his father had been before him.  In this comic, we see one of Boba’s earlier missions, as he’s just beginning to get the hang of this bounty hunter thing, learning from his father.  Boba shows that he is quite capable in escaping from Tiver and Rinn and then killing them, but he also learns a lesson about letting his guard down.  We already see in this issue that Boba possesses some of the same skills, discretion, and attitude that his father does, and that leads to him beginning to get a reputation.  That will eventually lead to him doing more bounty hunter work during The Clone Wars, and then by the time of the Galactic Civil War he is the most feared and notorious of all the bounty hunters in the galaxy.