Charles Soule’s terrific Darth Vader comic, “Darth Vader: Dark Lord of the Sith,” will be wrapping up on December 19 with the final issue, #25.

It has been a terrific ride so far with plenty more left to be revealed, I’m sure, and in the penultimate issue, #24, we see Sith vs. Sith in a battle to the death!

As we saw in the previous issue, Momin finally created the correct and working version of Vader’s castle, but as Vader leaves to deal with an uprising of the Mustafarians, Momin reincarnates himself and is fully back, having deceived Vader about his ability to use the Force.  This issue picks up with Vader battling the Mustafarians, and it’s quite epic.  The stormtrooper forces guarding the castle are being overrun and begin calling for an evacuation, but Vader lands on the ground and says, “This is Vader.  Belay that order.  There will be no evacuation.  There will be no retreat.  You will destroy the attackers.  You will teach them the meaning of the Empire.  Here.  I will show you how.”  Vader says this as he fights off Mustafarians and then charges into battle, lightsaber ignited, and the stormtroopers rally behind him.  “For Vader!” one trooper cries out, while another shouts, “For the Empire!” and they charge into combat after their leader.  The Mustafarians, however, seem to have some sort of control over the Force, and they use it to cause the lava to wash over the Imperial forces.  Vader uses the Force to save himself, but he is damaged – leaving him laying on the side of the lava river, reminiscent of ROTS.  Vader enters his castle as the Mustafarians charge it, but Vader uses the Force to kill them all with lava.

The Sith Lord is finally at peace… or not.  Momin then confronts Vader, drawing his twin red lightsabers, taunting him about how he still believes he’s the chosen one and that he possesses such power over the Force, which if true, then why is his wife dead?  This angers Vader, but Momin continues: “The dark side does not serve us.  We serve the dark side.”  He duels Vader with lightsabers briefly before cutting off Vader’s arm.  He tells Vader that, “You have been poorly taught about what the dark side is and why we must serve.  Your master is either ignorant or hoarding knowledge.  It saddens me to see the Sith become such Jedi-obsessed weaklings.  It saddens me, and I know it disgusts the dark side.”  Vader catches Momin off-guard, however, hurling a giant stone at him and pinning him against the wall.  As it begins to crush Momin, he insists that the dark side wants him to live, and Vader replies, “If that is true, Momin… then you will” as he crushes Momin to death with the stone through the Force.  “My destiny… is my own,” Vader mutters as he opens the castle, peering into the realm teased in the previous issue. 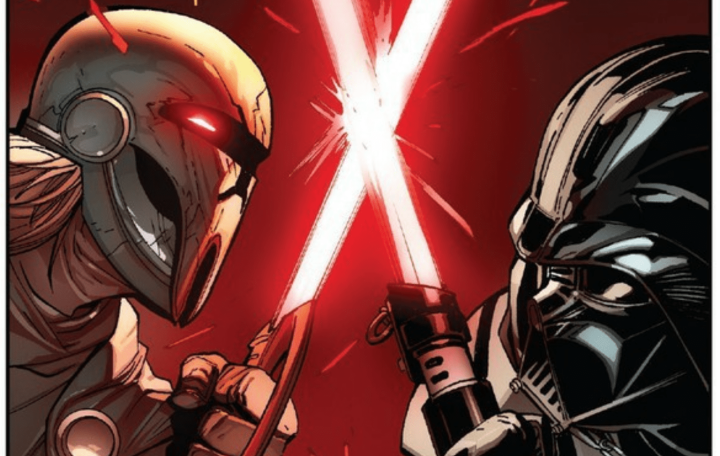 I am glad that we’re going to get an entire issue, it seems, with Vader exploring the secrets of the castle, since he already dealt with Momin.  And from a fan-loving perspective, seeing two Sith battle against one another is pretty cool – especially since they seem to have dueling philosophies regarding the Force.  Momin says that Vader thinks that the dark side serves him, as he is the chosen one and uses the Force as his instrument, but Momin thinks that they serve the dark side, doing the will of the Force.  He claims that the reason he has lasted and is still alive is because the dark side loves him and because he is such a faithful servant of it, while he chastises Vader for the Sith’s obsession with the Jedi.

Ultimately, Vader wins.  That’s no surprise, though Momin was able to cut off the Sith Lord’s arm in the process.  Momin is dead (and it seems it’s for real this time), and Vader lives on.  But was Momin right about the Sith?  It seems that there may be a hint of truth in what he had to say.  Obviously, it doesn’t seem like the Force wanted Momin to stay alive like he alleged, and Vader even taunts him a bit over that.  But I do think that Momin has a point about the Sith.  The Sith had become so totally obsessed with the Jedi, and this was especially true of Vader, who had been tasked with hunting down and destroying any remaining Jedi.  The Jedi, when they were in power, had been incredibly wary of the Sith ever rising again that they stayed totally away from the dark side whatsoever; but the Sith, now that they were in power, have become almost over-obsessed with the Jedi and eradicating the light side of the Force.  So in other words, none of them seem ultimately about the Force but about using it as their instrument and weapon, which isn’t proper or right.  And Momin is also probably right that the Emperor is hiding knowledge (as I doubt he’s just ignorant), and I’m sure that Vader suspects as much too.

So yes, it seems that there’s a hint of truth in what Momin has to say, though he’s obviously not totally correct, and he’s passed off as a radical for the Sith – meaning that other Sith likely don’t think the same way he does.

It was cool to see this conflict resolved, and now I can’t wait to discover what Vader finds in the secrets of his castle in the final issue of this thrilling series!