This past weekend marked the 40th anniversary of the one piece of Star Wars above all else that George Lucas would like for you to forget.

The Star Wars Holiday Special premiered on November 17, 1978, airing on CBS – and never airing again.  The special has been almost universally panned by critics and fans alike, a jumbled mess that amounted to a crazy program.

The idea behind the Holiday Special was to fill in some of the time in-between A New Hope (1977) and The Empire Strikes Back (1980) while seizing on the popularity of Star Wars.  Lucas wasn’t as involved with the project as he probably wished he had been, but Harrison Ford, Mark Hamill, Carrie Fisher, Peter Mayhew, Anthony Daniels, and James Earl Jones were among those to return for the special (and it marked the first time that Jones was officially credited on-screen as the voice of Darth Vader).  It also starred other celebrities such as Art Carney, Harvey Korman, Bea Arthur, and Diahann Carroll, and it wound up being a variety show-like special, directed by Steve Binder (who joined production after the show’s original director left).

To be entirely honest, the premise of the Holiday Special wasn’t actually bad: Han Solo and Chewbacca try to escape the Empire so that Chewbacca can get home to his family on Kashyyyk for Life Day.  That plot line could certainly have worked, but the execution of pretty much everything was, well, miserable.

It wound up being a jumbled mess of a little bit of everything.  There were musical numbers (including one by Carrie Fisher), there were strange segments and sequences, there were actors who appeared to be disinterested, there was footage spliced from A New Hope mixed in with new stuff, and there was plenty of Shyriiwook.  The special gave us our first look at Kashyyyk and more Wookiees, but in doing so it meant that there were very long segments of the show that featured nothing but Wookiees talking to each other in Shyriiwook, their own language, which the audience obviously can’t understand.  This left large segments in which the audience had no idea what was being said, with only a few key points in which another character interpreted for us.

In the end, the Holiday Special has been aired exactly one time – on that November 17, 1978 night by CBS – and Lucasfilm has keep it safely locked up ever since.  George Lucas famously hated the special, and once said, “If I had the time and a sledgehammer, I would track down every bootlegged copy of that program and smash it.”  There are, indeed, plenty of bootlegged copies out there on Youtube for you to watch, if you wish.  Harrison Ford was once asked if we’d ever see another Holiday Special, to which he replied, “Not if I have anything to say about it!  And if I have anything to say about it, you won’t see the first one.  What an embarrassment.”  Carrie Fisher said, “It’s awful … not awful in a good way,” and she apparently once asked Lucas for a copy so that she’d have something to show guests when she wanted to get them to leave a party.  And just this past weekend, Mark Hamill tweeted that he’s never seen the special all the way through.  When Anthony Daniels was asked about it, he said, “It was an extraordinarily bad experience.  Do you know some things [that] are so bad they become good?  This was so bad, it can’t.  It’s truly bad.”

There are still some who will defend the Holiday Special, and it’s true that the negative vibe about the film has almost (almost) exceeded the strangeness of it, but it’s nonetheless a chapter of the Star Wars legacy that has been mocked and which George Lucas hates.  But even in a bad experience and situation like the Star Wars Holiday Special, there were a few things about it that became our first look at something later re-established in the Star Wars canon.

I have yet to mention the cartoon segment of the Star Wars Holiday Special, which is almost universally agreed upon as easily the best part.  The cartoon is something that Lumpy (Chewbacca’s son) watches while the Imperials search his home, and it tells a story of Luke Skywalker setting out to find the Millennium Falcon and Han and Chewie.  In the process, he meets a bounty hunter named Boba Fett, who works with Luke and Chewie to get an antidote that would help Han.  Boba Fett appears friendly, but is actually working with Darth Vader, which the heroes discover at the end as Boba escapes.

The cartoon serves as the very first introduction of the now-iconic bounty hunter, as Boba Fett appeared in The Empire Strikes Back and Return of the Jedi before appearing in the prequels and The Clone Wars as a young boy.  Plenty of stories have been told about the bounty hunter in Star Wars since his introduction in ESB, but his first on-screen appearance was actually in this cartoon.  It is almost certainly the most memorable and important part of the Holiday Special. 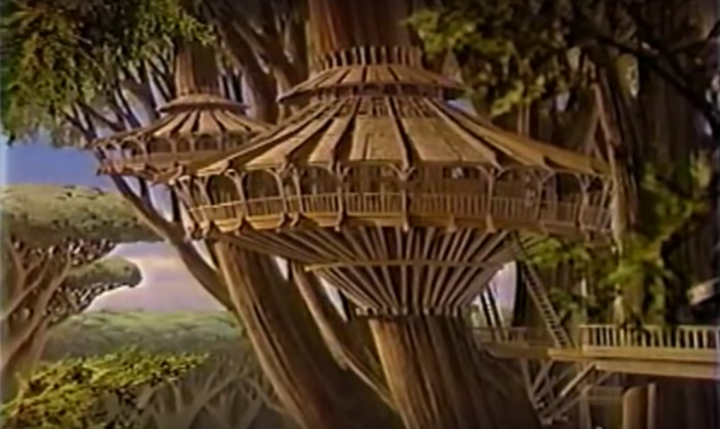 The Holiday Special also gave us our first look at Kashyyyk, the homeworld of the Wookiees.  George Lucas later gave us a much better look at the planet in Revenge of the Sith, where a major battle near the end of The Clone Wars took place.  Grand Master Yoda took his clone forces to the planet to fight alongside the Wookiees (including Chewbacca) in repelling the droid army.  So we knew about the planet for a long time before Lucas actually brought it into one of his films, and the Holiday Special was technically the first time we saw the planet.

Some of the main characters introduced in the Holiday Special were Chewbacca’s family members: his father Attichitcuk (“Itchy”), his wife Mallatobuck (“Malla”), and his son Lumpawaroo (“Lumpy”).  They are very prominent characters in the special, but they have been brought back and made canon in the new Star Wars canon.  So it is entirely accurate to still say that Chewie’s father was Itchy, his wife was Malla, and his son was Lumpy.  That’s all still true – and the Holiday Special not only gave us our first introduction to them but still their only appearances on-screen.