On Twitter, Bryan Young recently asked his followers what their favorite moment of the modern Star Wars era (the Disney era) is, and there are too many great ones to count.  Inspired by that, we’ll be taking a look at this author’s top 50 moments from recent Star Wars material.  Today, we look at numbers 16-20.

20. Trials of the Darksaber 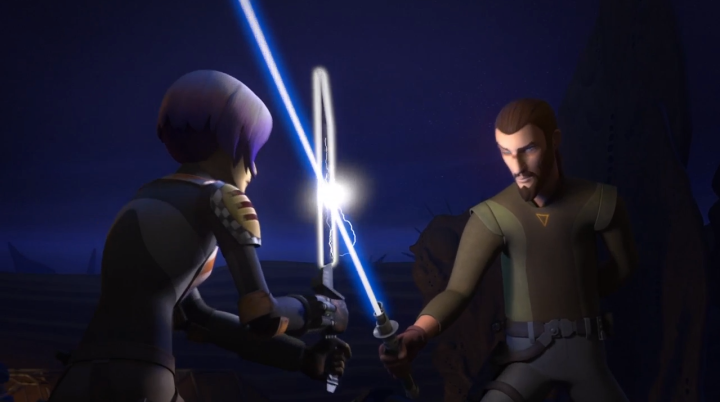 For as influential as lightsabers are in the Star Wars universe, we surprisingly haven’t seen a ton of focus on lightsaber instruction.  We’ve seen a lot of training in the force, but not necessarily in lightsaber combat.  But in this episode of Rebels, the plot entirely revolves around Sabine learning how to fight with the darksaber – while confronting the ghosts from her past.  The emotion shown from Sabine is raw and real, the lightsaber training with Kanan Jarrus is phenomenal, and the musical score by Kevin Kiner is perfect.  The episode really dives into Sabine’s backstory to reveal why she’s so hesitant to wield the darksaber, and the episode also shows Kanan’s reluctant willingness to train her with the weapon.  It adds up to one of the very best episodes Star Wars animation has ever done, and it deserves a place among the best Star Wars storytelling.

The Rebel fleet arrives above Scarif (Rogue One: A Star Wars Story)

After the Rebel council deems an attack on the Imperial base at Scarif too risky, Jyn Erso and Cassian Andor lead a strike force to the surface to infiltrate the base and steal the Death Star plans – assuming that they are all alone.  However, when word reaches Mon Mothma of this strike force – called Rogue One – she mobilizes the fleet and sends it to Scarif to reinforce, led by Admiral Raddus.  The arrival of the fleet is a purely great moment, and it comes as a surprise to Rogue One.  The space battle that ensues is Star Wars at its most fun, featuring tracking shots and awesome space dogfighting action accompanied by plenty of heart and drama and desperation.  This is the Rebellion fighting for their lives before they’ve really had much of a chance to do any damage, hoping to steal the Death Star plans against the near insurmountable odds of an Imperial fleet.  The Rogue One strike force isn’t alone, however, as the Rebel fleet shows up to help turn the tide of the battle and give hope to the striving Rebellion.

When it comes to making a movie which features the death of one of the most famous and beloved characters in film history, it must be done well.  That’s what happened in The Force Awakens, when Han Solo is killed by his own son.  A few years before the events of the movie, Ben Solo had rebelled and turned to the dark side of the force, aligning with Supreme Leader Snoke of the First Order.  The ripple effects of that shattered Han’s family, as he lost his son and separated from his wife.  He went back to smuggling (with his best friend Chewbacca faithfully by his side) with middling results, only to be drawn back into the fight when Rey, Finn, and BB-8 show up with a possible map to Luke Skywalker, Han’s brother-in-law and dear friend.  Han reunites with Leia, and she encourages him that he can bring his son back (“Luke is a Jedi; you’re his father”) and encourages Han to bring their son home.  So, when undercover on Starkiller Base planting the charges that would ultimately lead to the weapon’s demise, Han sees Ben, his son, and goes after him.  Han got his last name because he had no family, but he spends his last breath trying to restore his family.  Han was a self-centered person in it for the money in A New Hope, but his final heroic acts were in the interests of the Resistance, the galaxy, and his son.  Ben, clearly struggling with the inner tension, ultimately drives his lightsaber through his father’s gut, killing the legendary Han Solo.  His last act was trying to restore the family he cared so much about – because, as Qi’ra says, he really is the good guy.

17. A World Between Worlds Ezra delves deeper into the Force (Rebels Season 4, Episode 13: “A World Between Worlds”)

In one of the most stunning episodes of Star Wars animation ever done, Ezra Bridger journeys into a mystical ‘world between worlds,’ a pathway between eras with all sorts of inter-connected points with the Force.  As he journeys into this void, the voices from so many eras of Star Wars ring out in what amounts to a giddy experience for the viewers: there are the voices of Yoda, Obi-Wan Kenobi, Qui-Gon Jinn, Rey, Kylo Ren, Leia Organa, Jyn Erso, Maz Kanata, Chirrut Imwe, and others ringing out in this vast, empty expanse.  Ezra eventually winds up at a portal that shows him the fate of Ahsoka Tano from the season two episode “Twilight of the Apprentice” – only, as she’s about to be killed by Darth Vader, Ezra reaches into time and pulls her out, rescuing her.  That leads him to think he can rescue his master, Kanan Jarrus, who had recently died as well – but Ahsoka reminds him that he can’t change that without changing their fates as well.  Ultimately, Sheev Palpatine (voiced by Ian McDiarmid!!) appears in one of the portals attempting to use Ezra to gain access to this all-powerful Force realm, and Ezra and Ahsoka escape Palpatine and destroy the access point to the world between worlds.  It’s a breathtaking episode that encompasses all eras of Star Wars, greatly expands our knowledge of the Force, contains plenty of emotion, answers a huge question about a fan favorite, and features the return of McDiarmid as Palpatine – simply put, it’s fantastic.

Since their initial ten years prior to the Battle of Yavin (as shown in Solo), Han Solo and Chewbacca were inseparable best friends for fifteen years.  Where one went, the other was sure to follow.  They flew together on the Millennium Falcon, they smuggled together, and they fought in the Galactic Civil War together as heroes.  And, in the year following the Battle of Endor, they fought to liberate Kashyyyk together.  It wasn’t a sanctioned mission by the New Republic, so General Solo resigned his commission so that he could aid Chewie in freeing the Wookiee’s homeworld.  They ran into complications (that involved Han dropping off the map and Chewie being imprisoned), but with the aid of friends and with the timely arrival of Leia Organa (piloting the Falcon), Wedge Antilles, and Gial Ackbar arriving with a fleet (against the New Republic’s wishes), Solo and Chewbacca led a successful liberation of Kashyyyk.  But as Han readied to leave the planet, he said goodbye to his best friend: “No.  No!  You have to stay her.  We fought like hell for this and now… this is yours.  Okay?  All yours.  This is home.  You got people here and I want you to find them.  You hear me?  That’s my last demand.  No arguments. …  I said no arguments.  You be with your family.  I have to go start mine.”  Saying goodbye proves harder than Han thought, and after a hug Han tells Chewie: “I’ll be back.  We’re not done, you and I.  We’ll see each other again.  I’m gonna be a father and no way my kid won’t have you in his life.”  After Chewie mutters something and pats Han’s head, Solo says, “Yeah, pal.  I know.  I love you too.”  We know, of course, that Han and Chewie kept up their relationship over the years, and once Han’s family fell apart his best friend came back to be with him, but it’s a truly emotional and touching moment.  Han says goodbye to Chewie, knowing that the two of them are both moving on to their own respective families – even though, in reality, the two of them are family.