Star Wars Rebels returned this week with the fifth and sixth episodes of its fourth and final season, titled “The Occupation” and “Flight of the Defender.”

As they’ve done each week to start the season so far, two new episodes premiered at the same time, and even though these two don’t share the same title they clearly go together.  That’s one thing that I’ve been impressed with so far this season: it doesn’t feel nearly as disjointed as episodes in past seasons have, but rather feels like we’re zeroing in on one main storyline.  Dave Filoni did say earlier that this season will be more serialized, and we’ve been noticing that already – which I think has made the episodes much stronger.

Since these two episodes are a bit more distinct from each other than “Heroes of Mandalore” and “In the Name of the Rebellion,” however, we’ll be reviewing each one of them individually.  Click here for the review of “The Occupation,” and now we’ll look at “Flight of the Defender.”  Full spoilers are ahead, so if you haven’t seen it yet, don’t read any further.

With the Ghost crew now on Lothal, they set their sights on their primary mission: finding out more about the TIE Defenders.  Ezra, Sabine, Zeb, and Ryder go to secretly spy on and scope out the Defender, which is just returning from a test flight piloted by Vult Skerris.  That’s confirmation for the rebels, but Sabine realizes that they need more, like the flight data recorder from inside the ship that contains the information needed about the Defender.  So she and Ezra sneak closer, with Sabine winding up inside the Defender.  At the same time, however, an Imperial Shuttle arrives with Grand Admiral Thrawn, Governor Pryce, and Deathtroopers, with Thrawn wanting an update from Skerris regarding the fighter.  Sabine tells Ezra to create a distraction, and as he’s trying to determine what to do he’s caught by a TIE Pilot, leading to Ezra jumping all over the place and making his way around the base, drawing the attention of the Imperials.  The Deathtroopers move to guard the Defender, however, so Sabine winds up taking off in it, picking up Ezra and destroying much of the base in the process.  Thrawn draws his blaster and fires at the Defender, but to no avail.  He does decide, however, that it’s the perfect test for the ship in combat, sending TIE Fighters after it.  Sabine gets to work trying to disable the tracking mechanism, while Ezra pilots the ship and eventually takes out the other fighters.  Thrawn notes that it must have been Ezra and Sabine in the ship (noting that if it were Captain Syndulla the TIEs would have been destroyed much faster), and concludes that if Ezra could best TIE Fighters in the ship then the Defender must be impressive.  He then gives the order for the kill switch to be activated, but Sabine figures it out in enough time to warn Ezra.  The wings of the ship fall off, but Ezra and Sabine survive the crash.  Armed with the data recorder and the ship’s hyperdrive they take off on the run, knowing that the Imperial search party won’t be far behind.  They hide the hyperdrive in a cave and attempt to hide from the Imperials, when Ezra once again sees a Loth-wolf – which supposedly hasn’t been seen in over 100 years.  The wolf approaches them and says, “Sleep” to Sabine, breathing on her and causing her to fall into a deep sleep.  Ezra befriends the wolf, however, and the wolf carries Ezra, Sabine, and the data recorder back to the rebels’ base.  No one else saw the wolf, but when Ezra asked it why it was helping them, it said, “Dume.”  Then at the end of the episode, the wolf is shown watching them from a distance, looking relieved that they’re ok. 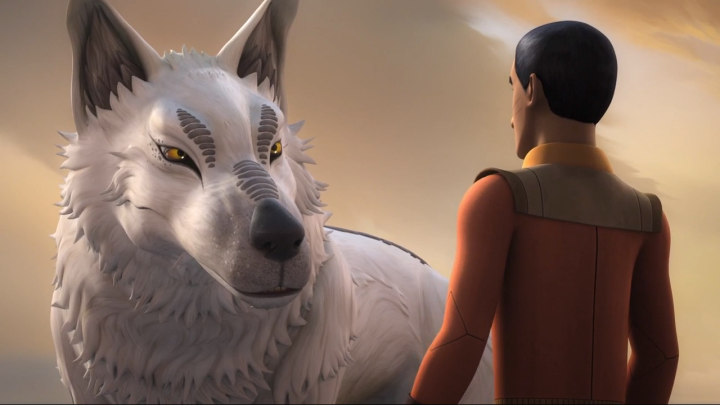 This episode was terrific throughout.  There was significant tension in the episode as Ezra and Sabine attempted to steal information about the TIE Defender (and then the Defender itself) right out from underneath Thrawn’s watch.  As I mentioned last week, the show seems at its strongest when pairing Ezra and Sabine together, and this time was no exception.  The two are great together and play off of each other well.

Additionally, Thrawn was terrific in this episode.  He’s there to inspect his prize project, but he winds up being in the middle of the rebel’s infiltration.  At one point, Ezra (as he’s making his way around fighting off troopers and causing a distraction) falls and looks up and sees Thrawn not far away, leading to one of the best moments of the episode: Ezra looks up and sheepishly grins as he waves and says “Hey” to Thrawn, who calmly responds, “Fascinating.”  That interaction perfectly nailed both characters’ personalities.  A bit later, Thrawn pulled his blaster and fired at the Defender even while Skerris and Pryce recoiled in fear and warned him to get away.  It might be stupid for Thrawn to attempt that knowing it probably won’t work, but it showed his calm fearlessness (he was once a great warrior, after all).  Furthermore, Thrawn deciding to use the theft of the ship as a test for its’ battle-readiness was brilliant, as were his comments deducing who was flying the ship and his conclusion that if Ezra were able to hold of TIEs then the ship must be good.  It was also nice seeing Ezra’s reaction when he realized it was Thrawn who had arrived, as it’s clear that Thrawn’s attack still scars the rebels and they’re scared of him, knowing he presents a daunting threat.

The TIE Defender is also one heck of a ship, equipped with shields and a hyperdrive as well as tremendous speed and battle capability.  It will be interesting to see how the show explains why it wasn’t mass-produced, as the ship certainly looks quite daunting in the show so far.  Perhaps politics will come into play, as we saw in the trailer Tarkin telling Thrawn that the Defender was at risk because of Krennic’s Stardust program (whcih we know gets finished).

Of course, much of the talk and speculation about the episode will be surrounding the Loth-wolf.  This episode once again played up Ezra’s connection with animals (both with Loth-cats and the Loth-wolf), and it was very interesting that the wolf appeared to be able to use the force at least somewhat when it said “sleep” to put Sabine to sleep.  And then particularly interesting was the wolf’s other comment, after Ezra asked why it was helping: “Dume.”  I’d guess that it’s a play on words with a dual meaning, incorporating a pending threat of “doom.”  But it seems that the wolf was saying “Dume,” which of course is Kanan’s last name, Caleb Dume.  So does the wolf want Kanan?  Is Kanan the one whose future includes doom?  And who is the wolf?  It seemed that the wolf didn’t care for the Empire, and it seemed that the wolf was genuinely relieved to see the rebels make it and survive.  That, coupled with the fact that it appeared to use the force and appeared to know Kanan’s last name, makes people think that the wolf is not just some random creature.  Is it the Bendu?  Is it Ahsoka?  It will be interesting to see what happens with the wolf moving forward.

Overall, this episode was fantastic.  There was great action, great visuals, tension throughout, Ezra and Sabine taking center-stage again, the TIE Defender, Grand Admiral Thrawn, and the mystery surrounding the Loth-wolf.  It was fun and incredibly well-done.