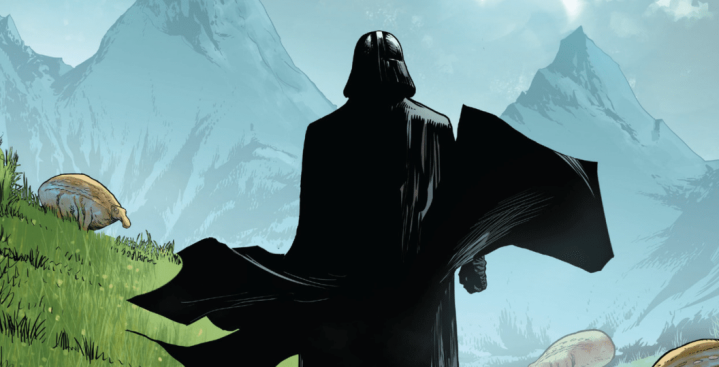 The comic industry experienced quite a bit of delays over the last several months due to COVID-19, but on Wednesday the current Darth Vader Marvel series resumed, with issue #3 dropping.

The first three issues of the series focus on Vader trying to find out more about his son, Luke Skywalker, and how his birth was covered up. This leads Vader to investigating the circumstances surrounding Padmé Amidala’s death, which leads him to discover Sabé, the Queen’s Shadow, handmaiden to Queen Amidala. Sabé joins up with Vader once she realizes that both of them want answers into Padmé’s death, and this leads them back to Naboo, where the third issue picks up.

And the issue is a real treat for prequel fans, that’s for sure!

[Spoilers are ahead for Star Wars: Darth Vader #3!]

Having arrived on Naboo, Vader continues to have flashbacks to his former life with Padmé, and he heads off with Sabé to the Naberrie Lake Retreat house. Upon entering, Vader is attacked by Captain Gregar Typho and Captain Tonra, who presumed that Sabé was in trouble. Before Vader could kill them, however, the Queen’s handmaiden calmed the tensions down. She told Vader that she had given the security recordings from Padmé’s apartment to the two men, so they were necessary to keep alive.

Typho and Tonra lead Vader and Sabé beneath the house to a sub, all the while discussing their time with Padmé. Typho mentions that assasination attempts were thwarted by Cordé (who died the day of the assassination plot) and Jedi Anakin Skywalker (who died a few years later). Typho tells Vader that the last time he saw Padmé was after the clones burned the Jedi Temple, as Padmé insisted on going to Mustafar alone on a personal mission. He expresses regret that he let her do so.

As the crew travels in the underwater sub, they are attacked by a Colo Claw Fish, which irreparably damages the vehicle. They are left without a vehicle underwater, helplessly trapped, until Vader ignites his lightsaber and fights off the beast. The team manages to make it by swimming to a nearby underwater Gungan bubble.

Once inside, they see that a shrine has been constructed to honor Padmé’s efforts in uniting the Naboo and the Gungans. A little further in, the security recordings are finally retrieved. Vader’s droid accesses it, but it turns out that the recordings are simply Sabé uniting a team called the “Amidalans”, pledging to find and kill whoever murdered the Queen. Both Tonra and Typho are among those in the video, from many years earlier, taking the pledge. Vader insists on knowing what the deal is, and that’s when the others come clean. The group had connected the dots. Typho had last seen Padmé heading off to find Anakin Skywalker on Mustafar, and the group had later learned that Mustafar was Vader’s domain. “You killed them, didn’t you?” they demand of Vader. He pauses, and then ignites his lightsaber, saying, “Of course I did.” This causes the others to spring into action, and Tonra triggers a signal that calls the Colo Claw Fish, heading directly toward the Gungan bubble, while Sabé says, “For Padmé… and for Anakin.”

Like I mentioned earlier, this issue is a real thrill for prequel fans, because there is SO MUCH that is interconnected in here.

The numerous prequel connections are incredibly cool, and I’m loving seeing Vader and Sabé return to familiar locations in search of answers about Padmé’s death. Of course we know what happened to her, but these characters don’t have all of the details in-universe. At first I wasn’t sure how this story would go, since there’s been other Vader comic series and since the whole “Vader tries to deal with not having Padmé” thing has been a bit overdone in recent years. But I’ll just say that this is the issue that really sold me on this thing maybe working. The first two issues were good, but this is the one that really helped bring things together. I love the mystery feel of it (even though we know the answers), I love the team-up of these characters, and I love all the prequel nods.

But in addition to all of that, it actually feels pretty natural. You would think that Vader would’ve done some research into Padmé’s death much earlier than this, but it actually is quite reasonable that it wouldn’t have been THE top priority for him until he discovered that he had a son and wanted to know more about how this happened. How did Padmé give birth before she died? How did this fact get hidden from him? It seems that he always suspected there was more at play in Padmé’s death, but he never had the compelling reason to push him into investigating it until he discovered that she had given birth to his son before dying.

I was also fascinated by the mentions of Anakin Skywalker in this issue. The gang believes that Skywalker died a few years after the events of Attack of the Clones, and at the end of the issue allege that Vader killed both Padmé and Anakin on Mustafar. He admits that he did, and the others want to avenge the deaths of both heroes. This is perhaps the most obvious example of us having far more information than the characters in the story, but I think that actually works here to make it far more interesting. They believe that Anakin was truly a hero who was murdered, while in reality they are actually talking to the man who was once Anakin Skywalker.

So when Vader says, “Of course I did” when asked if he killed Padmé and Anakin, in a sense, he’s right. Palpatine told Vader that he killed Padmé, and it’s also true that on that day Anakin Skywalker – as far as any of the characters in this story are concerned, including Vader – died. That’s not ultimately true, as Luke Skywalker will prove, but that nonetheless is the prevailing thought. At the same time, I don’t want to read too much into Vader’s statement here, because I think it’s also likely that he’s saying it just as a way of acknowledging his evil and preparing to strike out against the others.

I’m extremely curious to see where things go next, and I’m all on-board this series now. I wasn’t sure about it through the first two issues, but this one was fantastic.