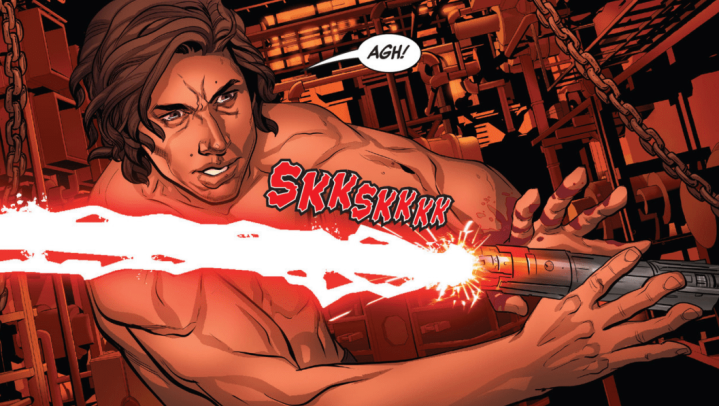 The brilliant four-issue comic series, The Rise of Kylo Ren, came to an end recently, and it did so with an action-packed final issue.

Written by Charles Soule and illustrated by Will Sliney, the fourth and final issue shows Ben Solo’s final descent to the dark side, as felt across the galaxy. And after this happens, and the Knights of Ren bow to their new leader, Ben leaves with them aboard their ship, the Night Buzzard.

Aboard the ship, Ben bleeds his lightsaber crystal – and for the first and only time (so far), we see Ben Solo’s eyes turn red. As he attempts to bleed the crystal, the energy is felt throughout the ship… and he gets a glimpse some of those closest to him: Luke Skywalker, Han Solo, Chewbacca, Leia Organa, Tai, and Lando Calrissian.

Once this arduous process is complete, Ben is left with a broken and bled kyber crystal, which he inserts into his lightsaber. But this results in an unstable beam that startles Solo, who deactivates the saber and installs a cross-guard – giving birth to the lightsaber we’re familiar with Kylo Ren using.

One of the really cool things about this is that Ben Solo is actually following in his grandfather’s footsteps. In Charles Soule’s tremendous Darth Vader comic series, we see the Sith Lord retrieve a lightsaber crystal and take it to Mustafar to bleed it… but in the process, he has glimpses of Palpatine, Obi-Wan, Padme, and Shmi. It’s a devastating and difficult process, as it seems like the Force itself is almost recoiling against the act. And here, Soule shows us Vader’s grandson, Kylo Ren, undergoing the same process.

But in a seemingly significant act, Ren’s crystal cracks in the process, leading to an unstable blade. For years now fans have speculated that this was because of the light still left inside Ben Solo, and it seems that might be the case. Here, as Ben tries to bleed the crystal, he is met with pictures of those who love him, and in the end his lightsaber is unsteady. Though nothing is confirmed, I do think that this comic lends credence to that interpretation, and makes it even more plausible than it already was.