Star Wars Resistance was back this week with another episode, and Kaz gets a chance to go undercover as a spy in a greater sense than ever: as a stormtrooper.

It’s another strong episode for a show that is really starting to pick up, and I very much enjoyed this episode.  Let’s jump in to our review: 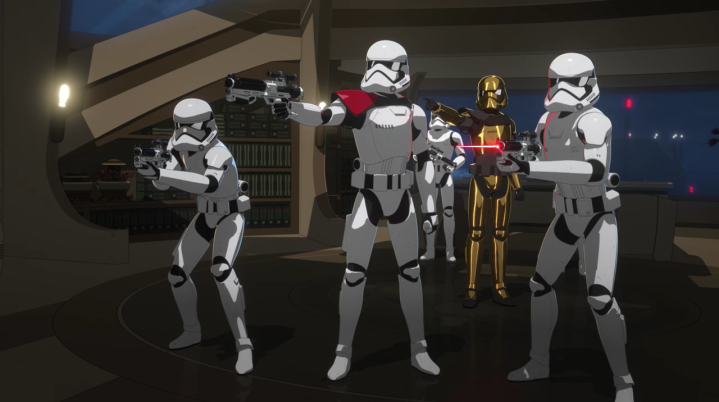 The events of this episode begin when the two children from Tehar, Kel and Eila, are caught by a First Order stormtrooper while fishing.  The stormtrooper wants to take them to report them for not having identification, but the children realize that they can’t go with him and therefore knock him unconscious.  This leads them to go to Kaz for help.  Kaz, meanwhile, is hanging out at Yeager’s shop with the others discussing the First Order; Tam still sees them as a good thing, but Yeager reminds the others that they weren’t around to remember the Empire.  The kids arrive asking Kaz to come with them to help, and BB-8, Neeku, and Tam come along.  They are led to the unconscious stormtrooper, which causes some panic amongst the others.  They take the trooper, CS-515, to the lower regions of the station, where Kaz devises a plan: he will take CS-515’s place and report back in with the First Order while Neeku and Tam watch over the actual trooper.

Kaz quickly finds himself with the CS stormtrooper squad, who are soon called to the marketplace due to a disturbance.  The people of the Colossus (mainly aliens, which is understandable due to the First Order’s taking after the Empire in hating aliens) have grown tired of the First Order’s presence and are demanding that they leave, throwing fruit at the troopers.  Kaz uses this disturbance to sneak away and boards the First Order transport, looking for information as to whether CS-515 reported finding the kids.  He soon has a run-in with a First Order BB droid, as the droid retrieves a data pad and Kaz wants it.  He tries to convince the droid to give it to him but has no success, so he ends up fighting the droid and prying the data away while knocking off the droid’s head.

He makes his way off the shuttle with the data pad, but his commander finds him and tells him that they have to go see Commander Pyre.  They do so in Captain Doza’s office, as Pyre tells Doza to leave so he can talk with his troopers.  There, Pyre reveals that Captain Phasma is sending a full garrison of armed troopers to the station, where they will seize control.  Citizens loyal to the First Order will be allowed to remain, but those not will be arrested.  Pyre then tells CS-515 to give his report, and after Kaz does so, Pyre tells the commander that his assessment was correct: CS-515’s conditioning is erratic, so he needs a brain wipe.  Kaz narrowly escapes and is pursued by stormtroopers.  He uses the marketplace uprising once again to escape, and with the help of Neeku and Tam slips CS-515 back into his armor, where the stormtroopers find him and take him away for a brain wipe.

Afterward, Kaz and Yeager take a look at the data pad Kaz retrieved, which contains a map of the galaxy.  Yeager guesses that the red dots on the map – of which there are plenty – indicate First Order fleet locations, but Kaz can’t believe it since not even the New Republic has that many ships.  But they realize that if the First Order has that many ships, they surely want the Colossus as a refueling station, and that they’ll do anything to get it.

This episode provided Kaz with the fullest chance yet to be a spy, as he went undercover in a stormtrooper’s armor.  I thought that the episode handled that really well.  Kaz didn’t blow his cover and was ultimately successful in his mission, yet others in the First Order weren’t just ignorant and oblivious.  I’ve appreciated that this show seems to have the First Order stormtroopers actually being competent, and this is another example: they noticed that CS-515 clearly wasn’t acting like himself.  They didn’t suspect that it was Kaz, but then again, I’m not exactly sure if anything should have made them suspect something besides the presence of another spy somewhere on the station.  So Kaz was competent in getting information and not totally blowing his cover, but the stormtroopers were competent in knowing that not everything was alright.

That leads right in to one of the most interesting takeaways about the episode, as we heard that CS-515’s conditioning was “erratic and perhaps even compromised,” as Commander Pyre says.  “Escort him to the transport for a full mental wipe and reprogram.”  This tells us some very interesting things about the First Order’s training of stormtroopers, reveals more insight into The Force Awakens, and could give us a hint of content to come in Episode IX.  In TFA, General Hux tells Kylo Ren that, “My men are exceptionally trained, programmed from birth.”  At the time, some wondered what he meant by that, but it could easily be explained as a rigorous training protocol that sought to so indoctrinate the troopers with First Order propaganda that they were essentially brainwashed.  But it turns out that they apparently were literally brainwashed.  This gives more meaning to what is about to happen to Finn at the beginning of TFA: Phasma orders him to report to reconditioning, and he’s obviously afraid of those prospects.  So what is reconditioning?  I’d guess it has something to do with this brain wiping.  The First Order apparently brain wipes their soldiers if they begin to show signs of nonconformity, and based on this episode it looks like they’re ready to do that even while on a mission (since they can do it on their shuttle).

All of this is making sense, but this episode doesn’t really treat a dissenting stormtrooper like a rare occurrence.  Commander Pyre and the others don’t seem shocked, and it doesn’t seem like it’s the first time they’ve dealt with it.  So it seems like there’s more than just Finn who has begun to question some things about the First Order.  If that really is the case, then I’m interested to see whether this becomes a more widespread problem for them in Episode IX.  If more and more troopers begin to question the teachings and actions of their cause, will we see them begin to take action?  We can only speculate at this point, but the idea of dissenting stormtroopers is nothing new to this sequel trilogy era.

The other main thing to discuss from this episode is that the First Order’s intentions are becoming clearer.  Firstly, they’re getting ready to seize control of the Colossus.  Since the First Order arrived on the station Captain Doza has been adamant that it’s still his station, but it is clear that he’s not really in control.  And from Pyre’s comments, we know that the First Order is about to send more troops and take control of the station by imprisoning those who don’t comply.  So the Colossus is likely about to fall into First Order control, so I’m interested to see what that means for Captain Doza.  Secondly, Yeager and Kaz begin putting together why the First Order wants the station.  They realize that it’s likely needed as a fueling station due to their massive fleet, which is a very logical explanation and one that fits well.  We also get more hints at just how massive the First Order military has become.  The New Republic didn’t really take them all that seriously, and a part of that was because they didn’t think the First Order presented much of a threat.  But in the Unknown Regions the First Order continued to grow in the shadows, and they amassed a massive military.  That’s why it’s safe to assume that their military might will still be quite vast in Episode IX even with the destruction of the Supremacy and other ships, because the First Order fleet is massive.  And while the Colossus is an obvious target, I wonder how many other worlds are being targeted by the First Order for similar reasons.

Ultimately, the people of the Colossus are going to have to deal with the First Order whether they want to or not.  We’ve already seen the citizens grow agitated, and we’ve seen Neeku recognize that they’re trouble.  In this episode, Tam begins to realize that as well.  She’s been the most pro-First Order of the main crew, seeing the First Order (and the Empire before them) as helping the oppressed and providing protection.  But through meeting the kids from Tehar and understanding what happened to their families, she begins to have some doubt.  She’s not yet against the First Order, but she’s starting to realize that they may not exactly be the good guys.  Along those lines, I appreciated getting brief looks into the past of both Yeager and Doza in this episode.  Yeager tells Tam and Kaz that they were too young to remember the Empire, and Yeager certainly would know about this since he fought against them.  Later, Pyre asks Doza why he left the Empire and the Captain says it was a personal choice and that Pyre wouldn’t understand.  Does that mean that Doza came to see the Empire as bad?  I really want to know more about the backstory of both of these men, as they’re connections to the previous era of Star Wars.

Overall, I thought this was another really great episode of Resistance, and I can’t wait to see where the story continues to go as we get closer and closer to the end of season one!