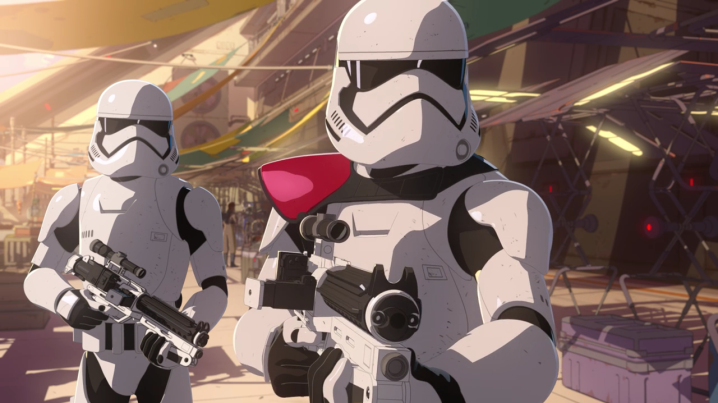 The intrigue surrounding Star Wars Resistance is really ramping up as the First Order’s presence on the Colossus becomes bigger and bigger.  After the events of last week’s terrific episode, when the First Order betrayed the pirates and staged a rescue of Torra Doza to make themselves appear to be the heroes, the First Order now has troops on the ground on the station.  And that, as you can imagine, makes life difficult.

Let’s jump in to our review of this week’s episode, “The First Order Occupation!” 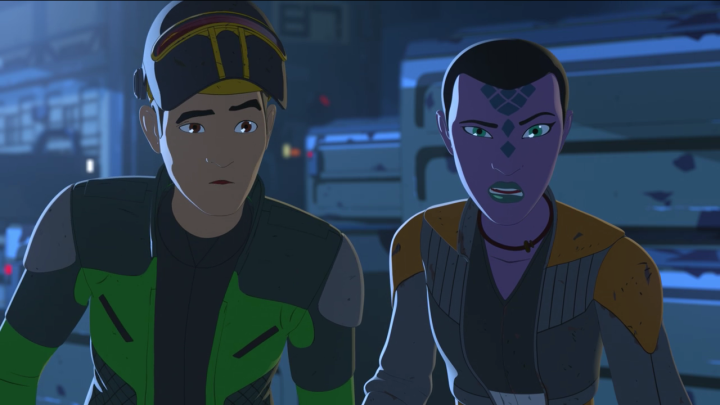 The First Order’s presence on the Colossus has really increased, as the residents have seen several TIE Fighters in the air and stormtroopers on the ground.  Neeku mistakingly assumes that Kaz must love it, since he is so interested in the First Order, but he tells Neeku and Tam that stormtroopers mean only one thing: war.  They think he’s overreacting, and Tam in particular sees the First Order as only doing their job and protecting the station.  The First Order troopers are mistreating citizens, as they’re looking for a spy.  Kaz intervenes and tries to help one of the citizens, which alerts the First Order to him.  Later, back at Yeager’s shop, Kaz and Yeager talk in private.  Kaz insists they must get an urgent message to Poe and the Resistance about the First Order’s occupation, but Yeager says that the First Order is surely monitoring all communications and that they should wait for Poe’s lead.  The stormtroopers soon show up at Yeager’s and want to question Kaz, as they’re looking for a pirate spy named Synara San.  Yeager tells the stormtroopers that Kaz is obviously no pirate, but they saw him hanging with Synara on the night Torra was kidnapped.

The stormtroopers get a lead on Synara and leave, ordering Kaz not to leave the shop.  Yeager encourages Kaz to sit this one out, but Kaz can’t do so.  He goes off to find Synara to warn her that the First Order is after her.  He and BB-8 sneak through the station and discover Synara talking with Kragen via hologram; she wants the pirates to pick her up but they say that she had her chance and must leave on her own because they can’t get near the station anymore.  Kaz continues to stealthily pursue her, and eventually he confronts her at the docks.  He reveals that she is in danger and that she must escape.  Kaz devises a plan, as he hides Synara in a crate and disguises himself, pushing the crate to one of the cargo ships – the only real way to sneak off the platform with the First Order occupation.  He sneaks Synara to the ship, but as BB-8 is trying to bypass the ship’s systems to open the door he accidentally sets off a security alarm.  Synara stows away on board while Kaz and BB-8 lead the stormtroopers away from the ship.  They soon reach a dead end, but before the troopers catch them Synara surprises them and knocks them out.  She came back for them, but by the time she returns to the ship it has taken off.

They then turn to Neeku, who knows the station better than anyone, asking how to sneak her out.  After much thinking, Neeku suggests the escape pods under the water.  As they’re heading toward the lift, the stormtroopers find them and continue their pursuit, so Neeku creates a distraction and leads the troopers away.  Kaz sends BB-8 to aid Neeku and then heads off with Synara to take the elevator down to the lower levels of the station, where Synara gets in the final escape pod, says goodbye to Kaz, and blasts off.  The stormtroopers eventually make their way down to the lower levels (after BB-8 successfully drew them away from Neeku), but discover they are too late and that Synara has taken off.  She contacts Kragen and sends him her coordinates, and he arrives to pick her up from the middle of the ocean and take her home. 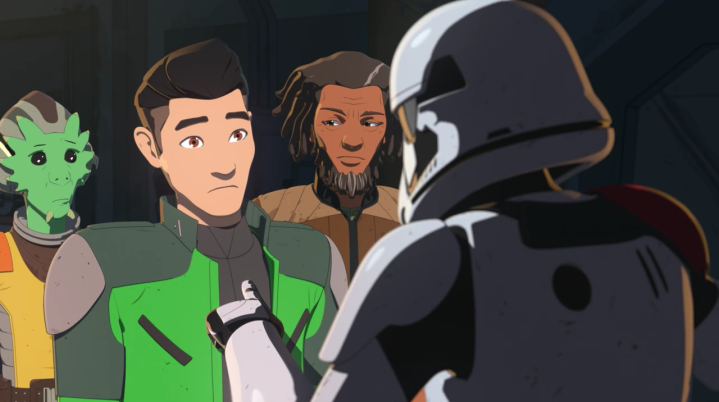 This episode maintained a tension throughout as the First Order pursued the pirate spy.  It makes perfect sense that this would be the episode immediately following last week’s installment, as after the First Order crossed the pirates they’d surely want to eliminate any spy that could betray their secret involvement.  I’m sure that the First Order will soon come to suspect a Resistance spy is also on the station, but for now they’re primarily concerned about finding this pirate spy, and rightly so.  Once again, Synara plays a pivotal role in the plot, and her relationship with Kaz continues to deepen.

On the one hand, I wondered whether Kaz would distrust Synara more after he discovered that she was a pirate last week, but in this episode he explains that even though she’s a pirate, he’s seen enough to know that she’s a good person.  As we’ve seen all season, Kaz is a nice guy who genuinely cares for others and is always looking to see the best in them.  This is a redeeming quality of his that more than makes up for some of his incompetencies at time, so it’s not really a surprise that he’d still be willing to help Synara.  I wish that we would have seen a little more of Kaz working through that discovery, but I get why Resistance couldn’t spend too much time on it.  And besides, he clearly likes her (as BB-8 points out), so of course he’s going to be a bit more willing to overlook flaws, to help however he can, and act a bit awkwardly around her.  That all makes sense.

So really, most of this episode was about Synara trying to get off the station.  The first few minutes of the show set up the First Order occupation and revealed that they know Kaz is connected to Synara, while it also shows that Captain Doza isn’t happy that the stormtroopers seem to think they have more authority than him.  But for most of the rest of the episode, it’s all about Synara escaping.  I have pointed out that in recent episodes Kaz has really seemed to grow far more competent at spying, and that was once again true: he stealthily tailed Synara, but then he also managed to sneak her onto the loading dock, and later down to the lower levels.  Sure, he had some help, but he continues to show growth in coming up with plans and executing them, while he’s a much better spy now than he was earlier in the season.

Kaz’s growth is remarkable, but Synara’s is probably more evident.  She is a pirate, but she’s clearly become disenfranchised from all of that.  The pirates don’t really care for her and she’s found a new (and more caring) family on the Colossus.  She proves that in part by going back to help Kaz instead of leaving right away.  So even though she is rescued by Kragen at the end of the episode and heads back home, I think it’s obvious that she isn’t fully committed to the pirates, and I’m sure that she will show up again pretty soon.

I also thought it was very interesting to see how people react to the First Order being on the station, since Kaz is the only one we see really have a major problem with it.  Neeku doesn’t understand why the First Order is bad until late in the episode, where he and Synara have a short but heartfelt conversation about the Empire’s racism toward aliens (and how the First Order is probably the same way, since they rose from the Empire).    Tam has the most positive view of the First Order of anyone we’ve seen yet, as she thinks they’re protecting the station and are doing their job.  Captain Doza doesn’t like the occupation, but we have yet to see his true feelings – only hints that he doesn’t really want to embrace the First Order but feels it’s a necessity.  I want to see more of how Doza reacts, as well as Yeager – since they both can remember the days of the Empire.  And speaking of Yeager, it seems like he’s more willing to help Kaz’s mission now, but he still has to be the voice of reason and make sure that Kaz isn’t being stupid or getting the others into trouble.  We haven’t really seen a whole lot of Yeager recently, so I’m hoping that will change soon.

Overall, I thought this was a very solid episode that sets the tone moving forward.  Now that the First Order is on the station, the tension will only continue to increase and life will only continue to get harder for Kaz.  And since Synara took the last escape pod, that means that Kaz is essentially stuck on the station.  So now that the First Order has a far more direct presence on the Colossus, I think things are about to get a whole lot more interesting for everyone involved.