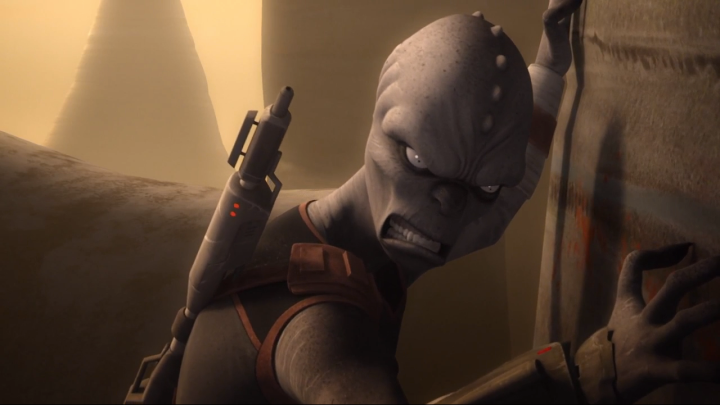 Thrawn’s assassin bodyguard from the Heir to the Empire trilogy was confirmed to be appearing in Star Wars Rebels this season, voiced by Star Wars veteran Warwick Davis, and we got our first look at the character in the seventh episode of the year, “Kindred.”

But it wasn’t just Rukh that made the first episode of this week’s double-feature great, as there was much, much more – including more intrigue with the Loth-wolves and a moment that fans have been waiting a long time for.

Let’s jump into the review, but as always, full spoilers are ahead: Picking up right where last week’s episode left off, the Ghost crew sets out to recover the hyperdrive that Ezra and Sabine had left hidden in the mountains.  Ezra and Jai (disguised as Scout Troopers) along with Zeb go to transport it back to camp, but they run into trouble.  Grand Admiral Thrawn informs Governor Pryce (who is overseeing the TIE Defender crash site investigation) that he is sending his agent to deal with the rebels, and soon after Rukh arrives.  He smells the Lasat and others and takes off on all fours in pursuit after them.  Ezra and Jai try to talk their way out of it by pretending to be troopers, but Rukh doesn’t buy it and instead punches Ezra in the face, proceeding to attack.  Ezra and Jai take off on a speeder, with Rukh and a few actual Scout Troopers in pursuit on their own speeders.  Rukh pulls out his electro-staff and engages Ezra in combat while the speeders are flying, but soon he has to disengage to avoid a rock.  Rukh fires a hidden tracker onto the other speeder, however, and though Ezra and Jai get away Rukh now knows exactly where the camp.  Meanwhile, Zeb successfully stole an Imperial troop transport and got the hyperdrive to the rebel camp, where Sabine installed in onto the U-wing for Hera to try to get the data from the TIE Defender back to Rebel Command on Yavin 4.  While that was going on, Kanan and Hera had a heart-to-heart talk, with Kanan asking her when she’ll have felt she’s done enough for the rebellion.  Hera said she hadn’t thought about it, with Kanan saying that she hadn’t thought about them yet then – but just as they leaned in for a kiss, it was interrupted once again for the second straight week.  Soon enough, however, Governor Pryce, Rukh, and the Imperials were upon the camp, meaning Hera had to leave immediately.  Kanan apologized for the conversation earlier, but Hera pulled him in and kissed him.  In a moment of humor, Sabine saw it and nudged the others, who all turned and smiled as they watched.  Hera then got into the U-Wing, told Kanan “may the force be with you,” and then took off with Chopper while the others sought to repel the Imperial assault.  Hera manages to get past the blockade, pulling a visually-awesome stunt as she goes to hyperspace through one of the other ships, much to the dismay and anger of Thrawn.  It was then that Ezra saw the Loth-wolves in the mountains, however, and led the Ghost crew in pursuit after them.  Before long they caught up, and Ezra realized that the Loth-wolf (the same one that helped him last week) really was looking at Kanan.  The wolves then led them into a cave, and then mysteriously transported them halfway across the planet.  Now in a cave in a mountain on the other side of the planet (which looks like the old Lothal we’re used to, with plenty of grass and life), Kanan and the wolf come face-to-face, and the wolf again says, “Dume.”  Kanan is shocked, and he explains to Ezra that it’s his real name: Caleb Dume.  Kanan explains that the wolf is strong with the force, in a way that seems as if it has a purpose.  Kanan explains that he thinks it means that there’s something far more sinister going on on Lothal than the TIE Defender factory.  Ezra says that it seems like all the paths are coming together now, and to that Kanan responds that he’s just not sure they’re going to like where it leads.  The episode ends as Kanan tells Ezra that he knows Hera made it out, and then we see Hera giving the data to Mon Mothma on Yavin 4. There was a lot going on in this episode to mention.

All things considered, this was another terrific episode in what has been an extraordinarily strong season of Star Wars Rebels.  I love the continuity between the episodes, as it’s really telling one main story.  This episode had Rukh’s first appearance and he lived up to expectations, but it was the intrigue surrounding Kanan that stole the show.  We finally saw him and Hera kiss, but it was an ominous farewell… and the wolf clearly wants something from him.  There’s a lot of questions after this one, for sure, and it will be interesting to see where the season goes moving forward.