Star Wars Rebels returned this week with the third and fourth episodes of the final season, titled “In the Name of the Rebellion.”

After their mission on Mandalore, the Ghost crew is reunited on Yavin 4 before being sent on a daring mission that – of course – doesn’t go as planned, leading to Ezra and Sabine teaming up with Saw Gerrera for another radical mission.

I loved this episode, so let’s break it down briefly with a summary and then my review.  Of course, full spoilers for the episode are ahead, so if you haven’t seen it yet and don’t want to be spoiled then don’t read any further. 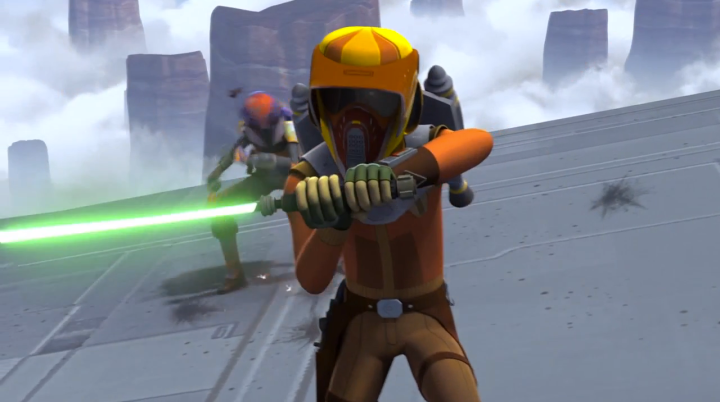 The episode sees the Ghost crew finally get involved with the Rebellion as a whole.  It starts off with Ezra, Sabine, and Kanan arriving at Yavin 4 following their victory on Mandalore, and they soon meet Zeb and Rex before realizing that Hera’s Y-Wings (including ones piloted by Hera and Wedge) are coming in hot and severely damaged.  Hera is reunited with the Ghost crew and Kallus soon arrives, informing them that Mon Mothma wants to meet with them.  Upon arriving, Bail Organa informs them that a new Imperial communications outpost allowed the Empire to know of Hera’s mission sooner and thus stop it, so it is decided that the Ghost crew will infiltrate the outpost and hijack the satellite so that they can keep up with Imperial transmissions.  Ezra is frustrated that they’re not doing anything to help Lothal, but Mothma talks with him about how Chandrilla and so many other planets also need help too.  Ezra talks with Kanan while they’re meditating about how they’re choosing to fight and whether they’re choosing the wrong side, at which point a droid transmits a massive holographic Saw Gerrera, who has a conversation with Mon Mothma.  Gerrera thinks the Rebellion is doomed because they keep playing by the rules, whereas Mothma gets fiery and says they cannot stoop to become like the Empire.  The Ghost crew arrives at the communications outpost and Ezra, Sabine, and Chopper skydive onto the satellite to avoid detection.  Unfortunately for them, however, an Imperial Star Destroyer arrives captained by Brom Titus, and Ezra tries to send them away by portraying an Imperial officer… Brom Titus.  The rebels are soon found out, so Sabine pulls out some explosives to attempt to blow up the satellite.  Ezra and Sabine fight troopers on the satellite while Hera’s rescue pickup is thwarted by TIE Defenders.  The Ghost flees and Zeb can’t shoot the shielded ships down, but while Hera acknowledges that the Imperials have the better ship, the rebels have the better pilot.  Kanan asks if she wants to test the theory, and he tells her to send the ship down into the fog – trusting the blind Jedi to see the way.  It works, but by the time they get back Ezra and Sabine have been rescued by a U-Wing fighter and Saw Gerrera, who rescues them and blows up the satellite and Titus’ Star Destroyer.  Hera demands that he return her kids, but after another Star Destroyer arrives Gerrera jumps to hyperspace with Ezra, Sabine, and Chopper still on-board the ship as he takes the controls alongside Two Tubes.

It turns out that Gerrera has been trying to find out what the Empire is up to since their encounter on Geonosis, and he found out that a shipment at a civilian outpost was key to whatever it was that the Empire was doing or building.  So he enlists Ezra, Sabine, and Chopper to help him infiltrate the ship and figure out what’s going on.  Sabine disguises Chopper so that he’s able to sneak them onboard in a shipping container, and they soon find cargo: prisoners, technicians kidnapped by the Empire.  Saw wants to leave them to continue searching, but Ezra wants to save them.  He has Chopper lead them to the escape pods to be ready when they drop out of hyperspace, but as Saw, Ezra, and Sabine are heading to disable the hyperdrive, Ezra begins hearing music-like noises coming from a room.  Sabine gets the door open… and they encounter Death Troopers!  Saw opens fire right away and the sides engage in battle, with the Empire eventually being driven back.  It is revealed that the important cargo is a massive kyber crystal.  The surviving Death Trooper informs command to let Director Krennic know what’s going on and to rally to stop the rebels.  Saw wants to stay on board until they figure out the destination, but Ezra and Sabine want to cut the hyperdrive now.  They head to do so, but are betrayed by Saw, who stuns the two and brings the crystal to the control room.  They arrive at the destination, but there’s nothing there – it’s simply a rendezvous point.  Two Tubes shows up with the U-Wing and Saw leaves, but not before damaging the unstable crystal, essentially creating a ticking time bomb.  He offers Ezra and Sabine a chance to escape with him, but the two realize they can’t leave the prisoners behind.  So they send for Chopper and the prisoners to meet them in a hanger with an Imperial Shuttle, and there Chopper, Ezra, and Sabine show off some heroics in defending it and escaping.  Sabine expertly pilots the ship so that when the crystal explodes, it takes out the Star Destroyer but not them… though their shuttle is entirely disabled.  Luckily, however, Hera shows up in the Ghost to rescue them, having been alerted by Chopper of their location. 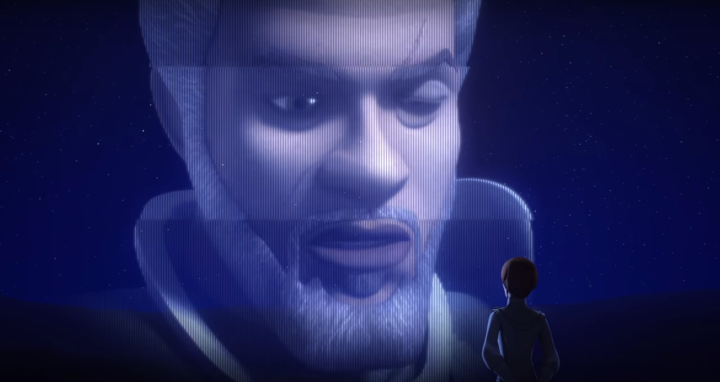 I thought these episodes were fantastic, as they simply felt like Star Wars and tied incredibly well into Rogue One and A New Hope.  On that note, the references were numerous.  We saw the Rebels finally arrive at Yavin 4, and the scenery and interaction with the characters (like Mon Mothma, Jan Dodonna, Bail Organa, etc.) was great.  We’re getting closer to the Rogue One/A New Hope timeline, and that means seeing Yavin 4.  That was cool.  But there were plenty of other connections too, especially with Rogue One.  The Saw Gerrera one is the most obvious, as this episode really helped to give a lot of backstory as to his radical methods and why the Rebellion is hesitant to associate with him.  Additionally, Saw continues to look into a potential super-weapon the Empire is creating, which leads him on a mission to discover something from Jedha – a massive kyber crystal!  Remember in Rogue One the Empire is just about done harvesting the kyber crystals from Jedha, so this ties in perfectly.  Death Troopers guard the shipment, and after the captain is on the run she informs command to contact Director Krennic.  So the tie-ins with Yavin 4, Saw Gerrera (and Two Tubes!), a U-Wing in action (not to mention Y-Wings!), the Death Star shadow through hints, Death Troopers, a kyber crystal from Jedha, and a Director Krennic reference, this episode really tied in to the saga as a whole, and not in a way that felt forced either.

It was fascinating to see Saw Gerrera and the way the characters approached him.  Near the beginning some of the characters wondered how Saw got better intel than them, and it was made clear that he did so by stooping to a lower level.  Ezra openly wonders whether Saw’s way is right, and even Sabine and Hera feel that tug too.  It was a nice contrast in the show: even though the heroes (even the voice of reason in Hera) thought some of the same things Saw did, they didn’t stoop to that level in their actions.  Saw refused to help the prisoners and endangered their lives by damaging the kyber crystal, but Ezra and Sabine rescue them.

The best interaction with Saw – and probably the best scene in the entire episode – was the conversation between Saw Gerrera and Mon Mothma on Yavin 4 (albeit with Saw through a hologram) as others watched.  Saw accuses the Rebellion of playing by the rules and feels that they’re going to lose, bringing out a fiery side of Mon Mothma we really haven’t seen before.  She’s always the calm and collected one who wants to promote a peaceful resolution if at all possible, but she rages, “You target civilians!  Kill those who surrender!  Break every rule of engagement!  If we degrade ourselves to the Empire’s level, what will we become?”  Saw responds to that by saying that’s the kind of leader the Rebellion needs – one with that fire.  Genevieve O’Reilly and Forest Whitaker really knock it out of the park here in the discussion, and it’s a tremendous scene with a lot of weight and significance as we see the disagreements between the two on how to rebel.

Besides tying into the larger saga, the episode also just felt like Star Wars.  The scenery of Jalindi was breathtaking, and the entire attack on the satellite dish was great – from Ezra, Sabine, and Chopper skydiving onto it to the fight with the stormtroopers on top of it (with Chopper rotating the dish as a cool variable), and the Ghost’s dogfight in the air and through the fog was tremendous.

Any qualms I had with the episode were relatively minor.  For example, seeing the Death Troopers was great (as was the smoky setting for the confrontation), but the only way to really understand their capability was through Saw’s immediate use of switching to lethal force (after simply stunning the regular stormtroopers earlier), which was a nice touch but unfortunatley not followed by an exploration of the Death Troopers’ threat.  Furthermore, I really wish they would have kept the Death Troopers’ voices garbled instead of having actual voices.  I can understand having the captain talk normally with others, but at least during the battle I wish they would have kept it scrambled.  Another one, which I mentioned last week, is that it’s just weird to see a character using a lightsaber (in this case Ezra) to only take out an enemy’s gun.  It seems the show refuses to show any lightsaber fatalities, and while it’s a minor detail, it adds up over time and grows tiresome.

Overall, I thought this was a simply terrific episode of Star Wars Rebels.  The connections to Rogue One were tremendous, it was fun and felt like Star Wars, and it had some incredible scenes like Mothma’s conversation with Gerrera and the attack on Jalindi.  If this is a hint of what’s to come this season on Rebels, I can’t wait.